People Want to Ban This Famously Inappropriate Artwork, but Is Censorship the Answer?

In recent months, a day barely passes that another woman doesn’t come forward to report a terrible experience of sexual assault. It seems safe to say, considering all the allegations affirmed true and admitted to by various men in power, that this is a cultural problem whose claws dig deep. Change must obviously be affected and lines must be redrawn, but is asking for the removal of sexually disturbing artwork from museums taking it a bit too far?

Recently, a petition started by New York City resident Mia Merrill and signed by almost 9,000 people brought this very question to the fore, demanding that the world-renowned Metropolitan Museum of Art remove an artwork from their gallery due to it being particularly suggestive.

The work in question is Balthus’s 1938 painting Thérèse Dreaming, which depicts a 12–13 year old girl in a pose that some may describe as suggestive. Her hands are behind her head, her eyes closed and her underwear can be seen. A cat drinks milk at her feet. Safe to say, it’s not how we should witness a pre-pubescent girl, but art is not always an ideal depiction of reality. 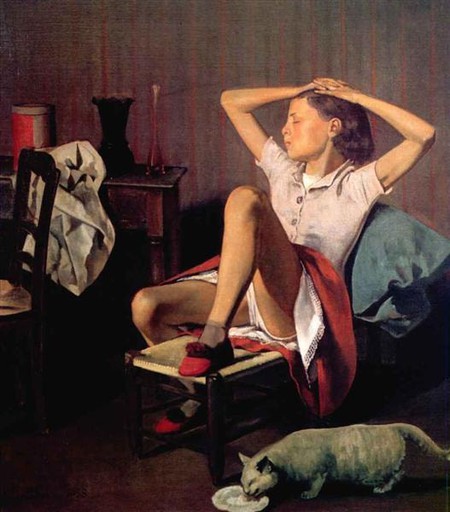 The Met did not give into the pressures of the petition and responded with a strong stance to keep the painting on display. A spokesman for the institution explained: ‘The Metropolitan Museum of Art’s mission is to “…collect, study, conserve, and present significant works of art across all times and cultures in order to connect people to creativity, knowledge, and ideas.” Moments such as this provide an opportunity for conversation, and visual art is one of the most significant means we have for reflecting on both the past and the present, and encouraging the continuing evolution of existing culture through informed discussion and respect for creative expression.’

In other words, a morally questionable painting does not so much promote that morally questionable point of view, but rather provides an important opportunity for discussion and growth. The museum argues that censorship does not bring change and stands by their decision that removing historically significant artworks is not on the table at this time.

Since the museum’s response, Merrill has changed her initial request, calling for more context surrounding the painting to be provided, instead of its removal. She told Artnet, ‘I am not asking the Met to destroy the work. I’m asking them to be more conscientious in how they contextualize pieces. This can be accomplished by either removing the piece from this gallery or by providing more context in the painting’s description.’

Presumably, the ‘context’ Merrill calls for would allude to the fact that Balthus is quite infamous for his often uncomfortably sexual portrayal of young females. By educating viewers on this fact, the Met would not only be distancing themselves from any unintentional promotion of illicit behaviour, but also giving their audiences an opportunity to begin their own debates as to whether or not a morally cloudy work is valid as well as how viewing it and talking about it can perhaps take culture in a better direction.

Is providing context how we solve these types of dilemmas in the future, or do we leave art entirely alone? Are paintings nearing a century in age really something we need to remove in order to make the necessary changes our world needs?

This is a big question with multiple layers when it comes to an answer, but definitely one worth considering as we attempt to navigate new realities and combat the stigmas surrounding assault and speaking out.