In Bed-Stuy, a Confluence of Cultures and Cuisines 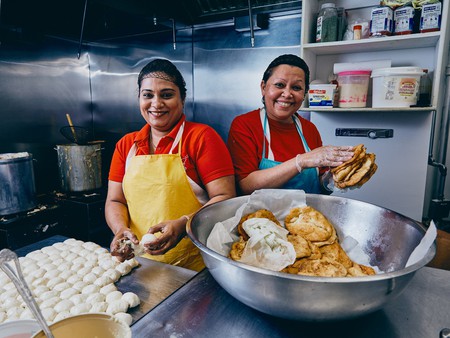 Bed-Stuy in Brooklyn serves as a hub for Caribbean and Latin food, thanks in part to A and A Doubles and Pilar Cuban Eatery | © Zack DeZon / Culture Trip

Bedford-Stuyvesant, Brooklyn, is a haven for a diversity of cuisines. The neighborhood is particularly beloved for A&A Bake and Doubles, a Trinidadian snack shop, and Pilar Cuban Eatery, a Cuban restaurant with an attached bakery.

Latin American and Caribbean food is the soul of Bed-Stuy. There’s A&A Doubles, a no-frills shop boasting the eponymous doubles, a beloved Trinidadian street snack made from fried bread and chickpeas. Down the street, you can find the riches of Cuba at Pilar Cuban Eatery and its next-door bakery, where the scents of freshly baked bread and roasted pork coalesce as soon as you enter the establishment. These restaurants seek to uphold the traditions of their countries’ foods, proudly showcasing their pride in their cuisine and culture. 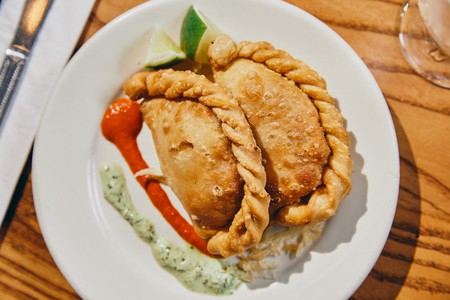 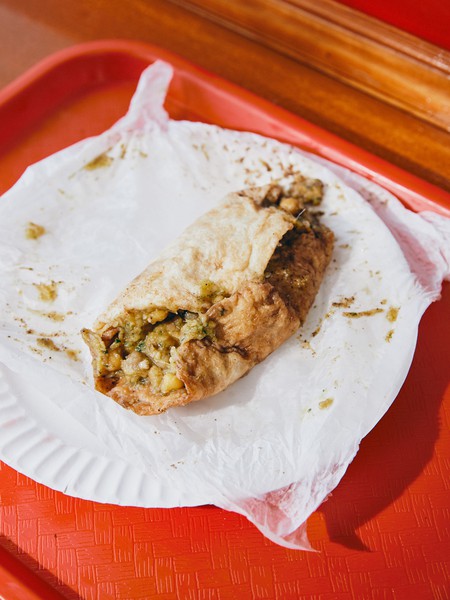 The Trinidadian doubles start off with sweet fried bread, which is stuffed with spiced chickpeas | © Zack DeZon / Culture Trip

Ricardo Barreras is the man behind this Cuban food operation. A first-generation American, he was raised in Miami by Cuban immigrants who immersed him in Cuban culture and cooking. Leaving South Florida for graduate school in New York City was a bit of a transition for him – especially when it came to finding the kind of food he was used to from back home. 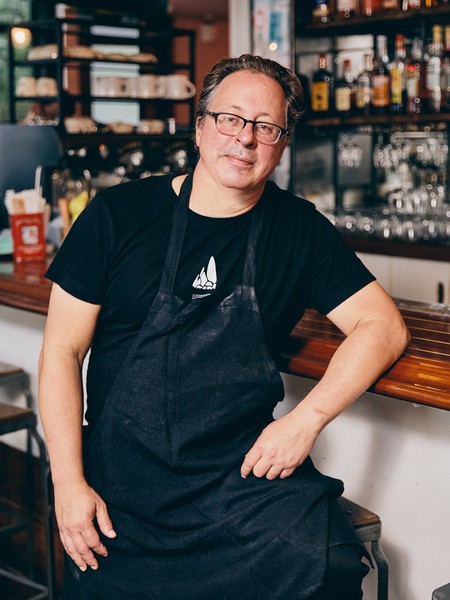 Barreras had been whipping up the food he’d been raised on since he was 13 years old – but he had come to New York City to study psychology, not cook. It wasn’t until he grew weary of staring at his computer all day that he decided to launch his own restaurant. 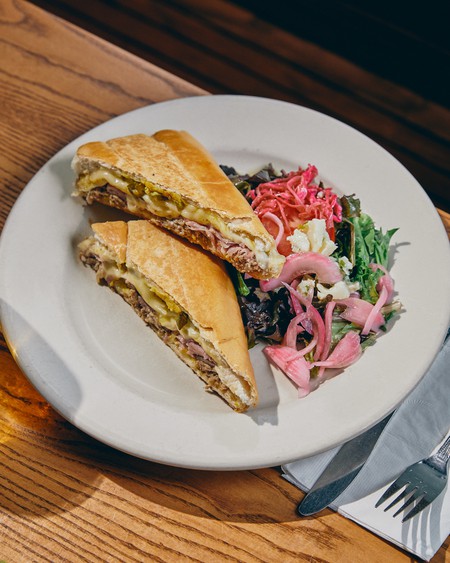 Cuban food is heavily influenced by Spanish cooking, which makes sense: Cuba was among the last of Spain’s colonies under the Spanish Empire. There are plenty of dishes in Cuban cuisine that are direct descendants of Spanish food, like croquettes: crispy rounds often stuffed with cod, bits of ham, potato and cheese. The cuisine is also peppered with a showering of ingredients from Africa and the Caribbean.

At Pilar Cuban Eatery, Barreras flaunts a mix of traditional Cuban food and dishes that have a more modern flair. There are Cuban sandwiches – jammed with layers of roasted pork, ham, Swiss cheese, pickles and mustard, and pressed on long batons of bread. You can spoon at platters of arroz con pollo (a classic Cuban dish) – hunks of chicken and short-grain rice swimming in a saffron broth bobbing with peas and roasted red peppers – or Cuban-style paella, tossed with house-made chorizo, shrimp and mussels. 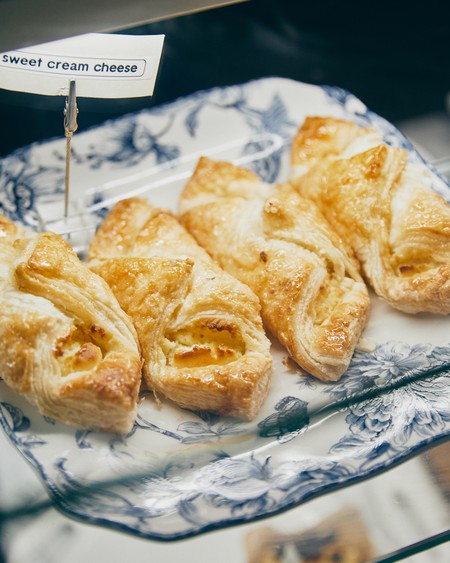 Swing by the bakery next door and you’ll be greeted with the kinds of sweets familiar to Cuban bakeries in Miami. The case houses Key lime pies, tres leches custards, tropical layer cakes and coconut-chocolate bars. You can wash it all down with a café con leche, or move on to something savory: braided empanadas plump with scrambled eggs, cheese and chorizo; tostada (Cuban toast) brushed with pimiento and ham; and tamales rolled with cod. Cuban bread – quite tricky to locate outside Florida – is baked on the premises, some made with lard, some sweet and speckled with egg.

Both the bakery and the restaurant have served as a beacon for the Cuban community and Bed-Stuy locals generally. Pilar brims with people who come from out of town, from the other four boroughs, as well as people who live just down the street, all coming together over mugs of Cuban coffee and roasted pork sandwiches.

“When people recognize [all we do], that’s my favorite part: when they get what we’re doing and the lengths that we go to make the best-quality Cuban food,” Barreras says. 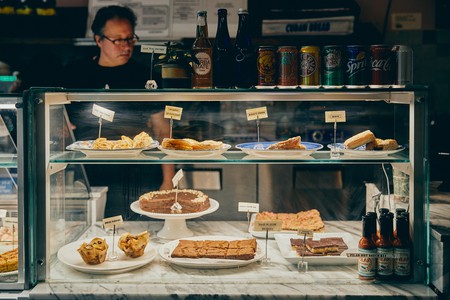 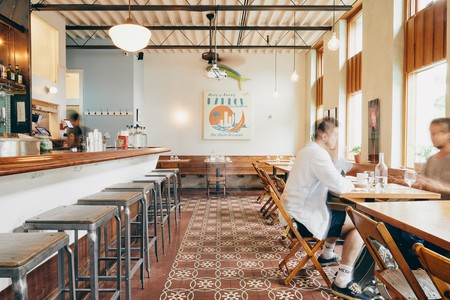 Crowds have been spilling out of A&A Bake Doubles & Roti on Fulton Street since 2002, patiently waiting for a paper bag of doubles. The line moves quickly, thankfully, swerving into the space and along the counter, where an assembly line of cooks diligently and expertly weaves together one of Trinidad and Tobago’s beloved national dishes: doubles.

A routine snack or breakfast in Trinidad and Tobago, doubles were born out of a bit of serendipity, thanks in large part to the locals. A man named Mamudeen sold bara (sweet fried dough), and then started hawking chana (curried chickpeas) separately. Soon, customers began asking Mamudeen to double the bara, and load the chickpeas into the fried dough – and thus the dish got its name. It’s a dish rooted in the community – an arguably crowd-sourced idea, born out of Trinidadians. 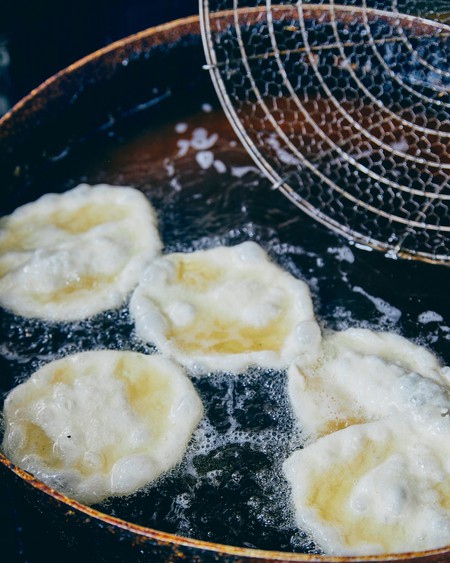 Nowadays, doubles are quite ubiquitous in Trinidad, but that’s certainly not the case everywhere. But Bed-Stuy’s A&A is known as Brooklyn’s king of doubles, thanks to Geeta and Noel Brown, the couple behind the shop. 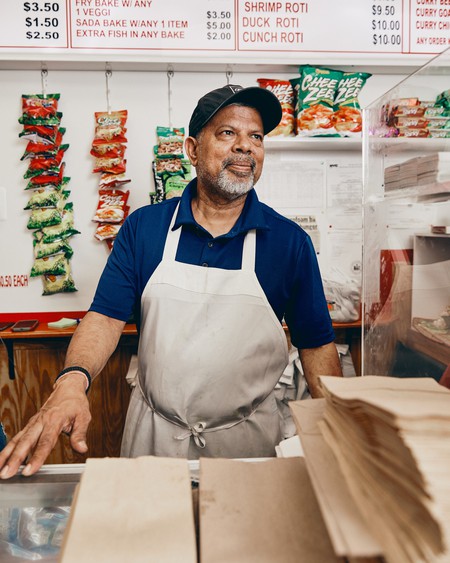 Here, they dish out the sloppy sandwich, molding dough into tight balls before flattening them out and frying them in hot oil. The disks of golden-brown bara glisten with pockets of oil before two pieces are pressed together, ladled with a mountain of chickpeas, delicately rolled into wand-shaped mounds and flipped in white paper. One bite reveals a breadth of flavors: the sweetness of the fried bread, the tamarind laced through the chickpeas, bits of hot pepper, and mango and apple sauces drizzled on top. The doubles can be accommodated to suit anyone’s spice level: slight, mild or spicy. At a mere $1.50 apiece, it’s certainly one of the cheapest snacks around. 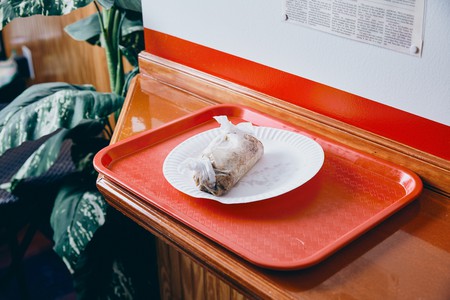 Although most customers walk away with doubles, there are plenty of other Trinidadian dishes on the menu too: round rolls called “bakes” stuffed with saltfish, corn beef and shark; roti bursting with goat; and plump rounds of dough, called pholourie, slick with chutney.

When the crowds dwindle, you can snag a seat at one of the tables up front, prepped with a red plastic cafeteria-style tray and a Trindadian soda. Or do as the locals do and grab a paper bag to go, unfurling the white paper off your warm doubles as you walk down Fulton Street. 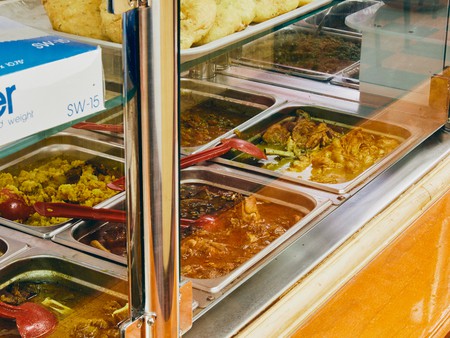 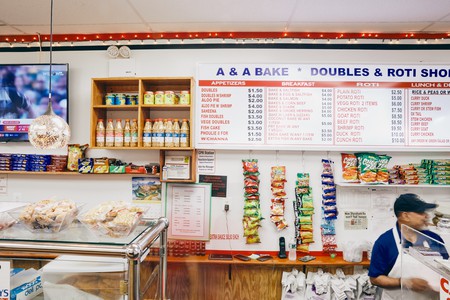 The Trinidadian establishment serves a host of street food, from doubles to bakes and roti | © Zack DeZon / Culture Trip
Give us feedback