Explore the Ruins of Van Slyke Castle at Ramapo Reservation 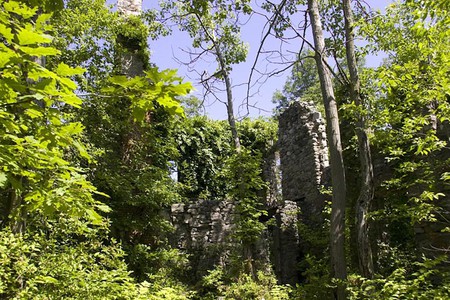 The ruins of the castle | © njhiking.com

Tucked away in the hills of Ramapo Reservation are the haunting and crumbling remains of a former early 1900s castle. Once inhabited by the widow of a wealthy businessman, Van Slyke Castle now sits in the middle of a local hiking area overgrown by earth and entangled in unforgiving vines. Want to learn more? Here’s your need-to-know guide. 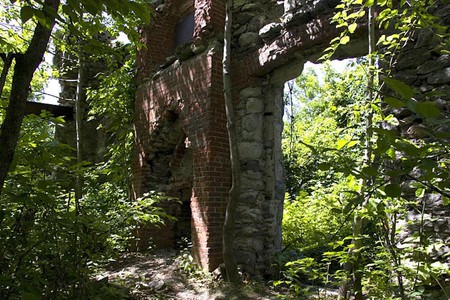 The castle is hidden amid verdant scenery I | © njhiking.com

The history of Van Slyke Castle

In 1906 a nurse named Ruth A. Coles married a man named Charles E. Halliwell, a prominent businessman and captain of industry in New York, whom she had cared for when he was in hospital. After Halliwell passed a year later, he left her one and half million dollars. Ruth got remarried to a wealthy stockbroker and family friend, William Porter who had begun constructing the mansion, at which time was called Foxcroft, named after its location on Fox Mountain. Porter died in a car accident before he could see the mansion come to completion, and it was left to Ruth who married her third husband, Warren Van Slyke. It was after him that the castle got its name (it is also known as Foxcroft, to be fair to the late Porter who named it) and in 1925, after Van Slyke passed, Ruth lived in the castle until her death at the age of 63 in 1940.

After being left to her family, Van Slyke Castle was immediately sold and entrenched in a bitter divorce. Ultimately, this was what brought the castle to its fateful end when the abandoned structure was sadly torched by vandals in 1959. 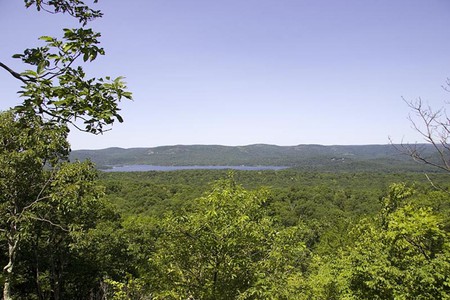 The spectacular forest setting of the castle I | © njhiking.com 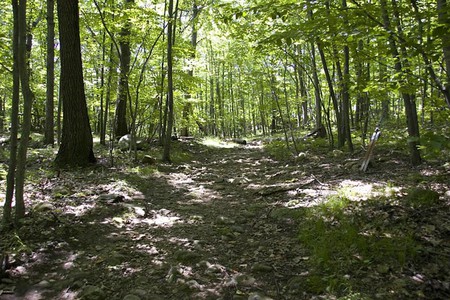 Explore the forest’s pathways I | © njhiking.com

There are a number of hikes that will take you to Van Slyke Castle, but to start, take this simple and easy trail. Begin on the blue blazed McEvoy Trail and continue on until you reach the dam. From there, stay left on the yellow blazed Hoeferlin Trail and continue on the dirt road. Eventually, the Hoeferlin joins up with the red blazed Lookout Trail which has both yellow and red blazes, so do be aware. This begins a short climb to a scenic and rocky vista point, which then descends down through a portion of Mount Laurel – here you’ll spot the castle ruins just off the beaten path. Once the red and yellow trails split, turn left to stay on Lookout Trail, and you will briefly hike over a few small ridges. From here, the trail will take you back down to the dam where you can make your way back to the car. 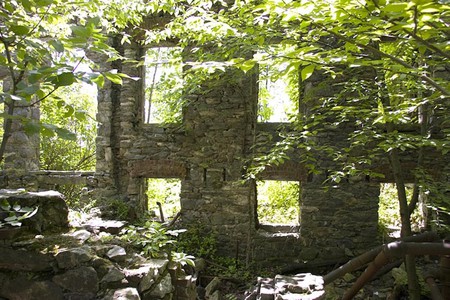 The atmospheric ruins I | © njhiking.com

When visitors come to explore Van Slyke Castle today, all that’s left is decades-old rubble from the fire long ago. However, it’s not hard to make out the former stone structure underneath the vines and overgrowth that gives the place a haunting and sad beauty. Step “inside” the arched entryway and you will immediately get a sense of the magnitude of this old mansion. There were large rooms, a fire place, a balcony that overlooked the lake and land below, plus the outline of what was once a large swimming pool.

On a clear and sunny day you can see the New York City skyline in the distance, and as the sunlight streams through the lush forest, you can get a sense of how majestic this place once was.