Theater: 'Once on This Island' Sends a Warm Breeze From the Caribbean 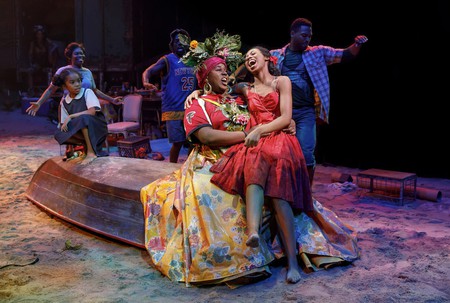 The exuberant revival of Lynn Ahrens and Stephen Flaherty’s tropical musical is a tonic for chilly times.

The dreaded polar vortex has descended on America’s Northeast; the days are getting shorter, the wind is biting, and the thought of getting away to the balmy Caribbean is more alluring than ever. For a quick theatrical getaway to a tropical island, head to the rousing revival of Once on This Island. You don’t even have to worry about security lines and airline cancellations (just subway delays).

Ahrens and Flaherty’s musical debuted in 1990 and made a star of leading lady LaChanze. The female protagonist in this new and wonderfully intimate production at Circle in the Square is played by 18-year-old Hailey Kilgore. Singing and dancing with plenty of heart, she’s a worthy successor to LaChanze. 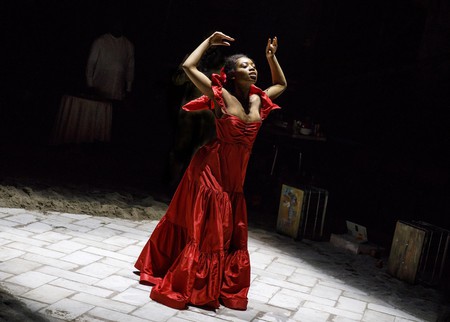 Kilgore plays Ti Moune, who becomes orphaned following a big storm on her island in the French Antilles. An older couple (Kenita R. Miller and Merle Dandridge) takes her in and raises her. When a teenage boy, Daniel (Isaac Powell), is injured in a car crash, Ti Moune nurses him back to health. Not surprisingly, they fall in love. But Daniel is from an aristocratic French family and Ti Moune is a peasant, so his family won’t allow them to marry.

It’s a simple story, but Ahrens and Flaherty’s Caribbean rhythms and lilting melodies combine with Michael Arden’s imaginative direction of the energetic cast to create a magical production. Thanks to the in-the-round staging, a performer might sing just a few feet from you. 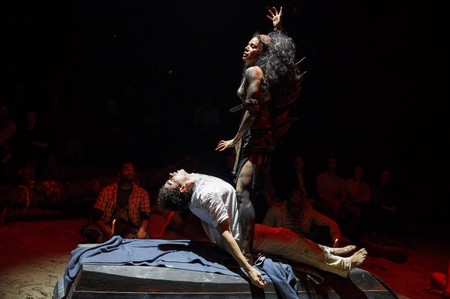 Arden, an actor-turned-director who also helmed the terrific Deaf West revival of Spring Awakening, has a number of theatrical tricks up his sleeve. Before the show even starts, he helps set the scene with food cooking on a grill and a live goat being led around the sandy stage by an actor. The production feels grounded in authentic Caribbean traditions. Arden and the creative team spent time in Haiti, and the trip obviously benefited the staging.

Ahrens and Flaherty are best known for the musical Ragtime. Their Caribbean-influenced songs for Once on This Island show their versatility. Kilgore brims with youthful excitement in her big song, Waiting for Life. Even more enjoyable are Pray and other jubilant ensemble numbers vibrantly choreographed by Camille A. Brown. 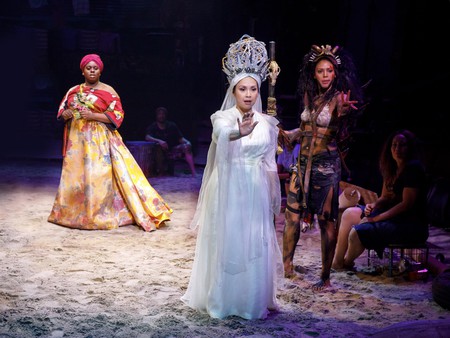 As well as Kilgore, leading man Powell is a talented young Broadway newcomer who can sing, dance, and act with gusto. In a supporting role as the goddess Erzulie, Lea Salonga does a beautiful rendition of The Human Heart. The original Miss Saigon star still has one of the loveliest voices on Broadway. While she seems to enjoy being a team player here, the show would have benefited from a few more solo moments for Salonga.

In his well-written director’s note, Arden mentions the recent hurricanes, storms, and earthquakes that have hit the U.S. and the Caribbean. For him, Once on This Island shows how “the good we do can echo and reverberate long after our lives are over.”

This uplifting musical celebrates storytelling, caregiving, and the power of love. It’s a journey to an exotic island where most of the residents are poor but lead lives filled with joy and passion. The actors in Arden’s outstanding revival share those inspiring qualities, too.