Clad head-to-toe in neon pink and proudly bearing a pineapple as their mascot, Becky Burt’s New Jersey surf school, Pink Pineapple Surf, is here for the girls. Forget what you’ve heard about the state, although there isn’t a palm tree in sight, New Jersey’s surf breaks are as good as any – especially in the coastal town of Manasquan, home to the East Coast’s girl’s only surf school.

A native New Jerseyan and surfer in her own right, Becky Burt spent some time working for Surfing the Nations, a Hawaii-based organization that gave her the opportunity to teach kids (including young girls in hijabs) how to surf in places such as Egypt and Israel. Years later, when she returned to the Jersey Shore, Burt realized that even in the states girls needed a space apart from the boys to learn how to surf, cheer each other on and just be themselves. 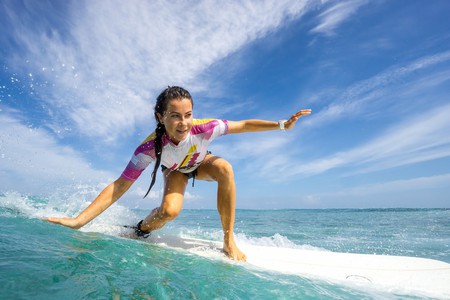 During the summer, the surf school offers lessons for girls ages three and up. The only requirements are your own suit, towel, water and snack. Don’t worry, the Pink Pineapple crew will supply the hot pink rash guards and giant inflatable unicorns for photos. They also offer surf camps that include beach-inspired crafts including collecting clam shells for handmade necklaces, art projects and other take-home trinkets that keep them feeling connected to the sea.

As sunny as it may seem, the road to Pink Pineapple Surf wasn’t so easy. Like Burt and many other young women just starting out, being surrounded by competitive boys and male surf instructors can be pretty intimidating. Says fellow East Coast surfer, Ceili Brennan, “For a while I wouldn’t go alone and I felt really uncomfortable in those gaggle of boys. I wasn’t confident in my skills and instincts as far as looking at the ocean and assessing which beaches were better on particular days, and I ended up just following them around, which was fine for learning but uncomfortable. If there were ever any other people in the water, they would always talk to the boys and not me.” 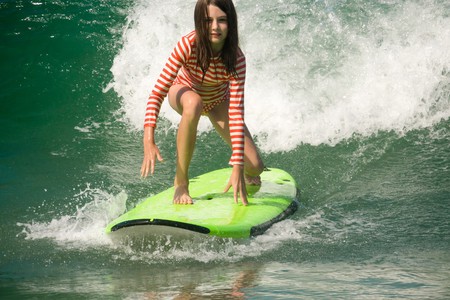 In an interview with a local newspaper, Burt described just how transformative learning how to surf can be for many young girls, “A lot of times these girls think they would they never actually surf or really do it, and then they stand up and ride the wave. They’re so happy. And then they’re hooked. It’s a lifestyle.”

And it worked. Since then, Burt and her neon pink tribe have been teaching girls how to catch a wave season after season – introducing them to a lifestyle they may not have ever discovered on their own. Who knows? Pink Pineapple Surf might be coaching the next Stephanie Gilmore or Bethany Hamilton. One thing is for sure, their infectious energy and righteous spirit is a unique brand of girl power that’s inspiring babes of all ages to take on the world one wave at a time.