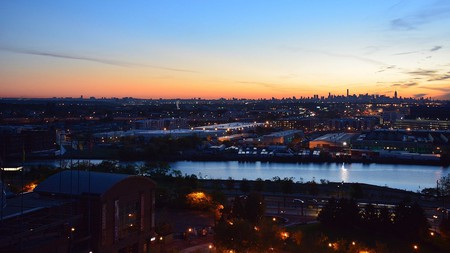 Sunrise in New York viewed from Newark | © A. Duarte / Flickr

New Jersey may be a small state. But the number of musicians who came out of the area are countless. Jersey natives Francis Hopkinson and James Lyon were among America’s first composers, releasing music in the mid-1700s. And the tradition continued and tapped different genres—from rock and roll to jazz to hip-hop. Find out more about these New Jersey musicians below.

When people think of New Jersey and music, Bruce Springsteen is usually the first person that comes to mind. Born and bred in South Jersey, Springsteen brought working-class issues into the spotlight with his honest lyrics and rock-and-roll sound. Born to Run (1975) and Born in the U.S.A. (1984) became his most successful albums for that reason. He has numerous awards including multiple Grammys and an Academy Award. He was inducted into the Rock and Roll Hall of Fame in 1999 and received the Presidential Medal of Freedom in 2016.

Hailing from Perth Amboy, NJ, Jon Bon Jovi went through various style and musical phases throughout his career. He’s best known for singles like “Livin’ on a Prayer” and “Wanted Dead or Alive.” His band, Bon Jovi, has sold more than 130 million albums worldwide—making them one of the world’s most successful bands. He won a Golden Globe and an American Music Award for “Blaze of Glory” in 1991. He was also inducted into the Songwriters Hall of Fame in 2009.

Known as Old Blue Eyes, Frank Sinatra, born in Hoboken, NJ, is recognized as being one of the best singers of the 20th century. While he was not classically trained in music and didn’t read music, the pop and jazz singer had a strong understanding of the craft. He was able to hold onto a crowd’s attention with his charisma and voice on more than 250 singles over the course of his career. Sinatra’s film career also earned the New Jersey musician three stars on the Hollywood Walk of Fame.

Nancy Sinatra seemed to inherit the same talents as her father, Frank Sinatra. Born in Jersey City, NJ, she made her debut on his show, The Frank Sinatra Timex Show: Welcome Home Elvis, where she sang the duet “You Make Me Feel So Young/Old.” She eventually released her big 1966 hit, “These Boots Are Made for Walkin’.” She also did the title song for the James Bond film You Only Live Twice, covered Cher’s “Bang Bang (My Baby Shot Me Down)” and released 13 more songs that made some headway on the Billboard charts.

Whitney Houston was one of the best-selling music artists of all time. Hailing from Newark, NJ, her seven albums and two movie soundtracks all charted and received various certifications from gold to diamond. Her 1987 LP, Whitney, made Houston the first woman whose album debuted at the top of the Billboard 200 chart. She had two Emmy Awards, six Grammy Awards, 30 Billboard Music Awards, and 22 American Music Awards. And she was inducted into the New Jersey Hall of Fame in 2013.

Although he may have grown up in New York City, Paul Simon was actually born in Newark, NJ. Simon found success with Simon & Garfunkel, especially with their singles “The Sound of Silence,” “Mrs. Robinson,” and “Bridge over Troubled Water.” After the duo broke up, he went on to release numerous solo albums and has won 12 Grammy Awards, one of which was a Lifetime Achievement Award. He was inducted into the Rock and Roll Hall of Fame two times. First, it was as part of Simon & Garfunkel in 1990. Then in 2001, he was inducted as a soloist.

Anyone who loved pop music in the 1960s would have listened to The Four Seasons. The group formed in Newark, NJ, with Frankie Valli as the group’s lead singer. With sweet harmonies and Valli’s effortless falsetto, the singing group released chart-topping tunes like “Sherry,” “Walk Like a Man,” and “Big Girls Don’t Cry.” The Four Seasons’ story has been immortalized in the Broadway hit Jersey Boys. They were also inducted into the Rock and Roll Hall of Fame in 1990.

Born and bred in New Jersey, Queen Latifah is one of hip-hop’s first female rappers. Her 1989 album, All Hail the Queen, boasted the hit single “Ladies First.” Aside from music, Latifah also flourished in the acting world. She has earned a Grammy Award for her song “U.N.I.T.Y.” She also won an Emmy Award, a Golden Globe Award, three Screen Actors Guild Awards, and two NAACP Image Awards.

When the Fugees released their 1996 album, The Score, no one would have expected how much success the record would bring to Lauryn Hill, Pras Michel, and Wyclef Jean. Not only did it gain them success as a hip-hop group but also as soloists in their own right. Following that album, the group eventually disbanded. Even though no one will see a Fugees reunion, fans can at least encapsulate The Score and remember how powerful the album was.

My Chemical Romance started their band in Newark, NJ. Although they are now one of the most recognized bands of today, the emo-rock band pushed themselves to be heard. However, thanks to sites like PureVolume and Myspace, the band was able to build a fan base that eventually grew and put them on the map. Even though their four albums did very well on the charts, 2006’s The Black Parade became the record that everyone remembers when it comes to their music.

The Misfits got together in Lodi, NJ, in 1977. The band made a splash by being part punk rock, part heavy metal, and all horror punk. They have released seven albums and have appeared in four movies. Despite multiple breakups and lineup changes, the New Jersey band has a very strong following and has been an influence on punk musicians who followed afterward.

Gloria Gaynor always had her sights set on having a singing career. And although it took her many years to get to that point, the Newark singer continued to persevere. And eventually, she broke through with the dawn of the disco era. Her biggest hit, “I Will Survive,” topped the Hot 100 chart. “Never Can Say Goodbye,” “Let Me Know (I Have a Right),” and “I Am What I Am” all also charted and added to her success.

The Sugarhill Gang is best known for the iconic 1979 hip-hop song “Rapper’s Delight.” Founded in Englewood, NJ, the group consisted of Michael “Wonder Mike” Wright, Henry “Big Bank Hank” Jackson, and Guy “Master Gee” O’Brien. Although “Rapper’s Delight” was their biggest hit, their song “Apache” did gain some recognition for its use in a Fresh Prince of Bel-Air episode.

Kool & the Gang began their musical journey in Jersey City, NJ, in 1964. At the beginning of their careers, their biggest songs included “Jungle Boogie” and “Hollywood Swinging.” But their 1984 album, Emergency, became their highest selling album with two million copies sold in the U.S. It boasted great singles like “Ladies’ Night,” “Celebration,” “Get Down on It,” “Joanna,” and “Cherish.” Kool & the Gang also picked up some accolades like two Grammy Awards and seven American Music Awards.

Born in East Orange, NJ, Dionne Warwick is best known for hit singles like “Don’t Make Me Over,” “Walk on By,” and “I Say a Little Prayer.” She has five Grammys under her belt. And between 1962 and 1998, she had 59 singles that charted on the Billboard Hot 100 chart. The feat made her the second most-charted female artist during the rock era, after Aretha Franklin.