From Maryland To Lithuania: The Global Cult Of Frank Zappa

Frank Zappa was a predominantly self-taught musician whose 30-year career embodied a wide variety of musical genres, with his idiosyncratic style encompassing elements of jazz, rock, synth, and symphonies. Zappa’s unconventional musical legacy has seen him develop a devout following throughout the world, from his home town of Baltimore, Maryland to Vilnius, the capital of Lithuania. 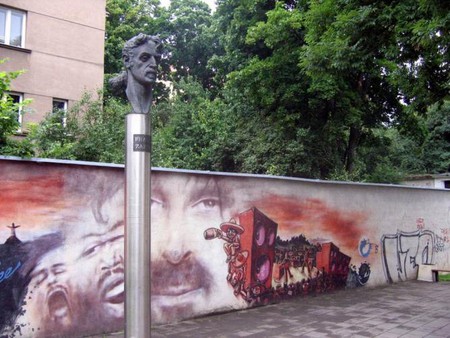 Zappa was an extremely productive and prolific artist, and gained widespread notoriety during his lifetime. His commercial success was not as large, but he did prove to be popular in Europe, particularly in the East. Zappa worked as an independent artist, producing his own records for the majority of his career, and plied his own path through the musical landscape. The production of Zappa’s work is vast, with almost more than 80 albums released with the band The Mothers of Invention and as a solo artist with his Zappa band.

A fan of flouting conventions, Zappa became well known for his iconoclastic view of established political and social processes, movements and structures. He was a strident critic of organised religion, mainstream education and an impassioned advocate for the freedom of speech, political participation, self-education and the abolition of censorship. He strongly encouraged his fans to register for voting on his album covers, and throughout some of his tours even had registration booths at his concerts. 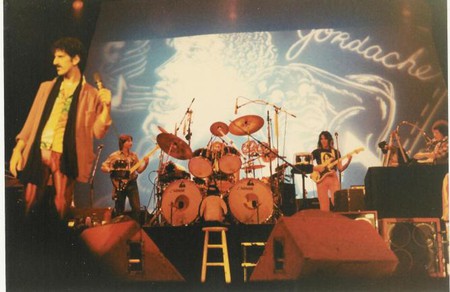 The eldest of four children, Frank Zappa was born in Baltimore, Maryland on December 21st, 1940. His mother was of Italian and French ancestry and his father was an immigrant from Partinico, Sicily. At age 10 Zappa moved with his family to California, before eventually settling in Lancaster — a small aerospace and farming town in the North of Los Angeles County. By playing in school bands and orchestras, the fledgling musician taught himself a variety of instruments, primarily focusing on guitar.

Zappa grew up influenced by avant-garde composers such as Halim El-Dabh, Anton Webern, Igor Stravinsky and Edgard Varèse, in addition to R&B, doo-wop groups and modern jazz. His own personal heterogeneous ethnic background along with the diverse cultural and social mix in and around greater Los Angeles proved fundamental in the formulation of Zappa as a practitioner of underground music. This diverse upbringing also contributed to his later lampooning of musical fads such as psychedelia, disco and rock opera — along with his openly critical attitude towards ‘mainstream’ political and social movements. 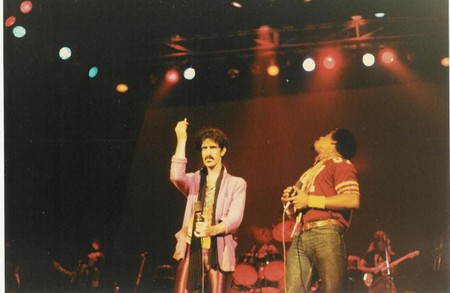 The earliest official recordings of the musician date from around the mid-1960s and include collaborations with his school friend, Don Van Vliet, also known as Captain Beefheart. In the year of 1965, he joined a band called The Soul Giants, quickly dominating its musical direction and rechristening it The Mothers of Invention. Their first release was the 1966 double album entitled Freak Out!, containing lyrics that praised non-conformity, disparaged authorities and had dada-ist elements, along with the occasional conventional love song. Three years later and Zappa had made the decision to work outside the band structure, instead choosing to focus on his solo career and effectively disbanding The Mothers of Invention in 1971.

The beginnings of his solo career in the late 1960s and early 1970s were characterised by a strong jazz influence with his albums containing little (if any) lyrical content such as Hot Rats. Towards the middle of the 70s, he veered towards a more rock-orientated approach with a fusing of jazz instrumentation and rock song structures. This more accessible sound garnered more mainstream appeal, particularly with well-marketed albums such as Apostrophe (‘) and Over-Nite Sensation. This run of success continued into the early 80s with the release of many albums with comedic rock songs as the main feature. Zappa continued to experiment relentlessly with virtually every style of music throughout the 80s and was productive in such a sense until his death from prostate cancer in 1993.

Frank Zappa had severed all corporate and contractual ties by the end of the 70s, instead choosing to produce his own albums. He would spend many hours in his home studio recording and manipulating tracks. As a musician, he was always at the forefront of emerging technologies and this featured within his music — from collage, multi-track and overdubbing in the 60s to digital recording, tape editing and sampling in the 80s. He was an obsessive self-archivist, recording almost all of his live performances and often using live recordings of new material without needing to return to the studio. His reputation as a talent spotter also proved to be incredible as his shifting lineup of musicians included figures such as Terry Bozzio, Chad Wackerman, Lowell George and Jean-Luc Ponty, amongst others. 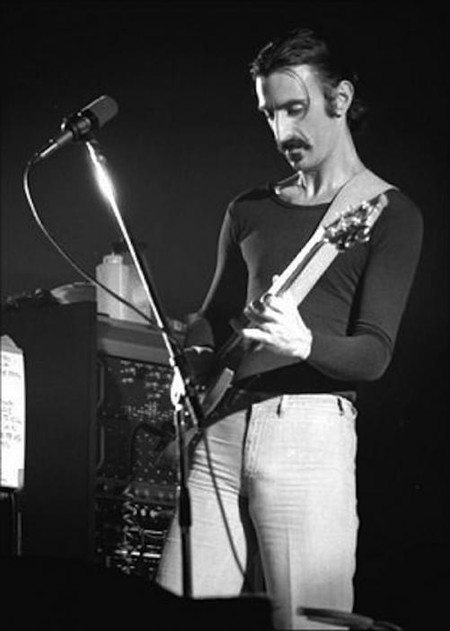 Frank Zappa is quite often regarded as one of the most misunderstood men in the history of popular music. Having been a considerable part of the Rock ‘n’ Roll scene during the 60s and 70s, Zappa’s image has often been assimilated with the image and values that accompany that notorious lifestyle. Zappa however, did not take drugs or drink alcohol like many people assume — his only addictions were tobacco and caffeine, and he heavily relied upon cigarettes and coffee to sustain his long writing sessions. Often criticised by those around him as a workaholic, he took his music very seriously, working day and night without sleep, getting required relaxation through his work. Many people close to Zappa also remarked that there was a high chance of him being a manic-depressant if he was ever to be analysed. Radical mood swings were at the core of Zappa’s personality — and no doubt the root of his creativity as well.

After a short promotional tour following the release of Freak Out!, Zappa met Adelaide Gail Sloatman and fell in love ‘within a couple of minutes’. Frank Zappa married Sloatman in 1967 and they had four children together until Zappa’s death – Moon Zappa (Moon Unit Zappa); Dweezil Zappa (Ian Donald Calvin Euclid Zappa); Ahmet Zappa (Ahmet Emuukha Rodan Zappa) and Diva Zappa (Diva Thin Muffin Pigeen Zappa). Despite his familial life, biographer Barry Miles says in his biography entitled Frank Zappa, that the musician still retained a fondness for groupies — whom he regarded as avatars of sexual freedom and as providers of a valuable service to touring musicians. Miles also states that Zappa was a ‘confirmed misanthrope’ who regarded normal social relations as a ‘waste of time’. He took himself seriously and was incredibly disdainful of audiences, feeling that they never fully comprehended his music and held a particular hatred for the media. 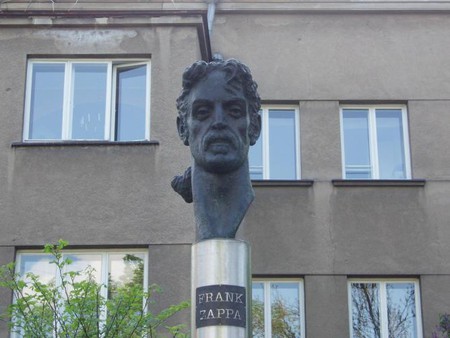 His personal life aside, the accolades have continued to pour in since his death. In 1995, a bust of the musician by sculptor Konstantinas Bogdanas was installed in the city of Vilnius. Lithuania proved an odd place for a tribute to Zappa; he wasn’t Lithuanian, nor had he ever visited the Eastern European country. However, the avant-garde inhabitants of the country sincerely adored his music after the Lithuanian independence movement. The opportunity for the showcasing of the Zappa statue became ‘a trial for the new system and the newly established democracy’, in the words of long-time president of a Zappa fan club, Saulius Paukstys. Soon after its installation, the Zappa bust became Vilnius’ second-most popular tourist attraction.

In 2008, Paukstys journeyed to Baltimore, USA to offer a replica of the Lithuanian statute. Paukstys and the rest of the fan club and comrades had already arranged for the casting of a replica and were simply awaiting the go ahead from Baltimore authorities before it was shipped across the ocean. For a fan gesture, the cost was quite considerable; the creation and shipping of the bust was estimated at $50,000, but the city of Baltimore will be responsible for installation and maintenance. This dual sculpture aims to perpetuate the memory of Frank Zappa as one of the greatest artist in the 20th century, set in the cities that have been touched by his music. Other accolades dedicated to Zappa’s memory in Baltimore include the mayor of the city, Sheila Dixon, establishing August 9th as the city’s official ‘Frank Zappa Day’ citing the Zappa’s musical accomplishments as well as his defence of the First Amendment to the United States Constitution. 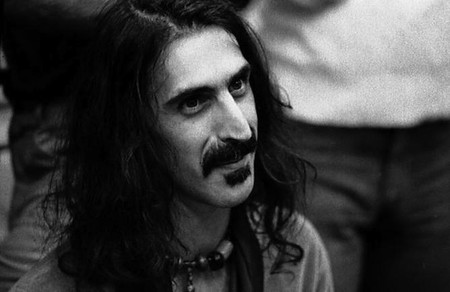 Ironically since his death, Frank Zappa has received worldwide recognition and honour for his talent, innovation and personal beliefs. Posthumously, he has been inducted into the Rock and Roll Hall of Fame in the year of 1995, and achieved the Grammy Lifetime Achievement Award in 1997. In 2004, Rolling Stone magazine ranked him 71st on its list of the ‘100 Greatest Artists of All Time’ and in 2011 was ranked at number 22 on the list of the ‘100 Greatest Guitarists of All Time’ by the same magazine.

Frank Zappa’s diverse work throughout his career as a musician, designer, producer, entrepreneur and activist all combine to form an image of Zappa as a confirmed iconoclast. The legacy of Frank Zappa will be remembered much like the construction of his songs — many diverse and disparate elements which all unite together to form one unique and irreplaceable individual.