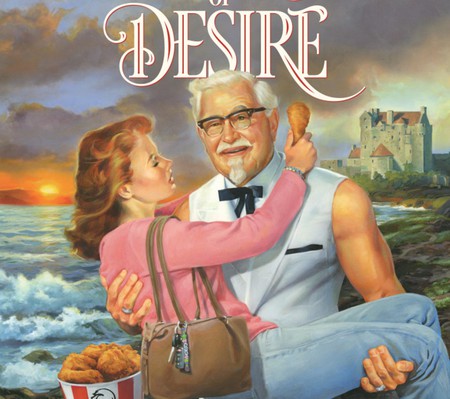 From the cover | Courtesy of KFC

We should be used to it by now, in these dark times… just when you think things are about to get better, that the tide of nastiness and mendacity has turned back, the worst actually happens: an international fast food chain expands to bathroom literature.

“For mothers everywhere,
I dedicate this to you—a brief escape from
motherhood into the arms of your fantasy Colonel.
Whoever he may be.”

So begins Tender Wings of Desire, a 96-page novella released by Kentucky Fried Chicken this week and made available for free as an Amazon e-book. The story follows one Lady Madeline Parker, a somewhat-Victorian young aristocrat who runs away from home and the promise of a loveless marriage. She ends up becoming a waitress at a tavern in a small seaside town, where a regular catches her heart, a sailor by the name of Harland who—spoiler alert!—turns out to be none other than Colonel Sanders.

Though ‘why?’ may be, by now, a question too terrifying to pose (the sole possible answer being, of course, the kind of ‘why not?’ an overexcited babyman-in-a-suit would gurgle), the ‘how?’ of it all is equally as arresting. As parodies go, this one is rather light, to say the least, and more concerned with authenticity than it is with comedy. Pity the agency copywriters who had to spend their nights on it:

“He was tall, dressed like a sailor with a striped linen shirt and woolen peacoat crusted with sea salt. His hair was light and fair, framing his head in airy curls, and the eyes that stared back at her were almost the exact color of the sea, perhaps darker, but not by much, and they hid behind glasses with dark frames.”

And it goes on like this for close to 100 pages. There aren’t, of course, any properly raunchy scenes (although we are told, in a wink-worthy aside, that “to call their [Madeline and Harland’s] affair passionate was an overstatement”), so its appeal to mothers bored and boring appears rather limited. Oh but who knows? Perhaps the prospect of leaving your hysterical children and pregnant-bellied husband for the life diabetic, and a sailor who smells of chicken, is a godsend to some. Did somebody say fat chance?

Mother’s Day, which this year falls on May 14 in the US, is usually a best-seller for KFC with an average 40% boost in sales. Tender Wings of Desire is part of an ad campaign designed to ensure that remains so, and allow the brand to self-consciously weird its way to millennials’ hearts. At least that must be how the concept was explained to whoever’s in charge.

Speaking of which—George Felix, director of advertising at KFC US, had this to say in a statement: “The only thing better than being swept away by the deliciousness of our Extra Crispy Chicken is being swept away by Harland Sanders himself. So this Mother’s Day, the bucket of chicken I get for my wife will come with a side of steamy romance novella.”

So don’t forget, everyone, that this is all commercial comedy. And if you’re still unsure of how you should let the mothers in your life know what little you think of them, you could always offer an actual romance novel. That ought to bring the point home.