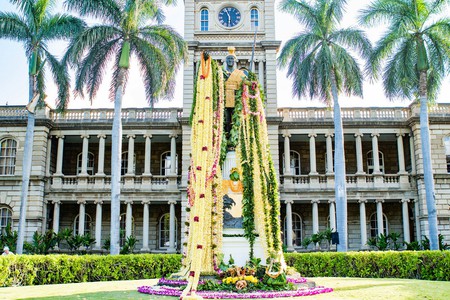 Hawaii is a place with an intricate history, and many customs unknown to outsiders. Most Hawaiian traditions are a fusion of different practices taken from the various cultures who call the islands home. From Polynesia to the edges of the Pacific and Asia, here is a look at a few of Hawaii’s unique, modern-day traditions.

A kiss on the cheek

Greetings in Hawaii start with a kiss on the cheek, even for first-time introductions. It’s a customary practice, one that children infamously regret doing, especially at a party of 20 or more guests that require a greeting with a cheek kiss. The same greeting also applies at the end of an event to say goodbye and it’s considered inappropriate or impolite to leave a party or dinner without a kiss to say a hui hou — until we meet again.

Aloha wear is the utmost representation of Hawaii — a clothing style with traditional Hawaiian floral prints or loose-hanging neutrals in the form of shirts, mu’umu’u dresses, and even pants for all genders. Walk the streets of downtown Honolulu and you will see aloha attire everywhere. Men’s aloha shirts are often paired with dress pants and shoes, which serve as an acceptable business outfit, or even wedding-wear. Today, men in Hawaii choose modern cuts and typically stick to earth tones like gray, brown, green, and blue. Currently trending is the nature-inspired geometric designs of Manaloa. 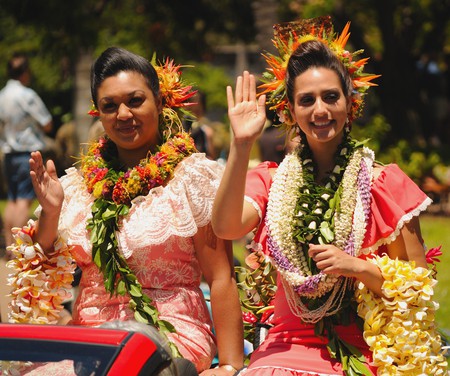 Every June 11th, the first monarch of the Kingdom of Hawaii, King Kamehameha the Great, is celebrated. Each year, a Ho‘olaule‘a (festival), a carnival, a lei draping ceremony, and a floral parade are held in his honor, and the entire state has the day off.

Lūʻau feasts aren’t just a tourist attraction. One of the biggest and most discussed forms is a baby lūʻau — celebrating a child’s first birthday. This celebratory tradition began after foreign disease permeated across the islands, resulting in the drastic decline of the Hawaiian population. During this time, if a baby beat the disease and made it to their first birthday, it was a celebratory occasion. This custom is still cherished today — parents and grandparents begin party-planning months in advance and invite everyone from neighbors to distant relatives. Guest lists can reach upwards of 100 people, and there is always a table of pupus (appetizers), a buffet of local food, Hawaiian music, and games. 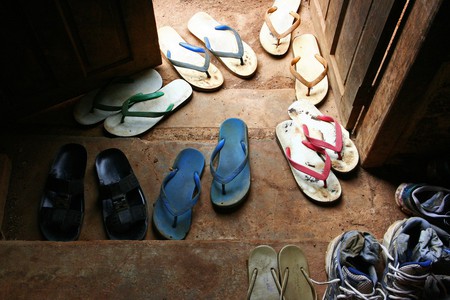 No shoes in the house

Wearing shoes in a home in Hawaii is rarely acceptable. Shoes and slippers are always left on the doorstep to avoid tracking any filth into the house. This deeply ingrained custom is borrowed from Japanese culture and resonates well with Hawaii’s warm climate. Perhaps the only drawback lies in searching for slippers or shoes among the dozens of pairs left at the doorstep — particularly at a party or event.

‘Ohana (family) is extremely important in Hawaii. Locals consider even those who are not blood relatives but close friends to be part of their ‘ohana. Obama famously used the local term, calabash cousin in a 2009 speech, expressing this sentiment. This particular expression refers to someone you grew up with, who is so close that you consider them part of your family. In addition, “aunty” and “uncle” are used in place of “sir” or “ma’am” to express a feeling of inclusiveness and kinship to elders, although more often than not, there is no blood relation. 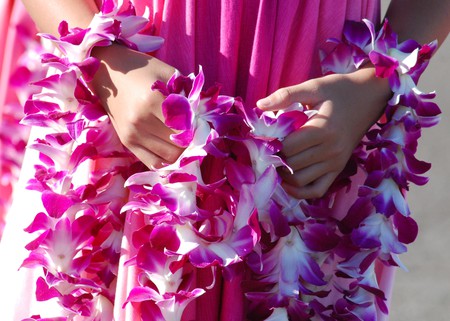 HICKAM AIR FORCE BASE, Hawaii - Children from the Halau Hula Olana under the direction of Kumu Hula Olana dance traditional hula dances for the U.S. Air Force Thunderbirds arrival Sept. 16 here. They met the pilots with leis to put around their necks to welcome them to Hawaii. The lei in the Hawaiian culture symbolizes many things, to include welcome and affection for the person receiving it. In 1975, Howard and Olana A`i established Halau Hula Olana, the School of Living Hula, where hundreds of children ages 6-13 have been instructed by Olana and her family. The halau frequently performs in Hawai`i, and has danced in Europe, Asia, the South Pacific, and across the United States. (U.S Air Force photo/Staff Sgt. Mike Meares)

The giving of a lei is the most popularized Hawaiian tradition. Gifting a lei is appropriate on many occasions including graduations, birthdays, or retirements. Lei are hung up at home to dry, or kept in the refrigerator to smell over the next few days. Be careful, though, never give a pregnant woman a closed lei as it is believed to represent a baby choked by the umbilical cord.

With scenic or traditional venues paired with local cuisine, a Hawaiian wedding is unlike any other. At a typical wedding reception, a buffet of Hawaiian food will include kālua pork, lomi salmon, rice, poke and poi. Brides often choose to perform a hula, with the groom sitting front and center. Depending on a couple’s ethnic background or heritage, a Chinese lion dance, Hawaiian music, or the money dance may make an appearance. But, typical American wedding traditions — like cutting the cake and the father-daughter dance — are still practiced. 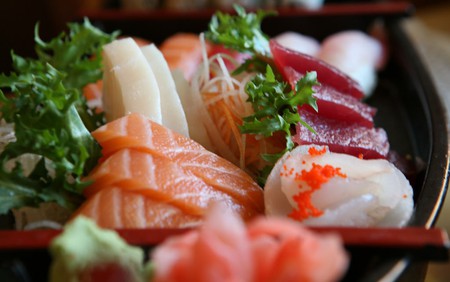 Locals love their raw fish, especially ahi (tuna). Originally a tradition from Japan, eating sashimi on New Year’s Eve is a Hawaiian must-do. With a limited supply of fresh premium-grade fish to go around, prices often skyrocket, and fish markets sell out each year during this time.

May Day is Lei Day in Hawaii. On May 1st, locals on all of the Hawaiian Islands converge to celebrate all things lei. Lei Day performances are organized in schools, and those on O’ahu head to Queen Kapiolani Park for a day of hula, live music, local food, lei-making demonstrations, and a lei contest exhibit. Each year, one lei is deemed the ‘best in show’ and awarded the Mayor’s Grand Prize.