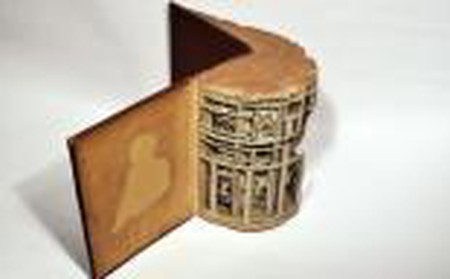 Since the rise of the e-reader, books have been on the decline. But not all is lost; two artists are re-appropriating books to create some rather striking works of art. Employing a variety of techniques and mediums from sculpture to origami, Texas-based artist Isaac Salazar and Georgia-based Brian Dettmer are two artists to watch. 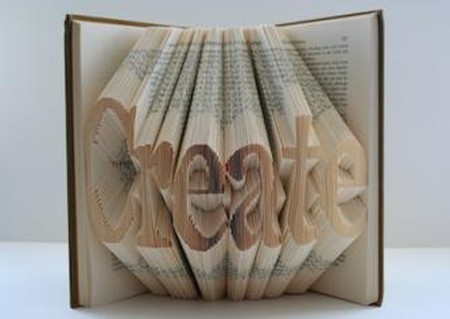 A Texas-based accountant with no formal art training, Isaac Salazar was looking for a hobby when he stumbled upon a book of origami. He began with the basics, and upon discovering a natural propensity for the craft, he moved on to increasingly complex typefaces. To create the letters, Salazar uses basic arithmetic and an exacto knife to sculpt the folds. The time it takes to complete each work of art can vary anything from one day to several weeks depending on the intricacy of the typeface. 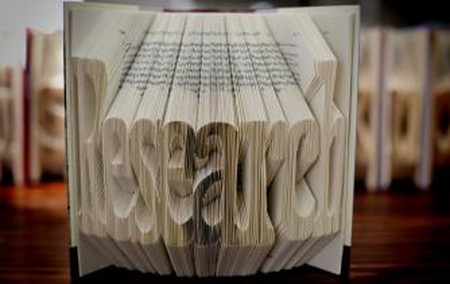 Often gaining inspiration from the subject matter of the book that he is using to create the piece, Salazar stated that he felt this could be used as a way to inspire people as well as being art; an example was the creation of a recycle symbol on Robert Lamb’s A World without Trees. Salazar is a strong advocate of recycling, and thus obtains the majority of his books from the local library’s discard piles. Using books as a medium is something that is quite important to Salazar, who recognises books to be a dying breed. By making use of the great number of unwanted books in circulation he is essentially reviving them, creating something beautiful out of something unwanted. It is this green aspect to his work that spurs him on to create his artwork; he has mentioned that the knowledge that his work is in some small way helping to protect the environment is very gratifying.

Originally from Chicago, Brian Dettmer currently resides in Atlanta, Georgia. Known for his detailed and innovative sculptures using both books and other forms of antiquated media such as cassette tapes, his work has been exhibited internationally. Arguably a form of sculpture, he begins to create the dissected books by sealing the edges to create a singular form, and slowly carves out his creations using surgical instruments such as scalpels and tweezers. With these instruments he reveals certain elements whilst keeping others hidden with the end result being a 3D multi-layered art object. 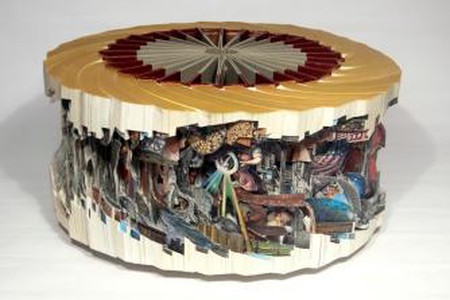 Using out-dated dictionaries, encyclopaedias and history text books that would otherwise remain obsolete and unread, Dettmer is recycling in a manner that not only benefits the environment but also creates beautiful, sculptural pieces that can be appreciated by a wide audience. The finished items form a new relationship between the books’ internal elements yet leaving them in their original place as they were in their first conception. This creates a sort of behind-the-scenes look at the book, and also illustrates the intense labour that it takes Dettmer to slowly and intricately carve the books into their final stage. This is a physical interpretation of the words and images that are on display within each book, recontextualising a once-static object and creating an alternative function for the obsolete information held within the books. 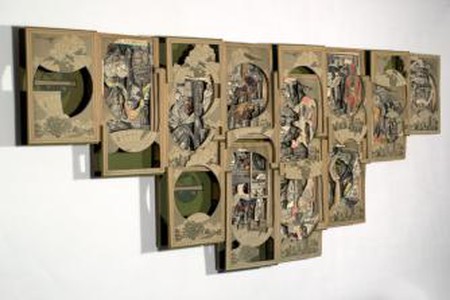 Brian Dettmer, Organised Knowledge in Story and Picture, 2010 | Image courtesy of the artist

Interestingly enough, Dettmer had primarily focused on painting whilst studying at college, and it was only when he began to work in a sign shop that he began to explore the relationship between text, language, code and images. Some of his work included paintings based on Braille, Morse code and American Sign Language, as well as collages using newspaper fragments and book pages. Here he would paste the pieces repeatedly to the canvas and tear off pieces as he went, leaving behind an intricate layer of fragments. It would seem that it was this that would ultimately lead to his current and entirely more sculptural practice, for which he is now renowned. The exploration of and collaboration with existing materials, and indeed their past creators, is an important part of Dettmer’s work. As when reading a book, he states that he doesn’t know what is going to come next or what image or word will be on the next page, and thus he never knows exactly how he piece will turn out.

Although there are similarities between Dettmer’s and Salazar’s work, the nature of their art is entirely different – as is their approach to the medium. Whilst both use books as a medium, and gain inspiration from the pages upon which they work, Salazar’s work is based more on origami and is literally linked to the content of the book, whilst Dettmer’s is more sculptural. However it is with equal skill that they execute their final products. 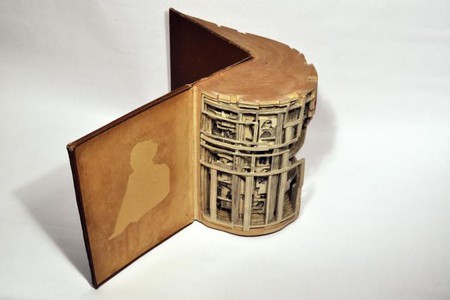