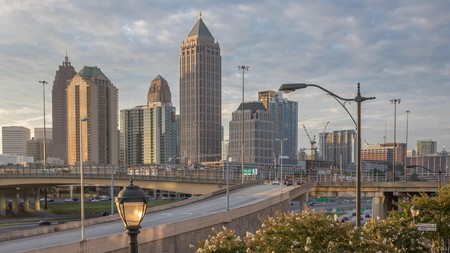 Summertime in Atlanta is one of the best times to visit the city. From music festivals with food trucks to strolling the Atlanta Beltline, there’s something for everyone. With so many fun things on offer, figuring out what to do can be a little overwhelming. To get you started here are 13 ways the locals spend their summer in Atlanta.

A former railway corridor turned into an urban trailway, the Atlanta Beltline connects 45 city neighborhoods. The Eastside Trail stretches from Piedmont Park to Inman Park and historic Old Fourth Ward. Beltline strollers take advantage of the graffiti-filled walls, premiere dining and shopping that have opened along the trail.

Beltline with the whole family. 🐶🐶

The warm summer months are a great time to get out and enjoy some music. From hip-hop to indie and jazz, Atlanta is home to some of the best music festivals. Held at at Centennial Olympic Park in Downtown, locals hit up the Shaky Knees Music Festival which features more than 30 bands, food trucks and local artisans. Atlanta’s largest music festival is Music Midtown held at Piedmont Park. The two-day extravaganza has featured some of the largest names in music.

Held in the evening on the second Friday of every month, Castleberry Hill Art Stroll is a favorite summer pastime of the locals. Held in historic Castleberry Hill, known for its art scene, the stroll is completely free and self-guided.

Bar, Pub Grub
Facebook
Email
Twitter
Pinterest
Copy link
Share
Map View
Opened in 2010 by Grant Henry, Sister Louisa’s Church of the Living Room & Ping Pong Emporium a.k.a Church (It’s a bar) has been been a local favorite for years. Located in historic Old Fourth Ward, the “church-themed bar” boasts religious art that covers its walls, a confessional that serves as a photo booth and complimentary choir robes. Locals love the bar in the summer because of its small patio out back, its daily-made sangria and its monthly dance party, “Sunday Service with Atlanta DJ Vicki Powell.”
Open In Google Maps
466 Edgewood Avenue Southeast, Sweet Auburn, Atlanta, Georgia, 30312, USA
+14045228275
Visit Website
Give us feedback

Located adjacent to Piedmont Park in Midtown Atlanta, the Atlanta Botanical Gardens attracts locals all summer. The 30-acre botanical garden boasts a Canopy Walk, in which visitors can view one of the city’s last remaining urban forests. Alongside the forest visitors can see the Orchid House, tropical plants and roses. In addition to the sprawling gardens, the botanical garden hosts weekly events and socials.

Monochromatic palette in the Parterre? Question your nature during The Curious Garden. #curious —> atlantabg.org/curious

A 290-acre theme park located west of Atlanta, Six Flags Over Georgia is not just for the kids. The theme park features many roller-coasters, including Goliath, Mind Bender and Acrophobia. Alongside its sought-after thrill rides, Six Flags of Georgia features many other rides and attractions.

Tubing down the Chattahoochee river , also known as Shooting the Hooch, is a popular summertime activity in Atlanta. You can rent your tube but many locals have one on hand because they tube all summer. There are four drop-in spots along the Chattahoochee river just a few miles from the city. Tubers bring their own music, food and beer to enjoy while they sail down the the river.

Great last weekend with my man the infamous U.K. @david_latham. We're gonna miss ya in the ATL my dude. You've been an amazing friend this year and I don't doubt we have some adventures abroad. #shootthehooch

Starting in April of every year, the patio opens at 8 Arm, a hip cafe across from Ponce City Market. The covered patio features a bar that was created from an old shipping container and features festive tiki decor. In the summer, 8 Arm hosts weekly dance parties where guests enjoy rosé and guest DJs.

Getting its name from the Silver Comet passenger train that traversed the same route from 1947 to 1969, the Silver Comet Trail is now a trail for hikers and bikers. Over 61 miles, the trail starts in Smyrna and runs west connecting to the Alabama’s Chief Ladiga Trail at the Georgia-Alabama border.

Dinner and a movie takes on a new meaning during the summer months in Atlanta. An Atlanta staple, Starlight Drive In Theater has been open since 1949. Double-features play seven days a week on their digital projection screen.