A Guide to the LGBT Scene in Miami 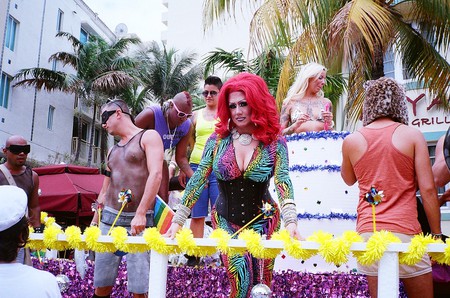 Miami is beautiful, culturally diverse, and open-minded, making it a huge hub for the LGBT community. The city offers a judgement-free zone and an air of acceptance, beaming color, music, and love. Miami is also home to several great gay clubs and bars, a fun, lively nightlife scene, pool parties, brunches, and festivals that celebrate love in all its forms.

As you walk along the beach, you’ll notice rainbow flags fluttering in the wind near the 12th Street Beach and realize you’ve hit paradise. This section of Miami Beach’s long stretch of beautiful Atlantic waters and soft white sand dedicates itself to the LGBT community, where visitors can come and lounge without fear of being judged. Break out your best swimsuit, bring out some cold beer (and don’t forget the solo cups, no glass allowed on the beach), and get ready to get your glow on, baby. 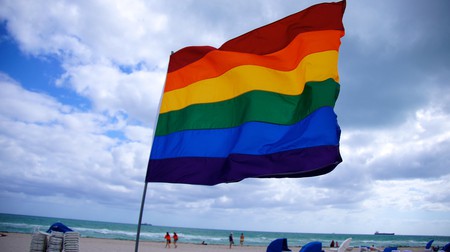 Looking to get rid of your tan lines? Haulover Beach, located north of Bal Harbour, has a clothing-optional area. It also boasts a gay section to the north of the nude section. If you’ve been working on your summer bod and you want to show it off, this is the place to go. Bring along some cold brewskis and a whole lot of tanning oil; you want to make sure certain sensitive areas don’t get burned. Also, be prepared to flirt.

Looking for a good time and one of the best whiskey sours of your life? Head over to Twist, where there is no cover charge to come in and dance and talk to cuties. Not only is this club poppin’ as the night goes on, but you can rest assured that you’ll be able to drink quite a bit for much cheaper than any other Miami Beach club. Drinks are about $8–10, whereas alcoholic beverages from other clubs boast prices of about $15–20 per drink. Yikes! Get ready for some great music and company.

Azucar is a gay Latin nightclub that has its weekly “Drag Wars” competition on Thursdays and Fridays, where Miami’s best drag queens bring their game and put on one hell of a show for the chance to win $200. The best part? You’re welcome to be part of the competition if you think you have what it takes! You can also visit on Saturdays for a free shot and some sexy dancers. You’ll also want to order a margarita, as the bartenders here make an excellent one!

Every Wednesday night, Gramps, a really cool spot in Wynwood where you can have a drink and listen to some live music, boasts Bingo with Miss Toto, one of Miami’s hottest drag queens. Winners get to take home some cool prizes, such as gift certificates to Shinola, Sweat Records, and Panther Coffee, and drinks/bar tabs also come as prizes. Just come over and hang out, grab a bingo board, and get playing as you never know what you can win. Even if you don’t win, Miss Toto will keep you laughing and having a grand old time.

BINGO AT @GRAMPSWYNWOOD TONIGHT FROM 9-12!! come give me a proper send off for @bushwig south this weekend in NEW ORLEANS 🎺🎭🎷 there will be prizes, gift cards, my personal training raffle, miss toto merch, and pizza by @pizzatropical 🍕 what else could you want?! come play! ✨ #IMINLOVEWITHMISSTOTO 💕💪🏾✨

The first and only gay bar and restaurant on Ocean Drive, Palace is a great place to come by for brunch on Sunday, where you can watch the restaurant’s fabulous drag show while munching on a chicken and avocado burger (yum). The brunch menu boasts grilled skirt steak, fruit pancakes with honey drizzle, and an assortment of pastries in a basket, among other delicious dishes. Grab your friends and head over for a good time. Remember, the bar and restaurant is open to everyone. 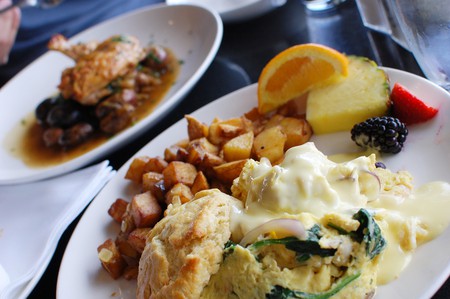 Join Us For Gay Brunch | Jen/Flickr

If you’re looking for some Miami spice, you’ll need to head to Señor Frog’s. Come hang out with some of Miami’s best drag queens from 12–4 pm, where the food and show will only cost you $19.95. Round up a group of friends for cocktails, tacos, coconut shrimp, burgers, and sandwiches. There will be music, laughing, dancing, and all kinds of thrills. It’s pretty much the best way to start your week.

Miami Beach Gay Pride is one hell of a party and the city’s most infamous gay pride event. Thousands of people gather for this three-day festival full of events, music, parties, including those on the beach, day drinking, and lots of colorful floats; you’ll see drag queens, dancers, and all kinds of talent. According to the parade’s official site, “The mission of Miami Beach Gay Pride is to bring together members of the lesbian, gay, bisexual, and transgender community, their friends, allies, and supporters in celebration of the unique spirit and culture of the LGBTQ community.”

Sizzle Miami is America’s top urban gay event, and it is a five-day celebration with both daytime and nighttime festivities. While it mostly caters to urban males, anyone can join in on the fun as long as they are 21 and over. Events include yacht parties, nightclub happenings, and pool parties!

The World OutGames is a 10-day event that seeks to challenge not only your body but also your heart and soul; it combines sports, culture, and human rights into its activities. The sporting event has one main rule: to allow players to participate “without discrimination on the basis of sexual orientation, gender identity, gender expression, sex, physical or mental ability, marital status, ethnicity, color, nationality, religion or age.” It’s really a beautiful event, especially for those who love to play sports, and also involves events in art, film, and dance, among many others.

Register today for World OutGames Miami and save! Today is the last day of our reduced registration fee, the fee raises to $250 beginning February 1. Don’t miss out, do it now, visit outgames.org.

This massive event helps raise money for Care Resource of South Florida, an organization dedicated to helping those affected by HIV/AIDS. It is the oldest and largest dance fundraiser for HIV/AIDS, according to the official Facebook page. The event includes club events, DJs spinning the hottest music in the globe, and open-air dance parties that go on for hours and hours. You won’t want to miss this!