Julia Morgan was one of the most influential and innovative female architects and left a lasting, positive mark on the history of the practice. In 1904, she became to first woman licensed to practice architecture in the state of California. With over 700 buildings designed throughout her career, Morgan was a strong proponent of the women’s rights movement. Here are five of the most beautiful pools that Julia Morgan designed in California. 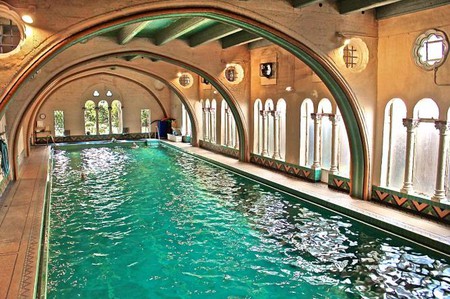 The historic Berkeley City Club, located on the UC Berkeley campus, was organized and funded entirely by female citizens of Berkeley. In 1927, the women of Berkeley believed that they needed a club that would contribute to their social, civic, and cultural progress. By 1929, Julia Morgan was designing such a building, and it was a great hit, having 4,000 members at its opening. Morgan’s architectural style was a combination of Moorish and Gothic elements that lead to the style of ‘California design.’ The swimming pool is on the eastern side of the building and is perhaps the most beautiful aspect of the club. Large windows face towards the East garden, flooding the room with natural light that create the illusion of an outdoors atmosphere, even though this is an indoor pool. The walls are lined in cloistered arches, and the colorful tile floors have beautiful decorative designs, making this pool one of the most beautiful in Berkeley, and perhaps ever designed. 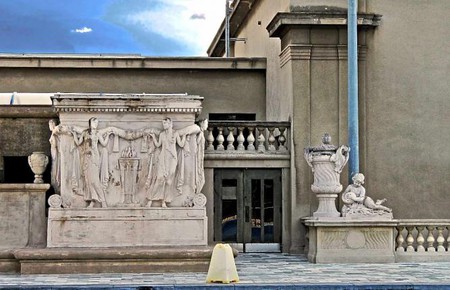 Another building designed by Julia Morgan on the UC Berkeley campus is the Hearst Memorial Gymnasium For Women, an additional area that was intended just for women’s use. The entire gymnasium building is designed in classical architectural form, and features colonnades, arcades, and classical statuary and motifs. The pool is once again possibly the most beautiful part of the entire building; it channels the ancient bathhouses of the Romans, with its ornate marble tile decks, colonnaded walls, and ornate statuary. The bottom of the pool is also lined in marble, giving the swimmers an unforgettable experience. When looking to the side for a breath, swimmers will either see the iconic Campanile, or some of the many classical goddesses or ‘putti’ sculptures.

Located farther south in California is the Annenberg Community Beach House at Santa Monica State Beach. William Randolph Hearst owned the 5-acre oceanfront site, and in the 1920s he asked Julia Morgan to design a beachfront mansion for his mistress, actress Marion Davies. The Davies estate featured a mansion with 118 rooms, 55 bathrooms, three guesthouses, two pools, tennis courts and even dog kennels. This Georgian-style mansion was by far the grandest in the area, which was known as ‘Gold Coast’ back then, and reportedly cost $7 million. Over the decades this property went from private to public ownership, getting almost completely destroyed in the 1950s and subsequent earthquakes. However, city officials came up with an $18 million restoration plan, and the Annenberg Community Beach House reopened in 2009. The modern-day has slight variations from the original design, but restorers did their best in keeping with the overall form and function of this historic mansion. 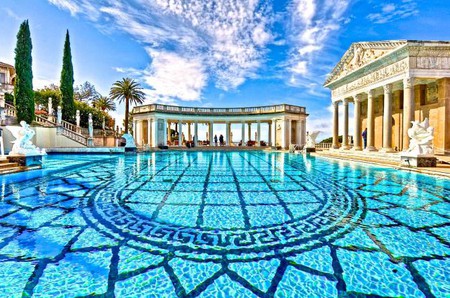 The history of the great Hearst Castle in central California began in 1865, when George Hearst bought 40,000 acres of ranchland. By the time his son, William Randolph Hearst, one of the most powerful media-men in the 20th century, inherited the land in 1919, it had grown to over 250,000 acres. Hearst dreamed of transforming the land into a country retreat called La Cuesta Encantada—or the ‘Enchanted Hill’ in Spanish. Construction on the castle went on from the 1920s-1940s, until its completion in 1947. The finished product has 165 rooms and 127 acres of gardens, pools and terraces that were all expertly designed by Julia Morgan to Hearst’s exact specifications. One of the most iconic parts of this great property is the main pool, Neptune Pool, which was rebuilt three times until it suited Hearst’s taste. This is the largest pool at the estate and holds 345,000 gallons of water. Hearst even imported the centerpiece, a façade of an ancient Roman temple, from Italy to California. 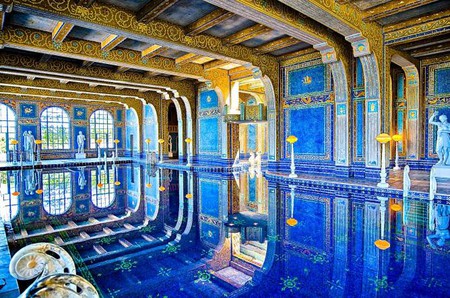 The second major pool at Hearst Castle is Roman Pool, which is styled after ancient Roman bath houses like the Baths of Caracalla that were built in Rome from 211-217 CE. Similar mosaics found in the Mausoleum of Galla Placidia in Ravenna, Italy from the 5th century CE inspired the blue and gold mosaic tile patterns. The designs in these tiles are copies of traditional marine monster themes that are also found in ancient Roman bathhouses. The glass tiles are called ‘smalti,’ and consist mainly of the colors blue and orange, with the occasional clear tile that is gold infused to create a brilliant shimmering effect. In addition to the tile work, there are also eight copies of statues of Roman heroes, gods, and goddesses that surround the pool, which was a traditional scene in Roman bathhouses. Sculptor Carlo Freter carved the statues in 1930 in Pietrasanta, Italy and worked directly with statues in the Vatican museum to copy them faithfully. With such an interest in the intricate details and quality of craftsmanship, it is no wonder that the Hearst Castle pools are some of the most beautiful and admired pools in all the world.