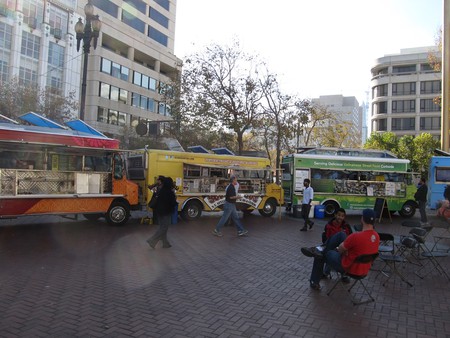 San Francisco is brimming with mobile dining options, offering everything from reinterpreted Taiwanese street-food and Filipino-Mexican fusion to vegan sorbets and crème brûlée. Whilst many of the Bay’s food trucks congregate for mobile markets, most tour neighborhoods on a weekly or even daily basis, listing locations on their websites. Read on to discover the top 10 San Francisco food trucks, offering opportunities to eat well when restricted by time. 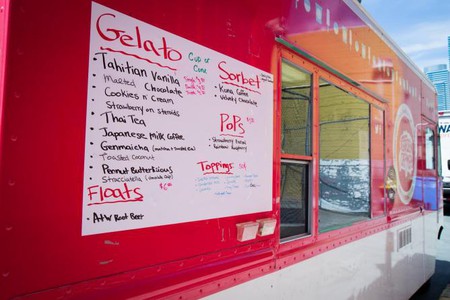 The team behind the Bacon Bacon food truck have revolutionized the approach to bacon. Offering bacon prepared in a surprising variety of forms, this food truck promises everything from the classic bacon burger to the bacon-lined grilled cheese. For dessert, Bacon Bacon produces decadent sticks of chocolate covered with nut encrusted bacon and accompanied by bags of bacon caramel corn. For a romantic treat for true devotees to the salty snack, why not buy a bacon bouquet for a taste of the eccentric?

Brass Knuckles packs a punch when it comes to flavor, offering unique combinations and textures via original recipes. From seasonally adapted aqua frescas to the headlining dishes that earned the truck its fame, this particular food vendor is focused on delivering a delicious savory experience. Titling their creations with reference to pop culture, Brass Knuckles’ signature range features the Notorious P.I.G. – a rosemary waffle stuffed with house roasted pork, ham, Swiss cheese and a bacon crisp.

Boasting an excellent local reputation, the Chairman Truck has acquired a considerable fan-base due to its interpretation of Asian street food. The Chairman himself is Hiroo Nagahara, a former executive chef at Bar Charlie in Las Vegas and no stranger to producing high-quality cuisine. Bao – Taiwanese buns – underpin the spicy, savory and often pleasingly rich creations offered from the truck, available baked in large sizes or lightly steamed and small. The Chairman’s famous baos contain anything from tender pork belly accompanied by pickled daikon to duck confit terrine with green papaya and Coca-Cola, braised with cabbage and mustard seeds. The Chairman has flouted protocol by releasing expertly cooked cuisine from the confines of the kitchen onto the San Franciscan streets – a risk executed to great effect.

Despite humble beginnings as a one-man pushcart and torch show in a Mission alley, the concept of the Crème Brûlée Cart has grown into a fleet of trucks touring the length and breadth of San Francisco. Although the concept of the Crème Brûlée Cart remains simple and straightforward, flavor variations are numerous, ranging from salted caramel, dark chocolate Grand Marnier, peanut butter cup, dark chocolate Chambord and toasted coconut, as well as additional seasonal choices such as egg nog and pumpkin spice. Toppings are also available to fully customize the dessert, from whipped cream to chopped nuts, crumble and marshmallows.

Doc’s of the Bay

Named after John Steinbeck’s Cannery Row, a literary classic based in California, Doc’s of the Bay seeks to upscale the classic burger. Citing a comprehensive list of local and organic suppliers – from which the truck sources its buns, beef and beverages – Doc’s demonstrates passion for quality and detail, epitomized by the home-made bell-pepper ketchup. Striving to elevate the basics to the very highest standard, Doc’s only offers a select few menu items, including the Doc’s Classic – a hand-mixed black angus patty with cheese in a challah bun served with specialty pickles. Vegetarians do not go wanting, as the bean burger provides crunch and flavor enough to tempt even the most dedicated of carnivores into trying something different. 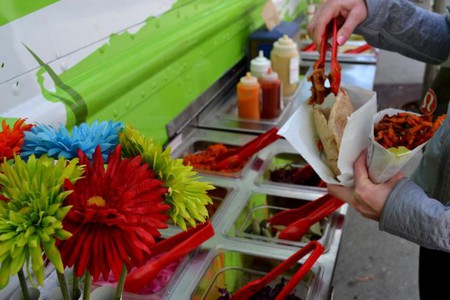 Gleaning inspiration from the Levant and the falafel bars of Amsterdam, Liba’s mission is to provide delicious freshness and sustainability. From locally sourced ingredients to the use of compostable take-away packaging and their commitment to recycling cooking oils into biofuel, this falafel truck is both ideologically and literally ethically driven. Perfectly cooked falafels come as sandwich fillings, scattered over salads or as flavorsome sides, sprinkled with sauces such as tahini or chimichurri. Take lunch into your own hands with Liba Falafel’s do-it-yourself bar, consisting of a multitude of toppings to accompany falafel, from various stewed and freshly grated vegetables to braised eggplant, chutneys, pickles, feta cheese and hummus.

Famed for being the country’s first gourmet rotisserie food truck – equipped with only the very best seasonal organic produce and locally farmed, sustainable meats –Roli Roti brings a deliciously slow-cooked approach to fast food. Owned by the son of a Swiss butcher, Roli Roti has conquered the market for quality food crafted for on-the-go diners. With seasonal menus featuring chicken, pork, beef and salmon – as well as numerous, delicious side dishes and salads – Roli Roti truly redefines the notion of street food. 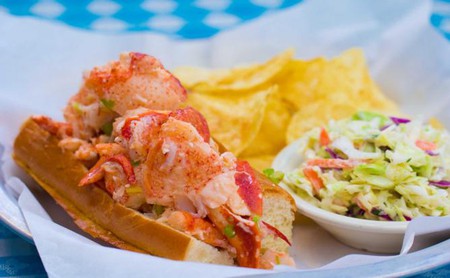 Courtesy of The Chowdermobile

Sam’s Chowdermobile is the mobile extension of the restaurant by the same name in Half Moon Bay, bringing fresh seafood fare from the sleepy Californian coast to the heart of bustling San Francisco. Famed for their award-winning lobster roll that has been featured as one of the top five best sandwiches in America on NBC’s The Today Show, Sam’s also serves up an unrivaled New England-style clam chowder as well as shrimp po’ boys, fried calamari, fish and chips and fish tacos. Sam’s Chowdermobile can also be hired out for clambakes, bringing yet another New England tradition to folk on the West Coast. 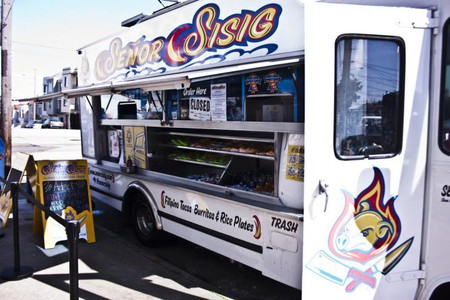 Senior Sisig has worked its way into the established circle of San Franciscan food trucks with its distinctive Mexican-meets-Filipino fusion. With a variety of approaches towards a medley of flavors, this unique cuisine demonstrates its Spanish influences through a strong emphasis on perfectly prepared pork. The truck’s name derives from sisig, a Filipino happy-hour dish made from pig’s head. Senior Sisig has upgraded this traditional staple by using fine pork shoulder marinated for a full day in a blend of spices before being carefully charbroiled. Sisig constitutes the majority of the truck’s dishes, poured into ready-to-hold Mexican forms like the taco and the burrito.