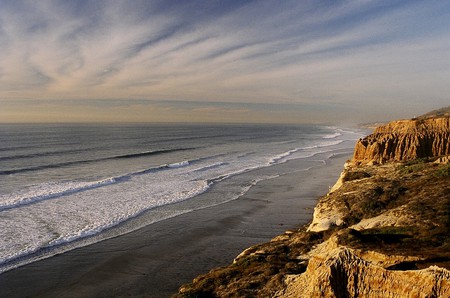 Welcome to San Diego, a beachside city with near-perfect weather all year long. Beyond the surf and sand, this diverse city has plenty to offer when it comes to art, culture, food and architecture. Explore a sea cave, indulge in a tiki drink, check out some fresh art, and eat at one of the city’s longest-running authentic Mexican restaurants, all in the space of a day. Here are 20 must-dos in San Diego (and that doesn’t even include the off-the-beaten-path attractions). 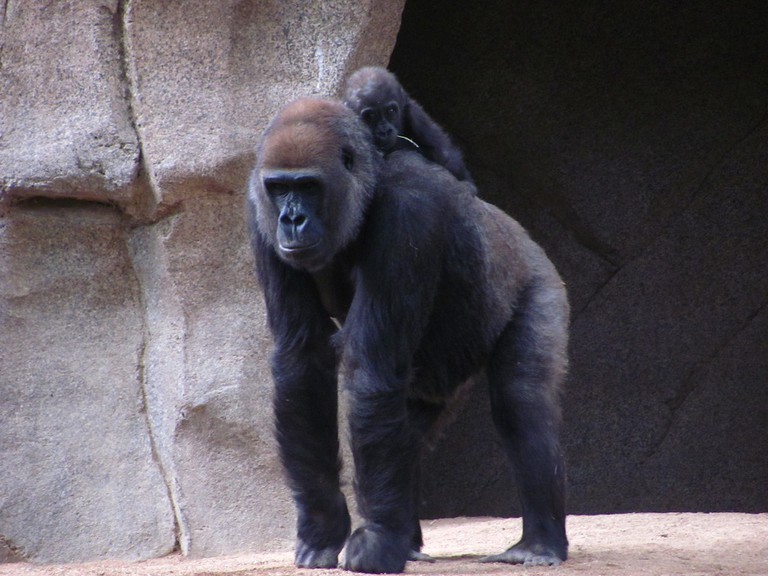 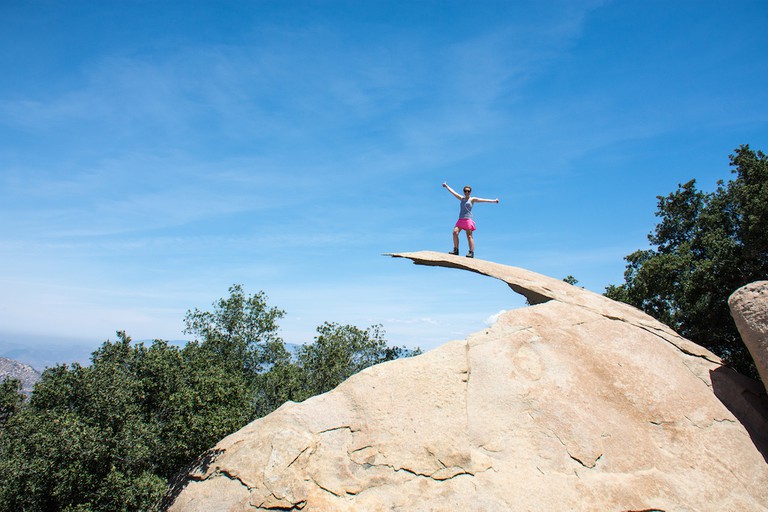 Potato Chip Rock | ©m01229/Flickr
This unique geological formation looks like just a sliver—hence the name “potato chip”—but is sturdy enough to support the weight of a person or two. Many hikers trek to this spot for Instagram purposes, striking yoga or superhero poses. The rock is the reward for a challenging hike up Mount Woodson. Hikers are advised to take along lots of water and start early, as temperatures can be high in this area.
Open In Google Maps
Ramona, California, 92065, USA
+18586684772
Visit Website
Give us feedback

Should you secure a ticket to this annual festival of all things geek, you’ll have your chance to check out panels, screenings, parties and exhibitors. It is the biggest convention in San Diego, maxing out the convention center on an annual basis at about 130,000 attendees, many of them in elaborate costumes. It is also the biggest comic/pop culture festival in the world, according to the Guinness Books of World Records. 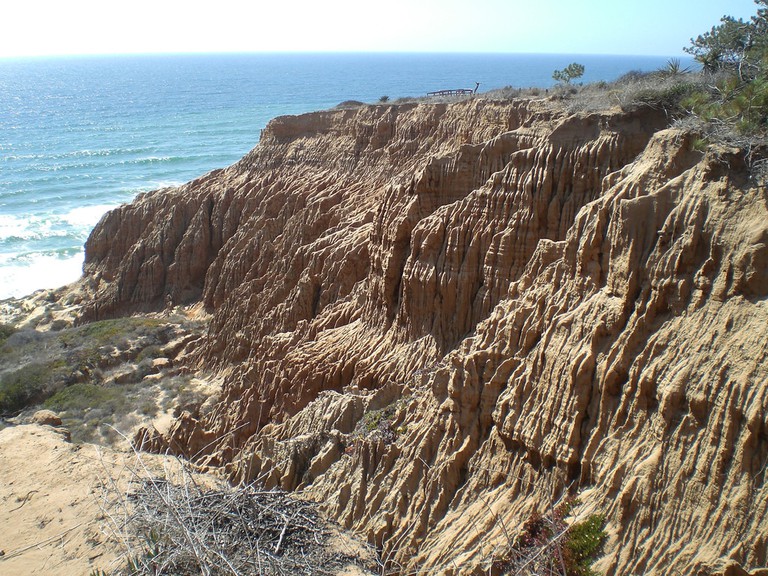 Torrey Pines State Natural Reserve | ©Chris Palmer/Flickr
Torrey Pines State Natural Reserve is home to the Torrey Pine, a particularly rare species of pine tree, well as other native wildlife. The area is popular with hikers as it has numerous trails of various difficulty levels, and offers stunning views of the coast. Guided tours are available on the weekends and some holidays.
Open In Google Maps
12600 North Torrey Pines Road, La Jolla, California, 92037, USA
+18587552063
Visit Website
Give us feedback

Check out the tiki scene

Every year, San Diego hosts a Tiki Oasis convention where some 3,500 people converge to celebrate Polynesian culture. Yet visitors can enjoy tiki anytime at popular venues including The Grass Skirt, a tiki speakeasy, and Bali Hai Restaurant, which has been slinging stiff Mai Tais since 1954. 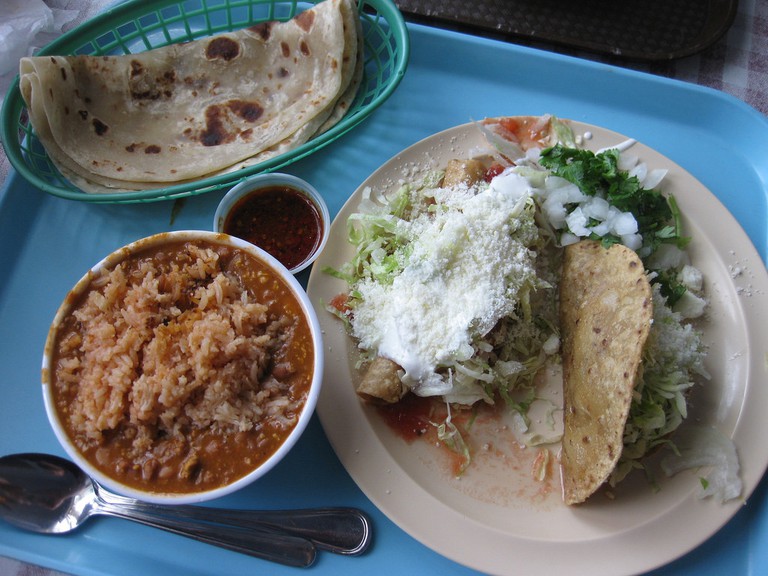 Las Cuatro Milpas | ©y6y6y6/Flickr
This family-owned Mexican restaurant has been in operation since 1933. A simple menu contains a small but formidable list of affordably priced items including rolled tacos, tamales and chorizo & eggs. They serve breakfast and lunch only, and tourists are advised there will likely be a line to get a seat at one of the checkered-cloth tables. Cash only.
Open In Google Maps
1857 Logan Avenue, Barrio Logan, San Diego, California, 92113, USA
+16192344460
Visit Website
Give us feedback

Cafe, Pastry Shop, Coffee Shop, American, Coffee, Pastries
Facebook
Email
Twitter
Pinterest
Copy link
Share
Map View
Though animal cafes have been popular in countries like Japan, Taiwan and South Korea for a while now, San Diego didn’t get its first cat cafe until 2015—the first in Southern California. At The Cat Cafe, guests can enjoy coffee, tea, lunch and desserts in the company of furry friends. Guests select their food and drinks first, then are allowed to spend quality time with as many as a dozen adoptable cats. (Guests who choose not to purchase food or drinks must pay a $5 fee.)
Open In Google Maps
472 Third Avenue, Marina, San Diego, California, 92101, USA
+16197862289
Visit Website
Give us feedback 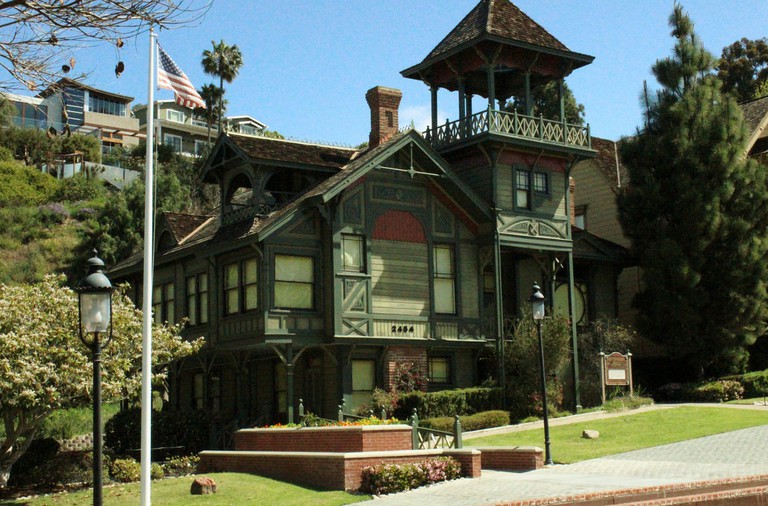 Museum
Facebook
Email
Twitter
Pinterest
Copy link
Share
Map View
This maritime museum is centered around the USS Midway, an aircraft carrier that was in use from 1945 through 1992. The museum opened in 2004, and allows visitors to take an audio tour of the ship. Inside, find the engine room, machine shops, the sick bay, and even the ship’s jail. Other exhibits include films, flight simulators, and 29 restored aircraft. The museum also hosts various activities and events, including fireworks, film screenings, lectures, and concerts from military bands.
Open In Google Maps
910 North Harbor Drive, Marina, San Diego, California, 92101, USA
+16195449600
Visit Website
Give us feedback 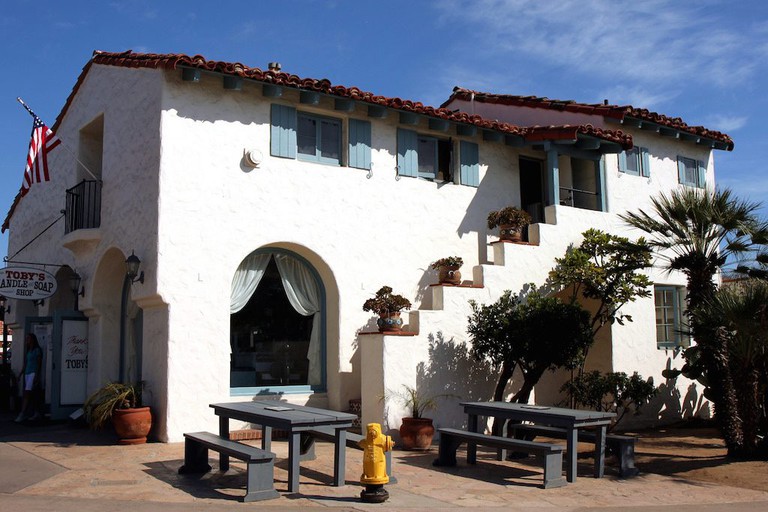 Old Town San Diego | © Prayitno/Flickr
Here, visitors can experience what it might have been like in the 1800s. There are several historic buildings to be found, including five adobes, a hotel dating back to 1870, and a reconstructed courthouse and stable. Educational events occur frequently, including theatrical performances, blacksmith demonstrations, and tours.
Open In Google Maps
4002 Wallace Street, Old Town, San Diego, California, 92110, USA
+16192205422
Visit Website
Give us feedback

Park, Stadium
Facebook
Email
Twitter
Pinterest
Copy link
Share
Map View
The San Diego Padres play at PetCo Park, located in downtown San Diego. With San Diego’s year-round pleasant weather, a ball game is usually a good excuse to sit outside at any point in the season. If baseball isn’t your thing, however, the stadium also hosts a variety of other sports and concerts. Past acts have included The Rolling Stones, Paul McCartney and Taylor Swift.
Open In Google Maps
100 Park Boulevard, East Village, San Diego, California, 92101, USA
+16197955555
Visit Website
Give us feedback

The beachside city of La Jolla contains seven sea caves, ripe for exploring. One cave, known as Sunny Jim, can be accessed via a tunnel in the back of the La Jolla Cave Store. The rest can only be accessed by water. Visitors can book kayak tours, which not only allows them to see these magnificent caves, but also get some exercise, too. 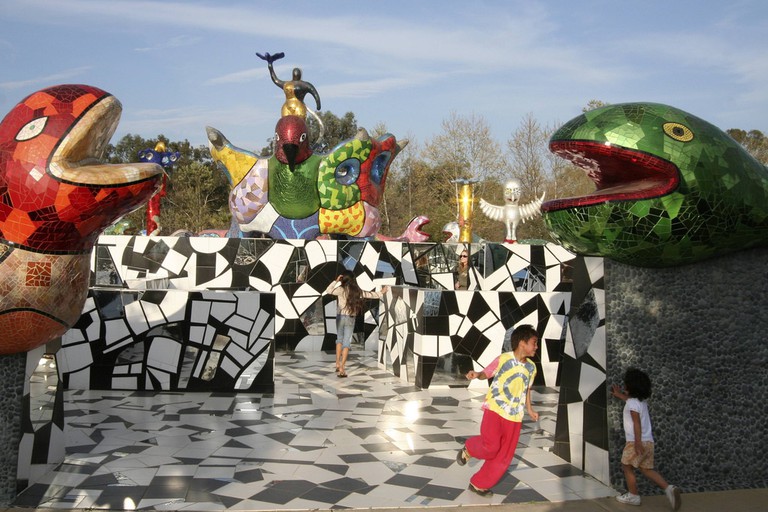 While it’s true that you can probably drink craft beer in just about every major American city, San Diego County is home to a staggering 125 craft breweries. Heavy hitters include Stone Brewing Co., Modern Times, Pizza Port, Bellast Point Brewing Company, AleSmith Brewing, Green Flash, and Karl Strauss. From sours to stouts, there truly will be something for every beer aficionado. The city of San Diego maintains a list of breweries, and many are available for tours and tasting. Or, you can book a tour via companies like San Diego Brew Tours or Scavengers. But if you really want to try as many beers as possible, plan a visit that aligns with San Diego Beer Week, during which numerous beer-themed events will be happening all over the city. 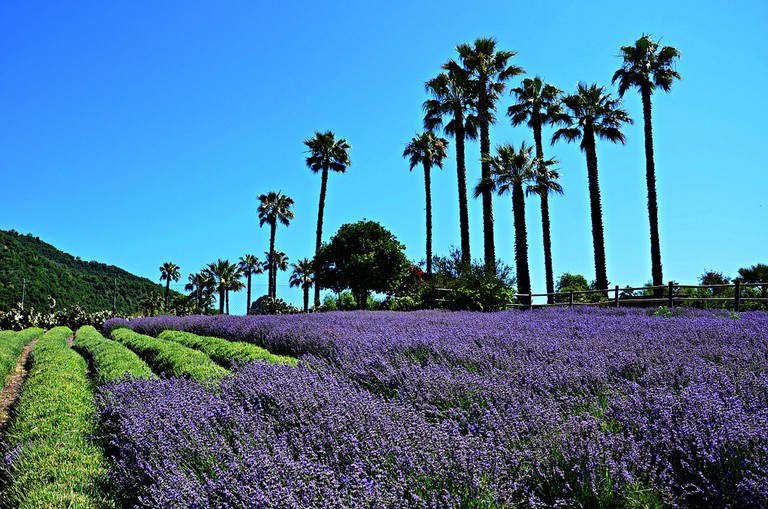 Keys Creek Lavender Farm | ©Art4TheGlryOfGod by Sharon/Flickr
Flower-loving visitors to San Diego County could swing by the Carlsbad Flower Fields and the Keys Creek Lavender Farm, located in Valley Center, in one day. Keys Creek is an organic lavender farm, where the fragrant flower is grown and then used in a variety of products, including lotions, essential oils and perfumes. The fields are open to the public in May and June, and ticketed tours are available. You can also book a room at the farm’s cottage, or attend a chef-driven dinner on the property.
Open In Google Maps
12460 Keys Creek Road, Valley Center, California, 92082, USA
+17607423844
Visit Website
Give us feedback 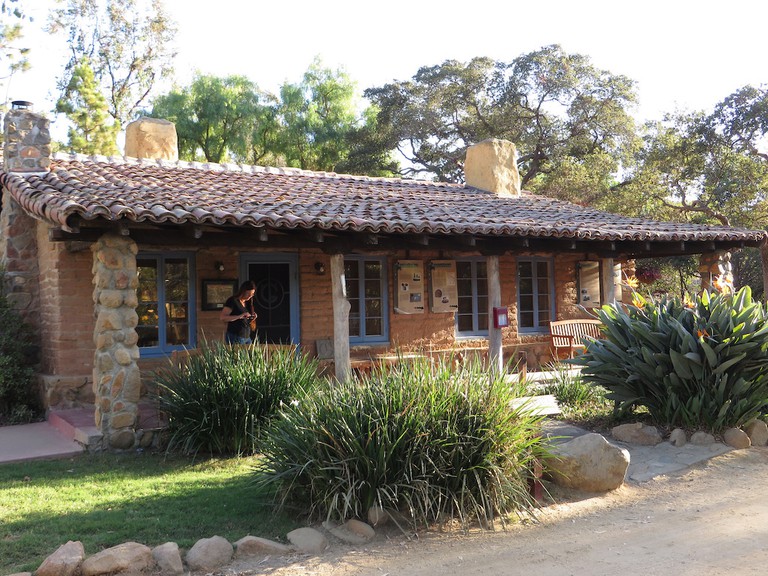 Lee Carrillo Ranch | ©Ken Lund/Flickr
This 27-acre ranch was built by actor and conservationist Lee Carrillo (The Cisco Kid) in the 1830s, but it’s now a Historic National Landmark that has been open to visitors since 2003. Find peacocks, windmills, nature, and historic adobe structures via a guided or solo walking tour. A video on the history of the ranch plays in the old barn. Guests are advised to wear athletic clothing, bring along some water, and take a step back in time.
Open In Google Maps
6200 Flying Leo Carrillo Lane, Carlsbad, California, 92009, USA
+17604761042
Visit Website
Give us feedback 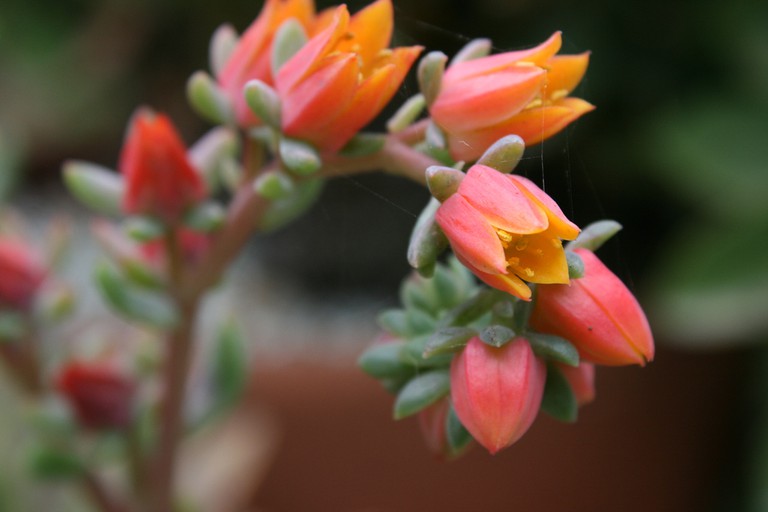 Gold on the inside, San Diego Botanical Garden | © Quinn Dombrowski/Flickr
San Diego Botanic Gardens is a sprawling and serene 37-acre oasis with several gardens, many organized by geography. See plants from Australia, Africa, Central America, the Canary Islands and a tropical rainforest, as well as native Californian plants. There’s a garden of olive trees, a bamboo grove, a bird and butterfly garden, and herb garden, too. Guests are free to wander the grounds at their leisure, and may pack a picnic to eat in the Eucalyptus Garden.
Open In Google Maps
300 Quail Gardens Drive, Leucadia, Encinitas, California, 92024, USA
+17604363036
Visit Website
Give us feedback
Give us feedback