Where To Shipwreck Dive In The US 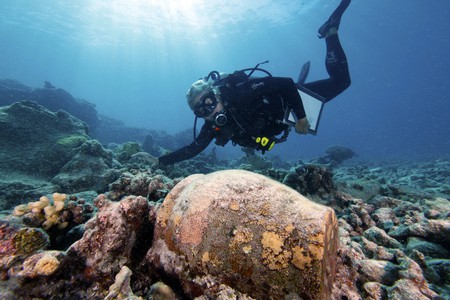 Real shipwrecks are filled with history, preserved as underwater museums that were once walked by world travelers, warriors, pirates, or merchants – some even thousands of years old. There are an estimated three million shipwrecks in the world, and only a small percentage of these have been explored, drawing marine archaeologists and history buffs to the bottom of oceans, rivers, and lakes around the globe. There are thousands of shipwrecks in the US alone that are waiting to be discovered – from the Great Lakes to the islands of Hawaii.

Located on the southeastern tip of the US, Florida is a prime destination for sinking vessels. For hundreds of years, this part of the country has seen the arrival of European ships and Spanish explorers, years of war and hurricanes, and waves of migrating groups from across the oceans. In Key Largo, divers can explore USCGC Duane, a shipwreck from 1987 that once carried WWII and Vietnam soldiers, or the USS Spiegel Grove, sunk in 2002. As one of the state’s oldest artificial reefs, expect schools of barracuda and coral-covered gun mounts. Pensacola’s 2006-sunk ship, USS Oriskany, and Islamorada’s 1985-sunk Eagle were put to rest by wild hurricanes, while Key West’s Vandenberg was intentionally sunk in 2009 as an artificial reef. Should you need more underwater gems to explore, Florida is teeming with them. 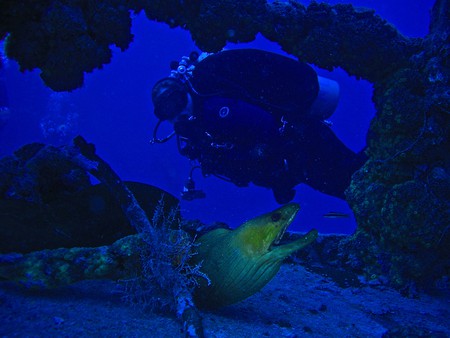 Surrounded by the waters of the Pacific Ocean, many of the ships and canoes that sailed to Hawaii were destined to lie on the floors of the ocean. On Oahu, divers can swim the Vought F4U Corsair – a fighter aircraft that was ditched by its pilot in 1945 – alongside sharks, frogfish, and a garden of eels. There’s also the USS Yo-257, an intentionally sunk ship filled with stingrays. Kona’s 45-foot sailboat Engedi lies in 100 feet of water, while the Carthaginian II, a former whaling museum, rests at the bottom of the Lahaina Harbor. The Papahānaumokuākea Marine National Monument plays host to hundreds of shipwrecks, but the area is protected, and many are unreachable without a permit. 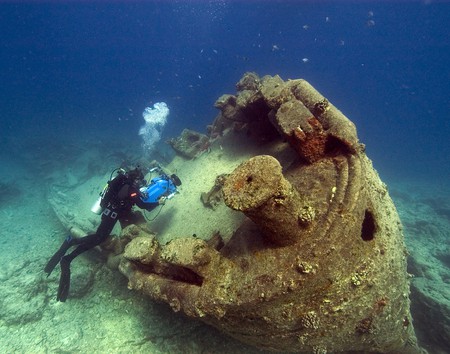 The Great Lakes have been dubbed the ‘Shipwreck Capital of the World’ by many. But that’s because under the area’s 95,000 square miles of water lie nearly 5,000 shipwrecks. Michigan is a shipwreck diver’s dream: in Alpena, discover the 1906-sunk steel steamer Grecian while swimming through its engine, boiler, cargo holds, and decks; or head to the underwater ship graveyard at Thunder Bay National Marine Sanctuary. Here, visitors can discover the steamer Albany or the 1875-sunk Cornelia B. Windiate – an almost perfectly intact ship under 180 feet of water. First-timers should be sure not to miss the Sandusky, an 110-foot-long ship that sank in 1856 just west of Mackinaw City. 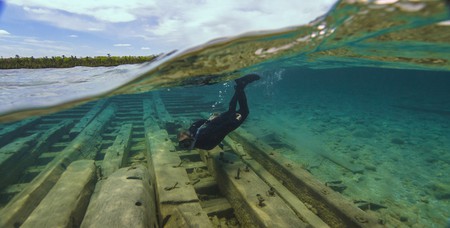 North Carolina was the site of some of the nation’s earliest colonies, bringing ships from England as early as the 1580s. For a look into this state’s centuries-long history, head to Morehead City. Here lie dozens of shipwrecks to explore, including the famous 218-foot-long German ship, U-352, resting under 115 feet of water at a 45-degree angle. The wreck has become an artificial reef and has been worn away on the outside, allowing divers to peer into the interiors of the ship. There’s also the USCGC Spar, home to dozens of tiger sharks, and Papoose – a 412-foot freighter 36 miles south of the Beaufort Inlet. Visitors must take a two-hour boat ride to reach the site, but it’s well worth it: abundant marine life, deep blue waters, and preserved marine history make for an unforgettable experience. 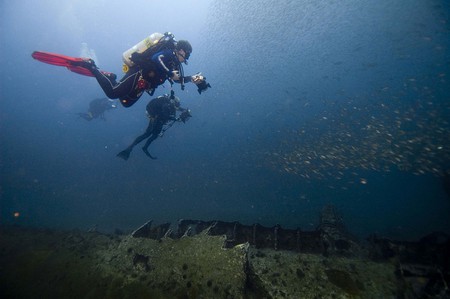 Wisconsin, situated along the Great Lakes, is another shipwreck diving gem. Home to two proposed national marine sanctuaries, this state contains an extraordinary collection of nearly 40 shipwrecks. And, thanks to the cold, fresh water, they are some of the best-preserved wrecks in the world. The Prins Willem V is one of the most popular shipwrecks in the region at 254 feet long. Divers can swim through this nearly intact wreck and its various rooms, levels, wheelhouse, and crew quarters just four miles offshore from Two Rivers. Bigger and deeper, the 338-foot SS Milwaukee is around 100 feet underwater and less than ten miles from the Milwaukee harbor. For a unique dive, the SS Wisconsin in Kenosha – sunk in 1929 – boasts three cars and a tractor still in its cargo. 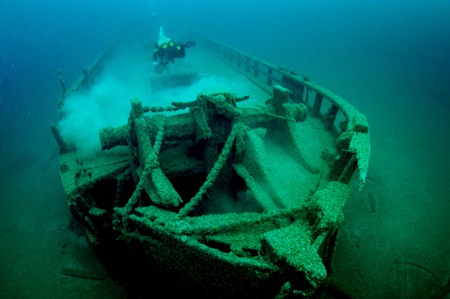