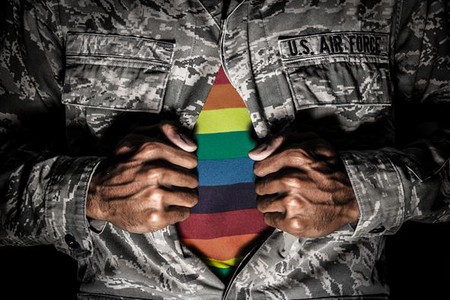 Earlier today Donald Trump tweeted that under his administration transgender people would be prevented from serving in the United States military. Here are a few countries from whom the Commander in Chief could take some pointers.

Despite his firmly conservative views, Trump frequently stated that he would support LGBT issues while campaigning for the presidency, but has since begun to overturn policies concerning transgender rights that were initiated during Barack Obama’s time in office.

While military policy regarding LGBT individuals will almost certainly remain a contentious issue within the United States, there are many other countries around the world that accept new recruits without questioning their sexual orientation or gender identity.

After consultation with my Generals and military experts, please be advised that the United States Government will not accept or allow……

….Transgender individuals to serve in any capacity in the U.S. Military. Our military must be focused on decisive and overwhelming…..

….victory and cannot be burdened with the tremendous medical costs and disruption that transgender in the military would entail. Thank you

New Zealand’s government formally outlawed all forms of discrimination related to employment in 1993 by introducing legislation called the Human Rights Act. As this bill prevented employers from discriminating against people due to their sexual orientation, it effectively banned military personnel from profiling LGBT individuals. The Kiwi armed forces currently upholds many policies that are specifically tailored to make military service more inclusive and formally supports the rights of transgender personnel.

In 1974 the Netherlands became the first country in the world to outlaw military discrimination based on homosexuality. The Dutch have since introduced many other military policies related to LGBT rights, and the Netherlands is among the 19 countries in the world that allow transgender people to openly serve in the armed forces.

Like every other nation on this list, the UK allows transgender personnel to enlist in its military and expect the same treatment as every other service member. Discrimination towards any personnel due to their sexual orientation or gender identity is formally prohibited, and forcing someone to come out as LGBT is punishable as a criminal offence.

It has been illegal in Australia to discriminate against military personnel based on their gender identity since 2013, and there are reportedly 15 transgender individuals enlisted in the Australian Defence Force. Famed cricket player and commentator Cate McGregor is the most famous transgender person currently serving in the Australian military, and has spoken about her experiences with several news outlets over the past few years.

Gay men have been able to openly serve in the Swedish armed forces since the late 1970s, and the nation’s government formally outlawed all forms of workplace discrimination in 1987. This policy was extended to include transgender people in 2008, and the Swedish military publicly supports its LGBT service members. It is also worth noting that Sweden was the first country in the world to permit transgender people to legally correct their gender and has defended this right since 1972.