Was Johnny Cash The Father Of Gangsta Rap? 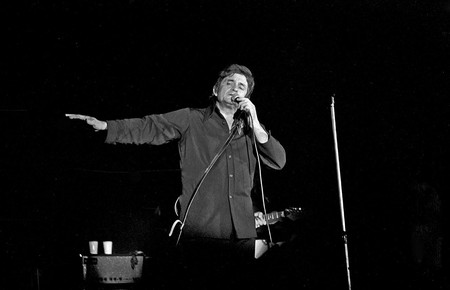 Hailed as “a real American gangster” by Snoop Dogg — the highest of praise — it has long been suggested that Johnny Cash could have been a pioneering figure amongst gangsta rappers. This idea seems at odds with the God-fearing country singer, until you realise that Cash’s songs do tend to linger on such topics as violence, murder, prison, and drugs — much like his rapping counterparts. So was he the father of gangsta rap?

Cash was an emblem of the working middle class, and his was a voice that spoke out for the frustrations of the disenfranchised. He was known as the Man in Black, and, in the song of the same name, he explains that wearing only black was a conscious wardrobe choice, employed to make a comment on social injustice: “Just so we’re reminded of the ones who are held back.”

He mentions his dark clothing in other songs, including “Cocaine Blues,” where he sings, “I was arrested when I was dressed in black.” This line, about being caught by the police, along with the general theme of the song, which is drugs – aligns his further with the “gangsta” lifestyle perpetuated through the strand of rap music. Although Cash is singing from the perspective of an adopted character, it is hard to disassociate him entirely from it, given his history battling a severe addiction to amphetamines in the late ’50s.

Cash perpetuated this black-clad outlaw personality to identify with the large inmate community in the U.S. He performed and recorded his music in prisons to enthusiastic crowds. The most famous image of Cash, snarling and giving the camera the middle finger, was taken during a concert in San Quentin prison in 1969, and supposedly nearly provoked a riot moments after it was taken. 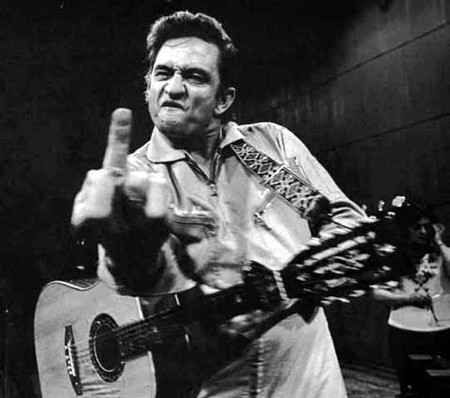 In “Folsom Prison Blues,” Cash takes on the character of a prisoner himself, identifying with his inmate fan base. The chilling couplet, “I shot a man in Reno / Just to watch him die,” is now immortalised as one of his most famous lyrical works. The murderous character is revisited in “Delia’s Gone,” a song which is sung from jail, detailing how he tied his lover, Delia, to a chair, and shot her twice before she died. The song is “unapologetically misogynistic,” writes O’Hagan in The Observer. Gangsta rappers commonly and derogatorily refer to women as “bitches” and “hoes” — though it is perhaps unfair to suggest that Cash is at such a level of offence.

What must be noted is that Cash was a famously conscious man, an artist tortured by his thoughts and actions. In 2013, Rolling Stone revealed, pulling from Robert Hilburn’s autobiography of the singer, Johnny Cash: The Life, that a young Cash was interested in Frankenstein’s monster, with whom he empathised; the monster was “made up of bad parts but trying to do good.” Despite their crimes, the characters in Cash’s songs are drenched in regret, and, as Quentin Tarantino has noted, “his songs have an overriding morality and humanity.” This is at odds with the violent braggadocio infused into the gangsta rap tradition, and so it is here that the line must be drawn.