U.S. Hate Groups Sent Scurrying Back to Darker Edges of the Internet 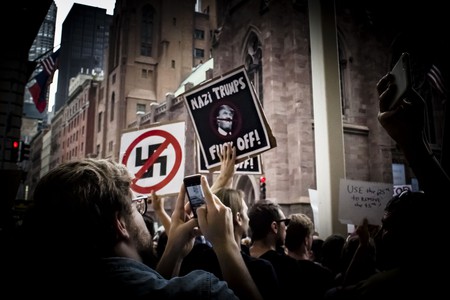 The President of the United States may not be able to fully condemn white supremacists, fascists, and the far right, but at least major internet companies are – by banning hate groups and pulling domain registrations.

The Daily Stormer originally directed readers to its community on Discord, the voice and text chat app. But Discord then shut them down there, and also banned other right wing servers on the app.

“We unequivocally condemn white supremacy, Neo-Nazism or any other group, term, ideology that is based on these beliefs. They are not welcome on Discord,” Discord CMO Eros Resmini told Polygon. “When hatred like this violates our community standards we act swiftly to take servers down and ban individual users. The public server linked to AltRight.com that violated those terms was shut down along with several other public groups and accounts fostering bad actors on Discord. We will continue to be aggressive to ensure that Discord exists for the community we set out to support – gamers.”

Facebook is also removing links to a Daily Stormer article that criticized Heather Heyer, the protester who died standing up to fascist groups in Charlottesville this weekend. Only links that explicitly condemn the source material will not be taken down.

The Reddit community r/AgainstHateSubreddits led the charge on that platform, calling for the subreddit r/Physical_Removal to be banned. Reddit obliged and kicked the subreddit, which had a history of racist comments endorsing violence, off the platform.