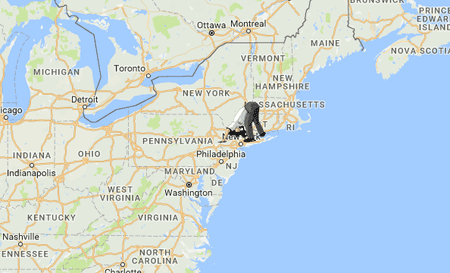 We’ve all had that thought: where would I end up if I dug a hole straight through the Earth? China? The US of A? Anywhere but ‘here’, basically. In an effort to tell you all exactly where you’d end up, some clever clogs invented the Antipodes map to show you all where you’d end up exactly.

For those inquisitive souls, wonder no more. For those of us that hail from the UK, they naturally think it’s Australia, for the USA the lazy thought is China, South Africa to the North Pole and so on.

Forget all that nonsense, because this rather beautiful interactive map will pinpoint exactly (yes, really) where you’d actually end up if you were crazy enough to bore your way through the Earth’s crust, assuming you make it through the intensely hot molten core that would ordinarily kill you.

So where would you end up? Let’s take a closer look.

Live in Brooklyn? Dig through the Earth and you’ll miss Australia. As Antipodes says, ‘Watch out for the sharks’…

Live in Spain? No you won’t end up in rural Russia. Well, where then? Lovely New Zealand, of course…

Reside in Hebei, China? Your next holiday will be in Argentina!

The most dangerous place to dig from? Europe. Most European countries lead straight to the middle of the ocean. Sad times.

If you want to give the map a go, try it for yourself here, and simply enter your location to find your antipode point. Happy digging.

Love maps? This one shows you the most popular foods in Europe!