This Map Reveals Exactly When Each Country Gave Women the Vote 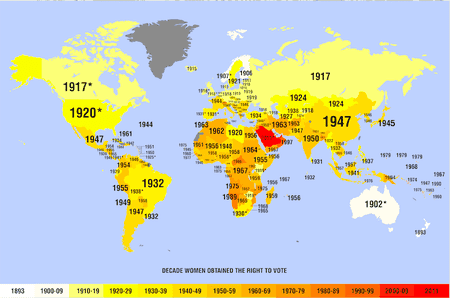 While we haven’t yet reached gender equality, we’re closer to it than we used to be. International Women’s Day celebrates that fact, while drawing attention to the work that still needs to be done.

This map depicts the year that women received suffrage in every country around the world. It’s a solemn picture, with women in Saudi Arabia not gaining the right to vote until 2011.

The first country to give women the vote was New Zealand in 1893, with Denmark and Iceland in second place in 1915.

The map was created by Cuba Holidays, who wanted to celebrate the fact that Cuba was one of pioneering nations in Latin America to give women the vote, doing so in 1934.