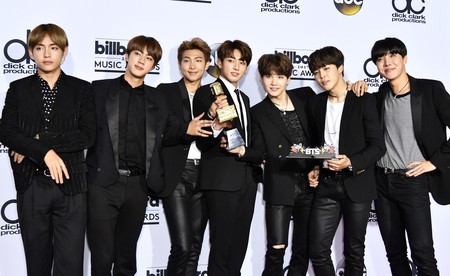 The group, who are known as Bangtan Sonyeondan in Korean or ‘Bulletproof Boy Scouts’ in English, took home the Top Social Artist prize last night at the ceremony in Las Vegas.

The award was voted for by fans, with BTS defeating the likes of Justin Bieber, Selena Gomez, Ariana Grande and Shawn Mendes, who were all in the same category.

The group said in their acceptance speech: ‘We still can’t believe that we’re standing here on this stage at the Billboard Music Awards.

‘It’s so great to see all the artists we admire. To be in this category with such great artists, we’re just really honoured.

‘And most importantly, this award belongs to all the people around the world that shine their love and light on us by the millions, and make BTS proud. Please remember what we say, love yourself.’

After the win, the band tweeted that it was a ‘dream come true’.

BTS have 9.7 million followers on social media, and their music videos usually get around 100 million views each on YouTube.

They have performed sold-out shows in Los Angeles, Chicago and New York.

Rapper Drake was the big winner last night, beating Adele’s record for the most awards after picking up 13 prizes including Top Male Artist, while Zayn Malik was named best new artist.