The Story Behind the Vietnam Veterans Memorial 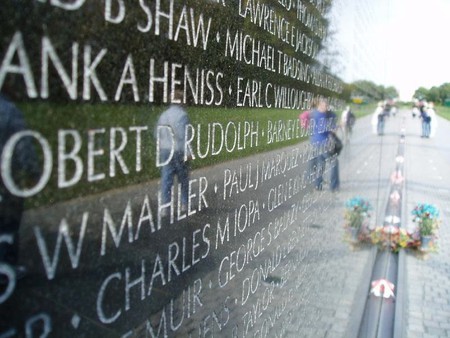 The Vietnam Veterans Memorial, also known simply as The Wall, has a fascinating history. The Vietnam War is a storied time of American history, and getting a memorial tribute to the troops was a complex and rigorous process.

The man behind the wall

The idea came to serviceman Jan Scruggs in 1979. Scruggs served in Vietnam and was wounded twice. He returned to the U.S. and studied psychology, with a deep interest in post traumatic stress disorder. The inspiration for the wall came from his desire to remember those who served and heal the nation that lost so many. He put $2,800 of his own money toward the wall.

“The memorial had several purposes,” he explained in an interview with the Vietnam Veterans Memorial Fund. “It would help veterans heal. Its mere existence would be societal recognition that their sacrifices were honorable rather than dishonorable. Veterans needed this, and so did the nation. Our country needed something symbolic to help heal our wounds.”

The Vietnam Veterans Memorial is not a war memorial, but a tribute to those who lost their lives or went missing. The $9 million to build it came entirely through fundraising, with no federal funds going to the project. However, the project needed Congressional permission to build on the mall.

Scruggs, along with the help of other passionate veterans, formed the Vietnam Veterans Memorial Fund. The group lobbied the House and the Senate for the land. On July 1, 1980, President Jimmy Carter signed the legislation, donating two acres of the National Mall, near the Lincoln, to the project.

The woman behind the wall

The VVMF hosted a competition to choose the design for the memorial. The rules of submission were simple, the memorial must: “1) be reflective and contemplative in character; harmonize with its surroundings; contain the names of those who had died in the conflict or who were still missing; and make no political statement about the war.”

Over 1,000 final submissions came in—enough that they had to be stored in an airplane hangar. Submissions were judged anonymously for fairness.

Her design was meant to be a “quiet protected place onto itself.” She told Biography.com that she imagined carving into the earth, and creating a place of healing. Since the Vietnam Veterans Memorial, Ying has designed a Civil Rights Memorial in Montgomery, Alabama, as well as Yale’s University Women’s table, a tribute to the first female students allowed at the Ivy League.

The wall is a paneled, V-shape. It is numbered to help find names of those deceased or missing in action. The names are organized by date of death, or date person went missing, then alphabetical order. Names with a diamond represent those who were killed, and the + sign represents those missing. The + is not meant to be religious, but is designed to be easily turned into a diamond if the death is confirmed.

The black granite walls form a sound barrier, meant to create a tranquil space, while not overwhelming the visitors. The mirror-like surface reflects the National Mall, providing viewers peace and a chance to introspect. 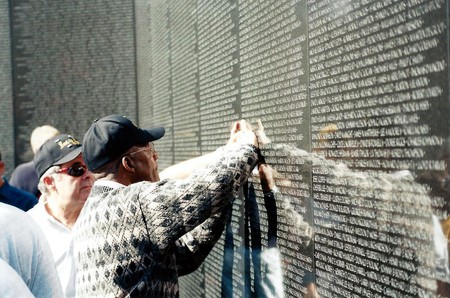 However, the initial public response to the design was one of outrage. Citizens found the black granite to be symbolic of a trench or tombstone—a black mark on America’s history. Some drew parallels with the V-shape to mean the controversial “peace symbol.”

Backlash was so strong against Ling’s original design that a flagpole and the Three Servicemen Statue were added to the memorial grounds, though away from the wall to preserve her design aesthetic. In 1993, the Vietnam Women’s Memorial was also added to the grounds.

The Wall was dedicated on November 13, 198, when public outcry had largely diminished. At this time, there were 57,939 names on the wall. Eight of those names represent female nurses. Since the dedication, more names have been added. In 2017, the count was 58,318. In its history, the entirety of the names have been read seven times. The readings take place over Veterans day and it takes more than 65 hours spread over four days to complete.

Items ranging from flowers to a motorcycle have been left at the memorial. Park Services pick up the tokens each day and take them to an off-site facility (not open to the public). There is a virtual tour of things left at the wall, showcasing a collection of items, available online.

As Lin intended, the wall serves as a healing ground to veterans, and family and friends of those who lost their lives in the war.