The Origins of the United States' National Anthem, "The Star-Spangled Banner" 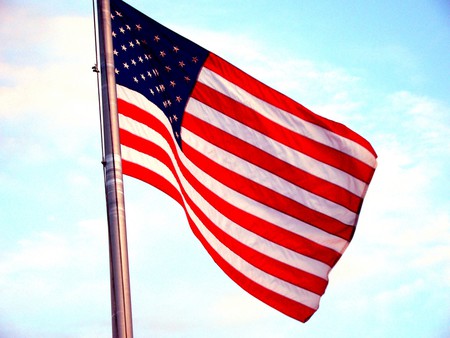 How exactly did “The Star-Spangled Banner,” the American national anthem, come to be?

On the night of September 13, 1814, when British troops were shelling Fort McHenry in the Baltimore Harbor during the War of 1812, 35-year-old lawyer Francis Scott Key was detained on a ship by the British. Key was convinced the British would triumph, but when he woke up, the smoke had cleared in “the dawn’s early light” and he saw the U.S. flag raised over the fort in victory.

Overcome with emotion at this unexpected victory, Key wrote a poem inspired by the flag. His brother-in-law had the poem distributed under the name “Defence of Fort McHencry” and set to the tune of a popular English song at the time (“The Anacreontic Song”), and the poem soon became popularly circulated. In November of 1814, a music store in Baltimore printed the patriotic song with sheet music for the first time under the more lyrical title, “The Star-Spangled Banner.” 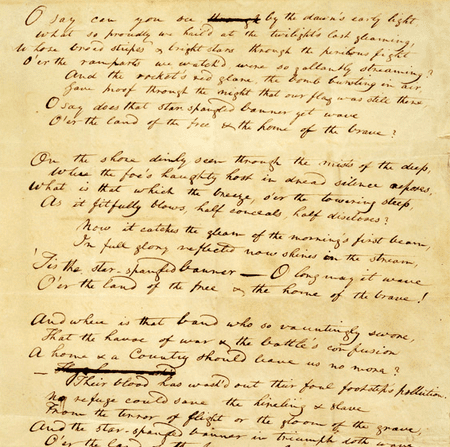 Although it was a prominent patriotic song for a long time, it was only recognized in 1889 for official use by the United States Navy, and in 1916, President Woodrow Wilson signed an executive order designating it as “the national anthem of the United States” for all military ceremonies. Because the song was so popular, it had dozens of different versions, so President Wilson commissioned an official edition from the U.S. Bureau of Education, who enlisted the help of musicians. The standard version was first performed at Carnegie Hall in December 1917. 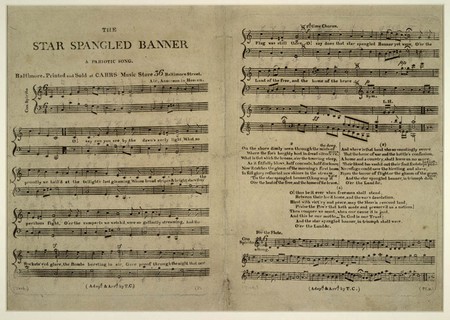 It was not until March 3, 1931 that a measure passed Congress and was signed into law by President Hoover formally designated “The Star-Spangled Banner” as the national anthem of the United States, a measure which failed 40 times earlier.

The original flag that inspired the national anthem is on display at the National Museum of American History in Washington, D.C.