The Greatest Speeches and Team Talks in Sport 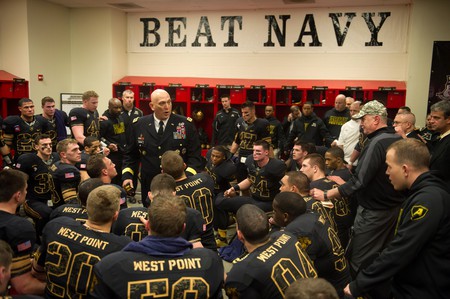 To celebrate World Speech Day, we got psyched up, shed a tear and went into battle with the greatest collection of team talks and speeches in sporting history.

The French Ligue 1 soccer club had one game to survive relegation from the league, so the coach did this. Unsurprisingly, they managed to secure victory and stay up.

Down at half-time in the state final, Coach Taylor picks his players back up again. Clear eyes, full hearts…

Just to prove it was no fluke, Quinnell followed it up five years later…

Kurt Russell does his small part to help win the Cold War thanks to an ice hockey match in Miracle (2004).

Forwards coach Jim Telfer delivered a speech to his pack when the Lions killed the Springboks in the first test match of 1997.

Head coach Sir Ian McGeechan followed it up before the second test to help ensure another victory and win the series as a whole.

We have no idea who this, where this is or what the team is, but we’d like to meet him.

Need to give a team talk in two languages at once? No problem for the mesmeric fly-half. Anglo-French inspiration to an international, multi-lingual XV.

Because, well, it’s impossible to leave out.