Somewhere Between Iris and a Sack: Finding My Style Between the High and the Slow 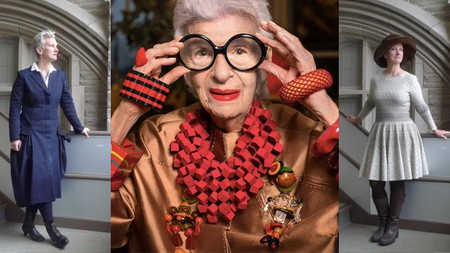 I’m sure I’m not alone in fantasizing about what I’d say if Time Out or New York magazine (or anybody, probably) stopped me and asked me how I’d define my style. I’ve often (in my mind) resorted to things like “eclectic” (cop-out), “architectural” (sometimes), or “whimsical” (while the term is burdened with a sickly-sweet connotation, many of my sartorial choices are governed by whim).

Due to my engagement with slow fashion, I’ve recently found myself trying to finesse that description as well as understand what is really at the root of my style. I was always encouraged to pursue my fashion influences, which included designer items, thrift store and vintage shop finds, and what we used to refer to as “ethnic” clothing (often embodied by mirrored skirts and dresses from India).

I was reared by a very stylish mother, one who introduced me to avant-garde Japanese designers when I was 13. I was voted “Most Radical” in the eighth grade when I really wanted to be “Best Dressed.” I quickly understood that my title came not from my politics (I was 13, for god’s sake) but from my style. Clearly my classmates had trouble understanding that. You can see why “eclectic” might actually be an appropriate term for me. 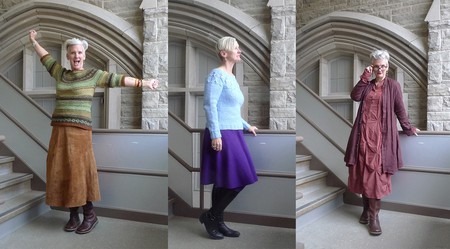 In the ‘80s, I found my tribe in the hardcore punk scene. It fused politics to the act of getting dressed—maybe my 8th grade friends weren’t so wrong after all. While I was now more interested in challenging concepts of female beauty and power, I still wore Comme des Garçons to shows. A friend once called me “Claudia, the bohemian punk.”

Fast forward a few decades—I had taught myself to knit, and I’d started to do some sewing. Then I learned about slow fashion, and it spoke to me. The problem was that I had a preconceived notion of what that meant (predominantly fostered by some of the blogs I followed, which were frequently authored by homesteaders and crafty types) and seemed like the style equivalent of ‘70s vegetarianism: beige, shapeless, and good for you (but not terribly exciting). Something along the lines of a hand-sewn hemp sack.

Looking to live my life in a manner that reflected my politics and values, I started getting into more “organic” (think fabric, shape, dyes, process, etc.) designs like tunics and shift dresses and items made by individuals and sold on Etsy. I may have been trying to pretend that I was running an organic farm. Often I made a dress or skirt because I’d seen it on one of the bloggers only to realize later that maybe that really wasn’t my style.

I also had a Marie Kondo moment, which seemed to fit with a slow fashion lifestyle. I felt a little guilty, however, that so much of my closet “sparked joy.” Wasn’t I supposed to be whittling down to a simple and ethical wardrobe? Was I the fashion equivalent of a Cashmere Commie? It was an existentialist crisis. Then I watched Iris, the documentary about Iris Apfel, the self-described “world’s oldest teenager,” and I was swept away by the exuberance (and guilt-free!) way she dressed. I watched in awe as she piled on accessories, roamed through clothing-filled rooms, and put together outfits that I could only envision on her. I wanted a little of that performativity back in the way I dressed, and I didn’t want my closet to be divided by “high” and “slow.” There had to be a middle ground.

I realized I’d unnecessarily had a “before” (my engagement with slow fashion) and “after” view of my wardrobe. All the designer or brand name pieces were relegated to the “before” category and therefore were to be viewed with suspicion, and all the things I’d made myself or were bought with slow fashion in mind were “after.”

If we go back to my teenage style—the thrift/designer/DIY sandwich—it’s easy to see that slow fashion has been a part of the way I dress from the beginning. While I don’t buy that “all high fashion [is] slow fashion because of the time it takes to make,” as one former editor at a mainstream fashion magazine once told me, a lot of it is. And a lot of it is still in my closet, decades after I got it, which falls under the slow fashion idea of having items that last and that get worn time and again. The return of the exaggerated shoulder, as seen on the runways recently, had me reaching the other night for that same Comme des Garçons jacket I wore in the ‘80s (don’t gasp). I threw it over a turtleneck from Three Dots (made in the USA) and paired it with a vintage Matsuda skirt that I got from my mother. At the party I attended, the bartender (who was younger than my jacket) said, “I really like your look.” I felt like I’d hit the sweet spot.

I’ve also discovered a whole range of pattern designers out there who are frequently referencing trends from the runway. While I definitely have access to a plethora of variations on the “sack,” as I now affectionately call it, I can also make vintage-inspired or on-trend pieces. I’ve found bloggers and Instagramers whose me-made wardrobes defy expectations of what slow fashion looks like. These women are crafting closets filled with skinny jeans (or my preference, boot-cut or flared jeans), edgy dresses, and totally wearable skirts and tops. Even knitting patterns are referencing looks from the runway, and my own knitting skills are tempting me to copy (for personal use only!) a Burberry sweater. 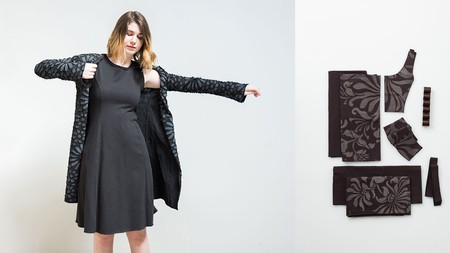 Nonetheless, if you look at my style influences, clearly a good sack is a theme—from early Japanese designers to ‘90s J. Morgan Puett to contemporary Kedem Sasson. The idea that slow fashion has to be bland or eschew designer labels is a false dichotomy. That’s the equivalent of thinking that vegan cupcakes have to be dry, grainy, and a pale comparison to the original. If asked today to describe my style, I’d probably have to say, “somewhere between Iris and a sack.”