Smothered, Covered, and Chunked: The History of Waffle House 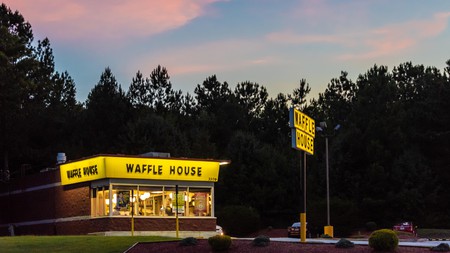 In 1955, Tom Forkner and Joe Rogers Sr. opened a breakfast spot that has become one of Georgia’s greatest contributions to mankind: the humble, reliable Waffle House.

It’s a steadfast beacon in the night and a haven for drunkards who must reclaim sobriety or at least deter a hangover. Waffle House welcomes the hungry and trashed at all hours of the day; it has a “no-water” menu during droughts and even operates during hurricanes. But most importantly, it’s a place where customers can be themselves and develop meaningful relationships across the counter.

Fate played a huge role in Waffle House’s genesis: Forkner moved to Avondale Estates after working on the Manhattan Project in Oak Ridge, Tennessee, while Rogers relocated to work at a new Toddle House (a quick-service, 24/7 breakfast chain). Forkner, whose father helped develop the city of Avondale Estates, sold a house to Rogers, and the two became next-door neighbors and close friends. During the 1950s, Avondale Estates was an agrarian community with few restaurants that were open late or around the clock—an exception was the Toddle House where Rogers worked. Forkner’s brother also owned a building in the area. 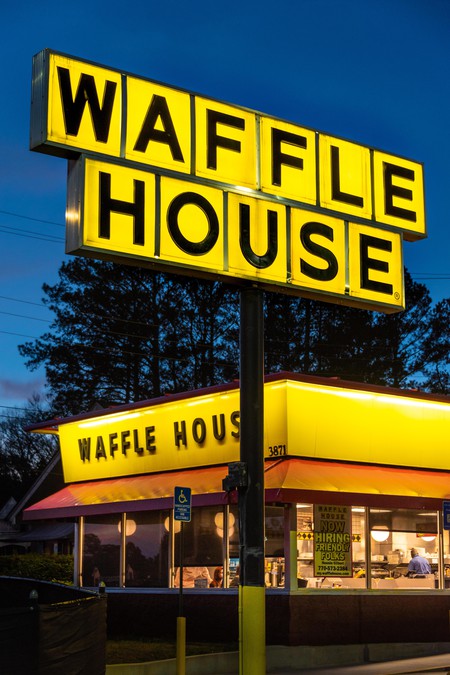 Waffle House’s momentum didn’t build up until the 1960s, when Rogers left the Toddle House entirely, Pat Warner, Waffle House’s director of public relations and external affairs, said. Rogers’ expertise in the restaurant industry and customer service was a huge asset. Above everything else, Waffle House values the employee-customer relationship: It’s the vehicle for a neighborhood feel in the franchise era.

Like with most small businesses, Forkner and Rogers thought they’d open a few restaurants and retire. Instead, they launched a phenomenon and by the late 1970s, there were over 400 Waffle Houses. At the time of their deaths in 2017, the chain had expanded to over 1,500 locations. Despite moving away from everyday operations in the 1970s, they stayed on board for brand management and large events such as Waffle House’s 50th anniversary tour in 2005. Warner said that Rogers “did most of the talking,” while Forkner “did most of the listening,” making a perfect partnership. He adds that everything we love about the franchise today—the open kitchen and friendly relationships amongst staff and customers—was established back at the first restaurant.

Since September 5, 1955, there has always been a Waffle House open somewhere. Waffle House currently operates 1,900 restaurants, and Warner said each has its own personality. It’s a reflection of the community with subtle links to the past. “When people talk about Waffle House, they talk about their experience at Waffle House, about the experience of being with their neighbors or talking to their waitress or their cook,” Warner said. “It’s all about that interaction between the customers and their associates.”

In its 63 years of existence, Waffle House’s menu has rarely evolved. Comfort food is what this eatery does best and what guests have come to expect. “We’ll have people come in and eat the same thing every day,” Warner said. “Every restaurant has those customers they’ll see pulling into the parking lot and they’ll start cooking their meal.”

The most recent change was the introduction of hash brown bowls, which diners were essentially already creating. Earlier this year, a Waffle House kiosk at Suntrust Park vent viral for being the first franchise to sell beer. Aside from that, the franchise is not chasing trends. 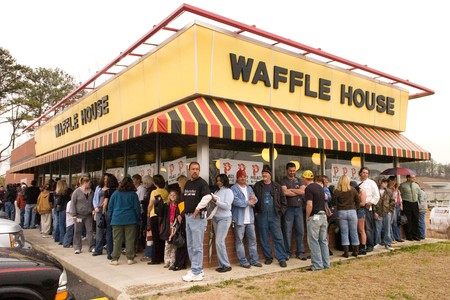 The breakfast spot also is not spreading to New York or California anytime soon. Although Waffle House currently occupies 25 states, Warner said the company focuses on adding restaurants in states where it’s already located. Is national domination Waffle House’s endgame? Perhaps, but for now, Waffle House is keeping things slow. “We have loyal folks out there that want us to expand and we’ll get there eventually, but we’re still growing out of the footprint that we’re in,” he said.

The Avondale Estates location still stands, though it has embraced multiple identities over the years, including a Chinese restaurant for a period. Waffle House reacquired the property in 2004 and in 2008, the building reopened as a museum. Warner called the museum a “step back to the 1950s.” It’s even recognized by the Georgia Historical Society. The museum holds four public open houses a year in addition to private, appointment-only tours on Wednesdays. “People will drive from neighboring states,” Warner said. “It’s not a tour, it’s a pilgrimage.”

On September 8, the Waffle House Museum will celebrate its 10th anniversary. Everyone has a Waffle House story, and hearing tales from customers is what Warner said he enjoys most.

“We are the place where people come to talk about what’s going on in the world,” Warner said. “We’re called ‘America’s Place’ for a reason.”