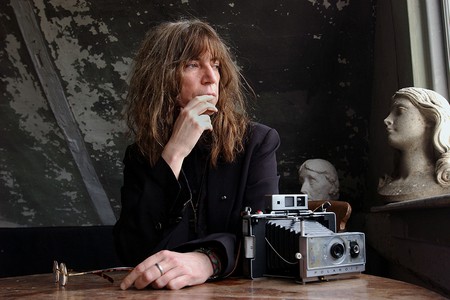 The rock legend has written a moving essay titled ‘My Buddy’ for The New Yorker.

Smith paid tribute to her former partner and collaborator, who died on Sunday at the age of 73 after complications from ALS.

She wrote: ‘We knew each other for such a long time. Our ways could not be defined or dismissed with a few words describing a careless youth. We were friends; good or bad, we were just ourselves. The passing of time did nothing but strengthen that.’

The pair met in the early 1970s, while he was a drummer for a folk band, and ended up collaborating on a play called Cowboy Mouth. Even though he was married to actress O-Lan Johnson at the time, they also embarked on a passionate affair.

Talking about the actor and playwright, Smith spoke about how he liked to travel.

‘He liked packing up and leaving just like that, going west.

‘He liked getting a role that would take him somewhere he really didn’t want to be, but where he would wind up taking in its strangeness; lonely fodder for future work.’

Smith revealed that she found out about his death while she was in Lucerne, Switzerland.

She said: ‘The rain fell, obscuring tears. I knew that I would see Sam again somewhere in the landscape of dream, but at that moment I imagined I was back in Kentucky, with the rolling fields and the creek that widens into a small river.

‘I pictured Sam’s books lining the shelves, his boots lined against the wall, beneath the window where he would watch the horses grazing by the wooden fence. I pictured myself sitting at the kitchen table, reaching for that tattooed hand.’