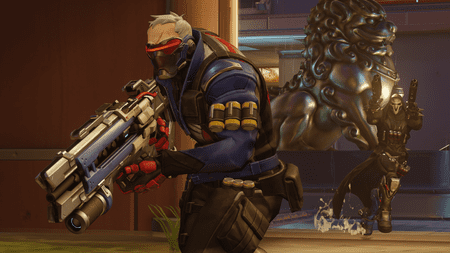 The world of esports is growing exponentially and nobody wants to miss the bus, including influential figures in professional sports. New England Patriots owner Robert Kraft and New York Mets COO Jeff Wilpon are both entering the realm of esports by investing in Overwatch League franchises, Blizzard announced Wednesday.

“We have been exploring the esports market for a number of years and have been waiting for the right opportunity to enter,” said Kraft in a press release. “The incredible global success of Overwatch since its launch, coupled with the League’s meticulous focus on a structure and strategy that clearly represents the future of esports made this the obvious entry point for the Kraft Group.”

“We view our participation in the Overwatch League as a major opportunity to take a lead position where technology is converging with sports and media,” Wilpon said. “This partnership with the Overwatch League and with some of the elite ownership groups in professional sports, offers a unique opportunity to connect with millions of dedicated fans, engaged and passionate about one of the world’s fastest growing sports, and to continue proudly representing New York.”

Blizzard Entertainment, developers and publishers of the multiplayer online first-person shooter game, reportedly sought a $20 million buy-in per team from owners with no revenue sharing until 2021, according to ESPN.

The Overwatch League is taking a pro sports-approach to its structure with the city-based franchises.

There are 148 million “esports enthusiasts” around the world, according to Newzoo, a market research firm specializing in digital gaming. Esports are becoming so popular they will be a medal event at the 2022 Asian Games in China. The NBA is launching a pro esports league — NBA 2K eLeague — and there’s even an esports town being built in China.