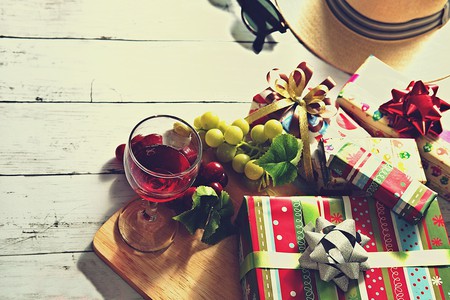 When your friends live and breathe both food and travel, or maybe have a special place in their hearts for a specific city or country (and its cuisine), you’ll get extra bonus points if you reflect that in your holiday gift choice. Here are eight presents sure to please every type of traveler.

We all know that guy. While you can’t summon the Northern Lights on command for him, and no spa visit can quite match the Blue Lagoon, you can bring back flavor memories with a bottle of Brennivin, the distinctively flavored aquavit that’s practically Iceland’s national spirit. Until recently, it was near-impossible to get your hands on one in the States, but distribution is increasing and it can now be found in many places around the country. Though if you want to tell him you had someone smuggle it back in their luggage, we won’t say anything.

Some people follow their gourmet stomachs around the world, securing hard-to-get reservations at prestigious restaurants before even booking their flights. That friend probably sure is excited about the recent redesign of Eleven Madison Park, which currently holds the title of the World’s Best Restaurant. She’ll be psyched that the restaurant’s redesigned porcelain dinnerware is available for sale to the general public for a limited time (warning: setting a table for four will cost about as much as dinner—with good wine—at EMP), so when she’s between fancy meals, she can eat off of the restaurant’s official dishware in her own home.

Bonus: The restaurant’s owners have just published a two-volume, limited edition cookbook, too.

For the friend who dreams of sailing around the world

This bourbon already has. It’s possibly better-traveled than anyone you know. Number 12 in a series that Jefferson’s has sent around the world on a ship, the current release of Jefferson’s Ocean bourbon has crossed the equator four times on its journey, visiting five continents and stopping in more than 30 ports along the way. The project started with just five bourbon barrels on the boat of the company founder’s friend, but now hundreds of barrels have been sent sailing around the world. Not a gimmick, traveling by boat helps the bourbon age “faster,” and differently, than landlocked barrels. As the boat crosses hemispheres, the number of summer-winter transitions that are an essential part of the whiskey-aging process are multiplied, and the sloshing within the wooden barrels as the ship rolls increases the liquid’s exposure to the flavor-imparting charred oak, resulting in a darker color and a caramelly, briny flavor.

Got a friend who follows Distillery Cats on Instagram? Brad Thomas Parsons, who runs the account, has a book out now, profiling the resident cats of some of the best distilleries and breweries all across the U.S. It’s one part Bodega Cats and one part Humans of New York, mixed with a whole bunch of booze. We can’t think of anything more likely to inspire a road trip.

For the friend who returned from Brazil extolling cachaça’s awesomeness

Cachaça is a close cousin of rum, but it’s made with sugarcane rather than molasses. It’s also Brazil’s most popular spirit, by far. For a long time, it had a reputation of being akin to firewater, but these days artisanal distillers are producing high-quality cachaças that are better sipped straight than stirred into a caipirinha. Upscale distillers like Novo Fogo are experimenting with aging their cachaças in different types of native wood; we’re digging the special-release Colibri, which is made in small batches at a certified organic, zero-waste distillery, aged in oak and amburana barrels, and sports notes of tropical fruits and baking spices.

For the friend who returned from Europe full of ~thoughts~ about jamon vs. prosciutto

No matter which one he prefers, there’s good news: The very top producers of each are newly available in the U.S. Cinco Jotas, a premium jamon Iberico producer, can now be found in top restaurants here and also retails at Dean & Deluca, where you can get a shaved portion or an entire shoulder (to really make it a party). Italy’s best-selling brand of prosciutto, Rovagnati, is newly available here as well, at retailers including Dean & Deluca and Eataly. Show up to a holiday party with a sampler platter of fancy cured meats and you’ll look like a hero; put ‘em in a gift basket and it’s a gold-star gift.

For the Francophile with expensive tastes

Celeb chef Alain Ducasse has collaborated with Grey Goose, the premium French vodka company, to create Grey Goose Interpreted by Ducasse. Designed to be served with food, the vodka is made with wheat toasted at different levels to bring out different flavor notes, primarily floral and nutty, with a soft and full mouthfeel. To really wow someone, pick up a tin of French caviar to give along with it.

Italian chef Massimo Bottura had a great cameo in episode 2. It was a pretty good scene, tbh, and surely inspired a great many trips to Modena, the Italian village that’s home to his restaurant, Osteria Francescana. The chef has now published Bread is Gold, with input from dozens of his equally famous chef friends (think René Redzepi, Mario Batali, Enrique Olvera, et al), focusing on low-waste cooking. As gorgeously designed as a coffee table book, with accessible recipes clearly intended to be made and not just intellectually admired, Bread is Gold will be satisfying for passionate cooks and restaurant-lovers alike.