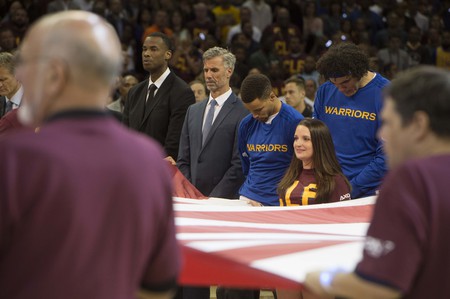 Professional athlete behavior deemed appropriate during the “The Star-Spangled Banner” is at the forefront of a heated debate involving civil rights, social injustices, patriotism, racial equality, and nationalism in the United States. The debate has heightened exponentially following a slew of recent comments by President Donald Trump, criticizing NFL players kneeling and protesting the national anthem.

Former San Francisco 49ers quarterback Colin Kaepernick got the conversation started during the 2016 NFL season by sitting, then kneeling, during the national anthem in protest of civil injustices around the country. Since then, countless other NFL players have made their own gestures—whether it’s kneeling, sitting, locking arms, raising a fist or staying in the tunnel—during the national anthem in a form of protest.

The protests have even begun to occur in other pro sports as Oakland Athletics catcher Bruce Maxwell remained on one knee during the anthem prior to a game on Sept. 23; the first protest of its kind in MLB.

While the majority of the major pro sports leagues in the United States (NFL, MLB, NBA, NHL, MLS) don’t have particular rules regarding player actions during the anthem, tradition has instilled particular actions, typically standing and removing your cap/helmet. Some players put their hand on their heart.

The NBA, though, has a rule that mandates players, coaches and team staff must stand during the playing of the national anthem. According to the league’s rule book, under Section H: Player/Team Conduct and Dress, rule 2 at the bottom of page 61 reads:

While the majority of national anthem protests have stemmed from NFL players, NBA players have been outspoken, particularly on social media, regarding recent comments made by President Trump referring to players who kneel during the anthem as a “son of a bitch” who should be fired.

Golden State Warriors guard Stephen Curry said at the team’s annual media day Sept. 22, that the reigning NBA champions had not decided as a team if they would visit the White House—it’s an American tradition that championship-winning sports teams visit the White House—and said if it were up to him, he would not go.

Trump rescinded his invitation to the Warriors, while singling out Curry, a two-time NBA MVP.

Going to the White House is considered a great honor for a championship team.Stephen Curry is hesitating,therefore invitation is withdrawn!

Curry, who said he awoke Saturday to approximately 20 text messages of support from friends prior to seeing the president’s tweet, called the whole incident “surreal.”

“I don’t know why he feels the need to target certain individuals rather than others,” Curry said at a news conference after the Warriors’ first practice of the season. “I have an idea of why, but it’s kind of beneath the leader of a country to go that route. It’s not what leaders do.”

While NBA Commissioner Adam Silver was in favor of Golden State visiting the White House—citing it as an opportunity to speak with the president face-to-face—he said he was proud of the players for speaking out on critical issues.

“I was in favor of the team visiting the White House and thought it was a rare opportunity for these players to share their views directly with the President,” Silver said in a statement released Sept. 23. “I am disappointed that that will not happen. More importantly, I am proud of our players for taking an active role in their communities and continuing to speak out on critically important issues.”