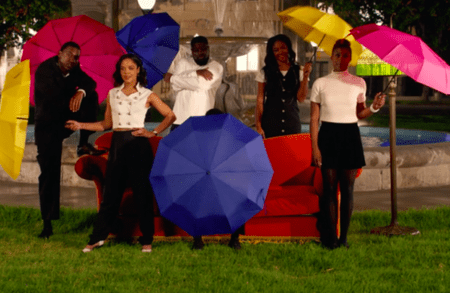 JAY-Z has released his own spoof remake of popular sitcom Friends featuring an all African-American cast.

But the rapper isn’t playing this for laughs – his new video for the track ‘Moonlight’, which you can watch exclusively on Tidal, takes aim at the lack of diversity in Hollywood.

The promo, which was directed by Master Of None co-creator Alan Yang, references the Best Picture error at this year’s Oscars when La La Land was incorrectly announced as the winner instead of the Barry Jenkins’s drama Moonlight.

It starts off with a remake of ‘The One Where No One’s Ready’. Remember? The episode where Ross desperately tries to get the rest of the gang ready for a black tie event at the museum.

But there’s a twist – the actors then take a break from filming, with Carmichael walking up to speak to comedian Hannibal Buress.

Hannibal says: ‘It was terrible, man. It was wack as shit. It was just Seinfeld episodes with black people. Who asked for that?’

He adds: ‘You did a good job of subverting good comedy.

‘You gonna do black Full House next?’

The actor explained the video to Vox: ‘As everyone else gets ready to keep rolling, the video breaks the multi-cam format to focus on Carmichael, looking around the set and hating everything about it.

‘And it’s at this point, as Carmichael walks off the Friends set, that Jay-Z’s Moonlight finally starts playing, his voice breathing that they’re “stuck in La La Land; even when we win, we gon’ lose”.’

JAY-Z also spoke about the clip with iHeart Radio: ‘’The hook is ‘We stuck in La La Land/Even if we win, we gonna lose.’ It’s like a subtle nod to La La Land winning the Oscar, and then having to give it to Moonlight. It’s really a commentary on the culture and where we’re going.’

Could he BE any more cooler?