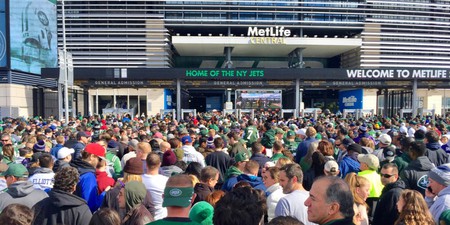 We’ve all been there. Stuck in the midst of an endless horde of zombie-like people slowly shuffling toward security lines and entrances of a venue for a sporting event, concert, or show. Frustration mounts as kickoff or first pitch nears. The national anthem blares over the loudspeakers as you mindlessly inch closer and closer. You’re next in line. Phew, almost there. But the person in front of you forgot to empty his pockets. Beeep! Beeep! Beeeep! He has to go back through the metal detector after placing his keys, phone, and wallet into the small container. You mutter something under your breath at his incompetence. Finally, your turn.

As you later proceed up the escalator to your seats with half the first quarter of the NFL game you braved bone-chilling weather to attend long gone you think, “There’s got to be an easier way.”

Don’t worry, help is on the way. With advancements in technology and security, companies like IDEMIA are developing and implementing faster and safer systems to get patrons inside venues and to their seats more efficiently.

“We’ve put together a program that would utilize biometric technology, the same technology we’ve used with TSA Pre✓ and the U.S. Department of State,” said Charles R. Carroll, senior vice president of identity services at IDEMIA. “We create an expedited line people can go through relatively quickly. It’s all the same screening as everyone else, but a designated line with less people in it.”

Similar to TSA Pre✓ at airports, these security lines will only streamline entrance to venues and arenas around the country. IDEMIA has already partnered its IdentoGO services with the New York Jets and San Francisco 49ers and is looking to expand to other teams and venues across the United States.

The first phase, according to Carroll, is implementing the security systems at these various venues followed by the creation of an ecosystem for the “trusted fan.” Registration will lead to more efficient access to any and all venues with IdentoGO, and, in the future, even have your credit card tied into your ID number or facial recognition, so buying concessions is faster and less of a hassle.

The entire process won’t just benefit fans, though. Organizations and venues will get to know their clientele better for commercial purposes as well as collect more detailed data to be used for safety and security, which is a major concern, especially following recent terror attacks at concerts in Manchester and Las Vegas, and an endless amount of fan violence at NFL games and European soccer matches.

“We’ve approached different teams and venues asking what their issues and priorities were,” Carroll said. “Across the board almost every organization, whether it was a music promoter or sporting event, all said the top three were: to increase the fan experience, make it safe and secure, and they want to move 30,000 people into a venue the last 30 minutes before an event starts as people tend to come in last minute. And they want to use our technology to do that.”

IdentoGO is a completely voluntary service. Those interested would have to provide similar information that is required for TSA Pre✓, which would include personal information, finger and facial biometrics, as well as permit a background check.

“If you feel uncomfortable and don’t want to give up that information, you don’t have to,” Carroll said. “You can stand in the longer lines in more crowded areas. It’s totally up to you. Are you willing to give up this information to gain a convenience?

“We’re trying to make this a program with high levels of integrity. My job is to protect people’s information. We have an information assurance team that is second to none.”