How Hair Removal Became a Gendered Practice in the U.S. 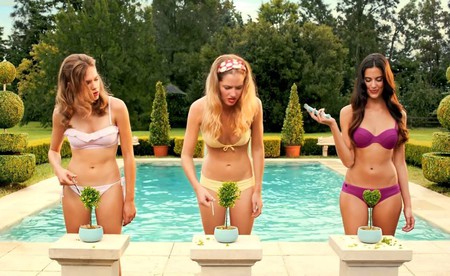 From shaving and waxing to x-rays and chemical depilatories, America has a complex history with hair removal methods and how they are gendered.

The zoomed images of Roberts’ body hair provided verifiable tabloid bait for nearly a decade. And what was once labeled as audacious for a woman of such status and influence to avoid shaving her pits soon became a symbol of new-wave feminism. Roberts was suddenly in good company (if you consider Miley Cyrus’s Instagram presence to be that). Celebrities and public figures with feminine bodies showcasing their un-groomed body hair—even dyeing it in neon colors for the Instagram world to see—are now admired for their “bold” choice to keep their hair in lieu of going bare.

But in 2018, women keeping their body hair is only considered bold because of a systematic demand for feminine bodies to be bald everywhere below the eyebrows. This deeply ingrained practice predates any social or fashion statements in American society. Between shaving, waxing, tweezing, threading, lasering, Nair-ing, and a whole slew of tear-inducing hair removal methods (shoutout to the Epilady), the practice of hair removal in the U.S. is inherently a gendered one. Here’s a breakdown of how each hair remover paved the way to make hairless skin a gendered practice in the U.S.

From buffing to shaving

Though modern interpretations of cavemen don’t show any signs of grooming, archaeologists attribute the earliest instances of hair removal to the Stone Age, where they used literal stones to scrape all hair from the face and head as a method of protection during combat. Initially, this wasn’t a gendered practice—but it did translate over centuries to the ancient Grecians and Romans. For them, women with excess body hair were uncivilized and unclean, and the hair was reportedly removed with serrated stones.

These norms that predated American culture altogether took form in the U.S. in 1915 when Harper’s Bazaar featured an advertisement for Gilette’s first “razor for women,” Milady Decollete. Combined with the first women’s clothing trends showing more skin, advertisements boasted a “smooth underarm” as one of the first outwardly gendered instances of hair removal. By the 1940s, 56% of all Harper’s Bazaar ads were about removing leg hair. Eventually, leg hair became bikini lines, and shaven hair would eventually become a standard of femininity in the U.S. Today, women in the U.S. are estimated to spend $1 billion on razors each year, and women who shave regularly will spend an average of $10,000 on razors in their lifetimes.

From chemical depilatories to waxing

Although the first instances of waxing can be traced to Ancient Egyptians—who removed all hair except the eyebrows—the growing American obsession with hair removal called for longer-term solutions in the early 20th century. Hair removal products and advertisements took up prime real estate in popular women’s magazines, but the costs of proper waxing and other treatments were too high for the masses. At-home solutions included modified shoemaker’s waxes to sugar-paste solutions, while local pharmacies attempted to make cheaper depilatory creams.

Waxing and chemical depilatories reached new heights in popularity after Delatone, a hair removal powder and cream, warned consumers that America “May Become A Nation Of Bearded Women.” The nation-wide hysteria made room for the industry of now-popularized hair removal brands, like Nair, Veet, and Sally Hansen. Combined with the constantly growing salon industry, U.S. hair removal is a multi-billion dollar industry that is entirely geared toward femininity. 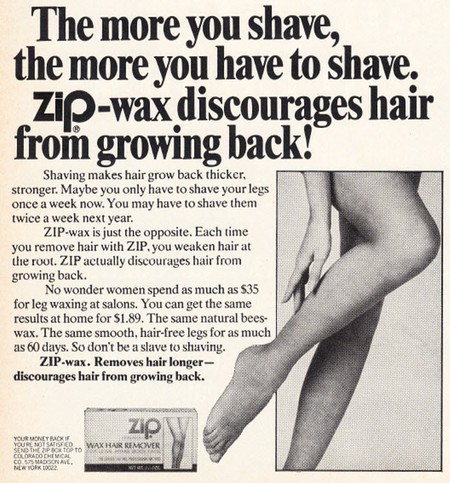 From waxing to Brazilian waxing

The linchpin of feminine hair removal in the U.S. comes down to one specific area: the pubic region. While Renaissance sculptors and artists are often credited with glorifying a lack of genital hair when depicting feminine bodies, vaginal hair removal didn’t materialize as a practice until the 1950s, with the debut of Playboy and its hairless centerfolds with groomed pubic regions. This was the first time American culture glorified this specific type of hair removal for women. And, since there were a lack of safeguards and refinements for this practice, many women who waxed or shaved suffered from follicle infections. But it wasn’t until the 1990s when some hair turned into no hair down there.

In the immortal words of Carrie Bradshaw, “I got mugged.” The Sex and the City scene where Bradshaw unwittingly undergoes a Brazilian wax signaled the trending era of removing all pubic hair. Despite its name, the Brazilian wax originated in New York—not Brazil—and was established by a family of salon-owners called the “J Sisters” (who are third-generation Brazilian). The salon industry, which boasts the highest charges for a full Brazilian wax, is still growing in revenue today. In a 2016 study, 84% of women reported grooming their pubic hair, with 62% citing Brazilian waxing as their preferred grooming choice. But historically, waxing is not the most painful or even the most dangerous hair removal procedure. 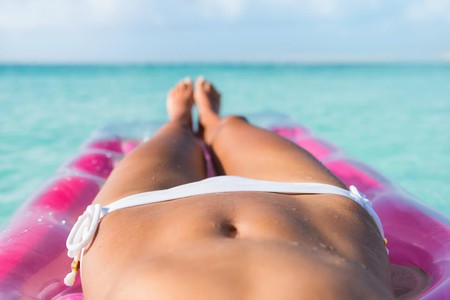 From x-rays to lasers

The flourishing obsession over women’s body hair in the ’20s and ’30s presented one definitive obstacle: permanent treatment. When experimental x-ray treatments emerged, the war on body hair took its toll on women, who were treated with consistent bursts of radiation to melt body hair. This caused scarring, ulceration, cancer, and eventually, death. But nevertheless, the pressure to remove body hair to appear feminine persisted—hemlines grew shorter, stockings ran in short supply, and in the 1960s, electrolysis and laser hair removal became solutions for permanent hair removal.

Electrolysis, the practice of frying hairs one by one to remove the follicle, is still commonly used and targeted toward women for facial and underarm hair. Meanwhile, laser therapy reached its height in popularity in the 1990s, but came with a series of hoops, including consistent shaving, limited sun exposure, and treating frequent and painful burns. It’s also one of the only hair removal practices that targets women’s skin color, making it nearly ineffective for people of color. 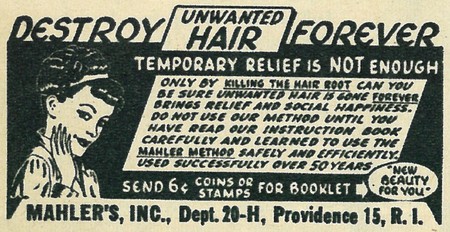 According to Rebecca Herzig, author of Plucked: A History of Hair Removal, its remarkable how quickly Americans deemed body hair disgusting for women. It became a class divide, given the excess costs and pain taken by those who could afford hair removal methods.

And, eventually, it became an unattainable form of societal control of women in the U.S. Hair removal is a growing, multi-billion dollar industry that is laser-focused (no pun intended) on America women. They created a feminine standard, a norm, which Herzig believes is to “produce feelings of inadequacy and vulnerability, the sense that women’s bodies are problematic the way they naturally are.”

Please check out our brand new #freeyourpits DIY video, where I dye my pits for the first time ever. Link in profile! #feminism #bodypositivity http://www.howtohairgirl.com/2015/05/free-your-pits-updatediy-video/

But in 2018, hair removal is still a choice across all genders in the U.S. And, gendered agendas aside, genital hair removal is proven to help combat pubic lice and crabs. But these grooming methods shouldn’t be part of any agenda today. When women are publicly taking a stand against body hair shaming, their reverence in tabloids is still treating them as defiant, not as normal.

So the next time a feminine person walks a red carpet with hairy pits or a full bush, let’s celebrate the fact that they didn’t get each of those hairs zapped, tweezed, waxed, or shaved by not photographing them or saying anything about it at all. Because, ultimately, their hair is their choice.