How Althea Gibson Took on Tennis and its Elitism

Growing up in the turbulent USA of the 1930s and 40s as a black female, decades before the civil rights movement took sway, was at best prohibitive, and more realistically, utterly xenophobic. And yet, despite the circumstances forced upon her, Althea Gibson went on to achieve things no one before her had ever done and was a pioneer in every sense.

Born in South Carolina in 1927, Gibson’s family did what many in the southern states did at the time and headed to the north. The Gibsons moved to New York, and specifically Harlem, where a young Althea found tennis and fell in love with it. It came via table tennis, with Gibson playing it regularly, eventually getting noticed and being invited to play on the Harlem River Tennis Courts in 1941. Within a matter of months she was winning tournaments.

Gibson was awarded a scholarship at Florida A&M University a year before becoming the first African-American player to compete at Wimbledon. Despite having Grand Slam appearances on her CV, many tournaments still banned her (or any other black player, for that matter) from playing. The sport was still very much a segregated environment, like so many other aspects of the United States.

She was tall (nearly six foot), powerful and athletic. By 1955 she was one of the country’s best players and managed to secure sponsorship from the United States Lawn Tennis Association. A year later she picked up her first Grand Slam titles, winning the ladies singles and doubles title in Paris. In 1957 she won singles titles at Wimbledon and at the US Open, and reached the final of the Australian Open. The following year she retained both titles. In total, Gibson ended up winning 11 Grand Slam titles (in singles and doubles).

It’s important to state the elitism of the sports that Gibson excelled in. This is not to belittle the achievements of black, or female, athletes in other sports, but tennis and golf, even still to this day, have issues regarding class, inclusion and prejudice. Black athletes are far more accepted in football, basketball and soccer, away from private clubs and prohibitive membership fees. There are still golf clubs today that don’t allow women to be members.

Nearly 100 years ago tennis instigated the four Grand Slams, more or less as we know them now. Since then, only two black men have won a Grand Slam singles title; Arthur Ashe, who won a US Open and Australian Open, and Yannick Noah, who won the French in 1983. In the women’s game it is a similar story, with the Williams sisters and Sloane Stephens being the only singles titles winners since Gibson. Their dominance disguises the fact that black women are supremely under represented across the sport. It’s similar to Tiger Woods’ era of success in golf – take his achievements away and black success in the sport is nearly non-existent. 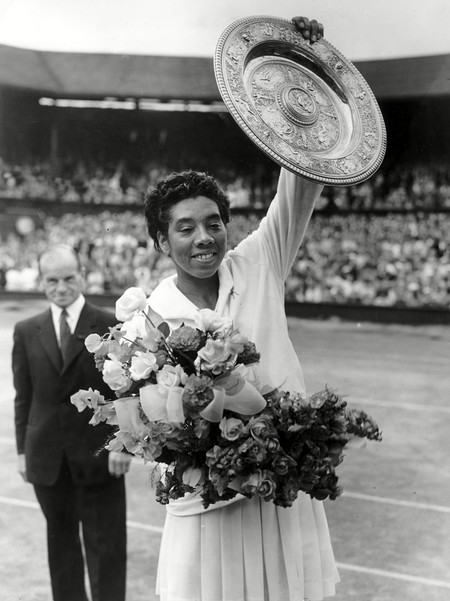 When Gibson took up golf she became the first black woman to compete on the pro tour. She returned to tennis at the start of the Open era, but retired soon after. After her playing career was over she was inducted into the International Tennis Hall of Fame as well as serving as Commissioner of Athletics for New Jersey State for a decade.

Gibson’s success was no fluke, no flash in the pan. She often won tournaments, some of the biggest going, and followed them up by defending her title the following year. She was a genuine, bonafide game-changer who took on all the criticism and prejudice that came her way. Later this year, the United States Tennis Association, the same organisation that banned Gibson from tournaments and from playing against white people, will right some wrongs with a statue of Gibson at the Billie Jean King National Tennis Center, home of the U.S. Open.