Go Guarded Is a Self-Defense Weapon for Female Runners 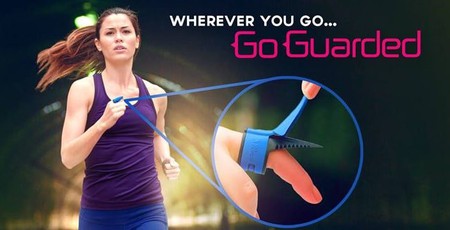 Running, for many, is an escape. It’s a breath of fresh air in a busy life: work, social obligations, family responsibilities, bills, groceries, laundry.

Yet, while hitting the trail or pavement for a few miles is supposed to be a positive experience on multiple levels, there is always a chance it can be anything but.

Female runners, especially those running alone, can face a litany of harassment from inappropriate comments or whistling to physical attacks or threats. Three years ago, Jodi Fisher inadvertently took a wrong turn, ending up in a secluded part of a Tucson, Arizona, park while the sun was setting.

“While everything turned out fine and no creepy clown popped out from behind a tree or anything, I was bothered by how vulnerable and defenseless I felt in that situation,” Fisher said.

After researching self-defense options for runners and not finding any good options, Fisher, who has been involved in the criminal justice system for 20 years, developed her own: Go Guarded.

Go Guarded is a heavy-duty plastic serrated-edge weapon worn on any finger that is safe enough to wear while running, yet can fend off a would-be attacker should any situation arise. Unlike pepper spray, a popular self-defense tool used by runners, Go Guarded doesn’t have to be retrieved from a belt or holster, it won’t be affected by which way the wind is blowing, and cannot be knocked out of your hand.

While there are no specific statistics regarding running safety and attacks, threats still exist, especially among female runners.

“It is not my intent to incite a culture of fear for women, but the sad truth is horrible things do happen, and I truly believe we need to take whatever steps possible to keep ourselves safe,” Fisher said.