Fergie Tried to 'Sex Up' the US National Anthem and It Was Really, Really Bad 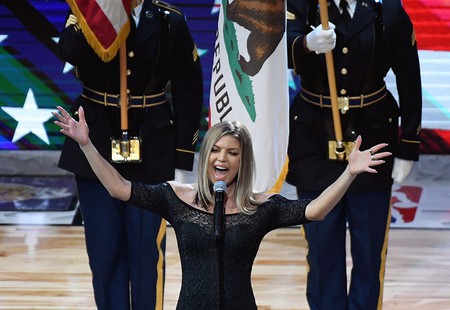 You can’t blame a singer for trying to put their own spin on an old classic.

But when it comes to the US national anthem, it’s probably better to play it straight, as Black Eyed Peas star Fergie found out this weekend.

The singer tried to sex up ‘The Star-Spangled Banner’ at the NBA All-Star Game and the reaction was not good.

Chance the Rapper, Jimmy Kimmel and several NBA players were caught on camera giggling at her performance.

Just watching all the players’ reactions to Fergie has me dying 💀 pic.twitter.com/1887xdKW2M

TV viewers weren’t impressed either claiming it was ‘horrifying’ as Fergie tried to come over all seductive and ended up more ear-screeching.

Fergie’s rendition of The Star Spangled Banner at the NBA All-Star game just beat out “nails on a chalkboard” as the most horrifying sound in the world. pic.twitter.com/r4fBCJpsFC

Swear to god my wife just played @Fergie‘s rendition of the #AllStarGame2018 #nationalanthem and the dog howled along, but, like angrily. Like it hurt her ears.

Yo @Fergie you destroyed the anthem…. @chancetherapper even laughed at you 😂 so did @jimmykimmel and the rest of the all-stars

Me: how bad could fergie’s National Anthem possibly be?
*Watches it* pic.twitter.com/UqNr4YqCD2

Many compared it to Roseanne Barr’s rendition at the San Diego Padres baseball game in 1990, which was intentionally bad.