Everything You Need To Know About Disney Parks Across The World 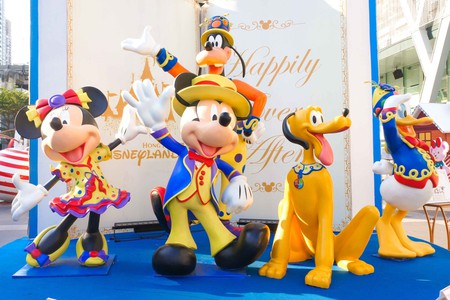 ‘To all that come to this happy place: welcome. Disneyland is your land. Here age relives fond memories of the past, and here youth may savor the challenge and promise of the future.’ Walt Disney

Whether you are an eternal romantic, or still feel the child inside of you, or if you just want to spend some time in a theme park surrounded by your favorite cartoon heroes, Disneyland is the place to be. 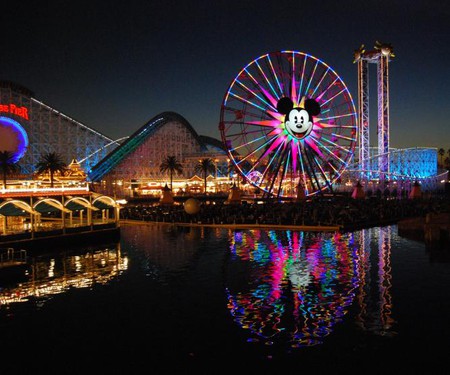 There are five Disneyland parks across the world. The first one was established in Anaheim, California, on July 18, 1955. It was followed by Disney World in Bay Lake, Orlando, on October 1, 1971. The Tokyo Disney Resort came next; it was the first park built outside the United States and opened in Urayusa, Japan, on April 15, 1983.

The only European Disneyland was launched in Marne-la-Vale, Paris, on April 12, 1992, and the newest resort opened its gates to the public on September 12, 2005, located on Penny’s Bay, Lantau Island. Disney World, the largest in size, is five times bigger than the original Anaheim location and contains Walt Disney’s personal favorite park: the Epcot.

Once you’ve arrived at any of the parks, you’ve entered Walt Disney’s world, so expect castles, labyrinths, pirates, ghosts, and witches. Not only that, but some of the best, most thrilling rides in the world are found at Disney parks.

For those who enjoy the arts, there are also many options – from experiencing the craft and animation techniques of Disney artists to stage shows with special effects and interactive performances. And of course what would a Disney park would be without fairy tales? In each location, you will find the stories of Pinocchio, Winnie the Pooh, and Snow White, Alice’s Wonderland Labyrinth, and Peter Pan’s journey to Neverland.

What is the most characteristic image in all of Disneyland (other from the Mickey-inspired mouse ears, of course)? Undeniably, it’s the castle of beautiful princesses like Sleeping Beauty or Cinderella. Not many know this, but each castle is unique and belongs to a different princess. In Anaheim, Hong Kong, and Paris you can find three different versions of Sleeping Beauty’s castle, whereas Cinderella’s castle is in Orlando and Tokyo. The life-sized castles have been created with precise details and stand in the center of the Magic Kingdom. They are featured in every visitor’s photo and act as the main stage for the spectacular fireworks that end each show.

Parades are also a vital part of the Disney magic and take place in all parks; colorful carriages, cartoon heroes, dancers, and special effects fill the streets and spread joy and laughter to the visitors. Restaurants are also essential to recharge guest’s batteries after many hours of excitement and walking. From burgers to gourmet recipes, there are restaurants to fulfill every taste. So wear your comfy shoes, pack your excitement, and get ready for a magical journey with the Culture Trip’s guide to the best each park has to offer. 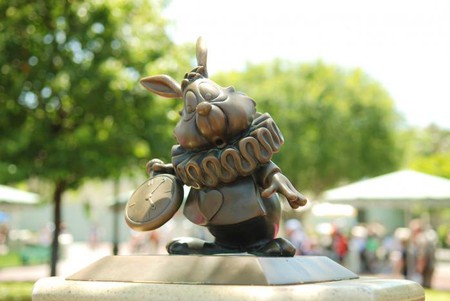 The very first Disneyland covers 85 acres and is filled with everything people around the world love about Disney. It is divided into eight distinct areas, and there’s good reason to visit each and every one of them.

Critter Country: Get ready to get wet and meet the Indians in their canoes. Don’t Miss – Splash Mountain

Fantasyland: This is where all the fairy tales come to life. Meet famous Disney characters such as Snow White and the Seven Dwarfs, Mickey Mouse, Donald, Pluto, and so on. Encounter castles, labyrinths, Geppetto’s workshop, and the Seven Dwarfs’ cottage. Don’t Miss – It’s a Small World

Main Street USA: Built to recall the 19th century small towns of America, this area is full of shops and memorabilia.

Mickey’s Toontown: Find out all about Mickey Mouse. Don’t Miss – Mickey’s House (where you can get a photo with Disney’s most famous character)

Tomorrowland: Choose from plunging deep into the South Pacific for a submarine voyage to find Nemo, experience a 3-D motion simulation of space travel, or go on an expedition fighting aliens. Don’t Miss – Buzz Lightyear Astro Blasters and Space Mountain

Downtown Disney: End your day with a stop in Disney’s premier shopping and dining area. 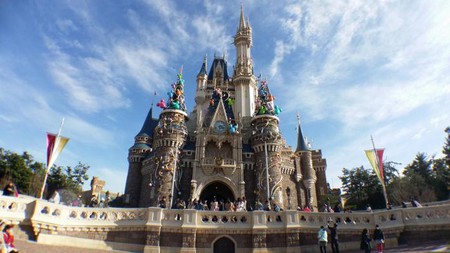 Tokyo Disneyland comprises seven separate lands, and its rides tend to be faster and more adult-oriented, whereas Disney Sea – inspired by the myths and legends of the sea – is made up of seven themed ports of call.

Fantasyland: Follow the adventures of Pinocchio, Peter Pan, and Snow White and dare to enter the Haunted Mansion

World Bazaar: Discover a variety of restaurants and shops in buildings that resemble those of a small American town in the early 1900s.

Tomorrowland: Offers adventures like rocketing through the galaxy, touring the stars… basically the combination of science and imagination. Don’t Miss – Star Wars: The Adventure Continues. 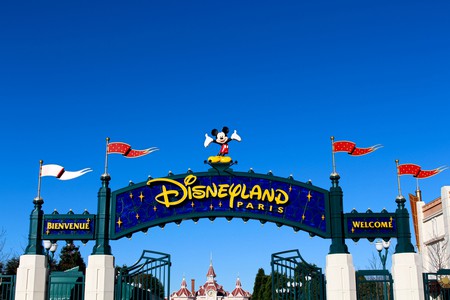 The main Disneyland park is divided into five different lands, whereas the second park – Walt Disney Studios Park – revolves around a movie theme. Disneyland Paris is purportedly the most popular tourist destination in all of Europe.

Adventureland: A pirate ship, a treehouse, a steamboat, and a scary cave make Adventureland the ideal starting point of your exploration. Don’t Miss – Pirates of the Caribbean

Fantasyland: Explore Sleeping Beauty’s castle and try to pull Excalibur free from the stone. Why not jump onto the carousel before getting lost in Alice’s labyrinth? Don’t Miss – Peter Pan’s Flight

Frontierland: In the landscape of the Old West, jump into one of the steam-powered riverboats – The Molly Brown and The Mark Twain – for a ride. Don’t Miss – Big Thunder Mountain and Phantom Manor

Main Street USA: Enter Main Street, and you will be amazed by the delicate buildings, the railroad station, and City Hall, all of which resemble the America of the early 20th century and provide the ideal place for a quick snack or some shopping.

Hong Kong Disneyland debuted in 2005. It contains just one theme park, and it is the smallest Disneyland of all. Some Chinese elements can be found here, like the Plaza Inn – the first Chinese restaurant in Main Street, with 19th century Chinese table service.

Main Street USA: Highlights include the vintage cars, Disney characters come to life, and the parade in which the characters – Mickey, Cinderella, Ariel the Mermaid, and others – perform.

Fantasyland: The most popular rides include the Many Adventures of Winnie the Pooh and the majestic flight over the Magic Kingdom with Dumbo the little elephant. Don’t Miss – Mickey’s Philharmagic

Toy Story Land: Meet the heroes of the Toy Story movies, as Andy’s toys welcome you to their yard. Woody, Buzz, Jessie, Rex, Bullseye, Hamm, Slinky, and Mr. and Mrs. Potato Head await you for with some exciting rides. Don’t Miss – PC Racer 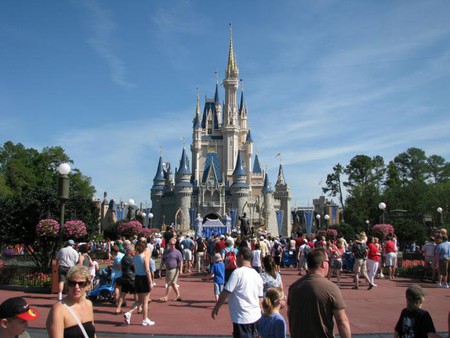 Walt Disney World covers 25,000 acres around Orlando and is twice the size of Manhattan. There are four separate theme parks, two water parks, and numerous shopping and dining options, as well as sports facilities, making it the most-visited vacation resort in the world.

Adventureland: Climb a tree, explore the jungle, go sailing, fly over the desert, and even visit a tropical island. Don’t Miss – Pirates of the Caribbean Jungle Cruise

Fantasyland: Ride the classics: It’s a Small World, Peter Pan’s Flight, The Many Adventures of Winnie the Pooh, The Mad Tea Party, and experience Mickey’s Philharmagic. Don’t Miss – Under the Sea: Journey of the Little Mermaid

Liberty Square: Step into America’s colonial era. There’s an actual Liberty Tree named from the 1957 Disney movie Johnny Tremain, and among its branches are 13 lanterns representing the original 13 colonies of the United States. Don’t Miss – The Haunted Mansion

Main Street USA: Travel along on a horse drawn trolley, jitney, or a horseless carriage.

Tomorrowland: Inspired by science fictions writers of the ’20s, Tomorrowland calls for travel into the ‘future that never was,’ full of neon lights, spacecraft, and references to the Star Wars movies. Don’t Miss – Space Mountain, Buzz Lightyear’s Space Ranger Spin, and Star Wars: The Adventure Continues

Epcot: Experimental Prototype Community of Tomorrow opened on October 1, 1982, and covers about 300 acres. It was built to celebrate the sciences, technology, and the many different cultures from around the world. Epcot is divided into Future World and World Showcase. You will encounter pavilions representing nations from around the globe, as well as attractions situated around a beautiful reflective lagoon. Don’t Miss – Soarin’

Disney’s Hollywood Studios: Experience life behind-the-scenes of Hollywood movies, along with various thrilling attractions and backstage events. Aspire to be a singer? Try your luck on the Disney’s version of American Idol. Don’t Miss – The Twilight Zone Tower of Terror and the Rock ‘n Roller Coaster, featuring the music of Aerosmith

Disney’s Animal Kingdom: Much more than a zoo, this is the largest animal-themed park in the world, scattered over 500 acres of flourishing landscape with more than 1,700 animal inhabitants. Don’t Miss – Expedition Everest

Disney’s Typhoon Lagoon and Disney’s Blizzard Beach: Thrilling water slides, twisting tides, roaring rapids, and relaxing rivers are on offer in these two areas. You can also dive into a cave or go snorkeling among live sharks and other tropical fish. Don’t Miss – Crush ‘n’ Gusher and Summit Plummet
By Mary Papageorgiou