Eerie Cemeteries in the United States and Where to Find Them 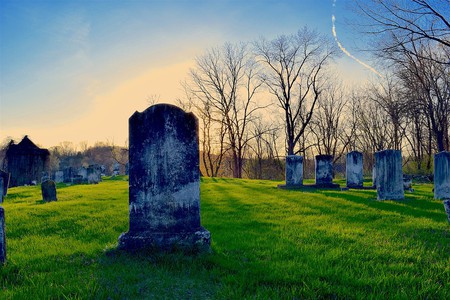 There is a stigma associated with cemeteries that make them creepy to most people. But if you’re into ghost-hunting or visiting old graveyards, these burial grounds are some of the eeriest in the United States and will give you goosebumps.

One of the most evil graveyards in the country is Stull Cemetery in Kansas. For more than a century, there have been stories about Stull Cemetery involving witchcraft and satanic cults, and one of those stories claims that the Devil himself once used the church at the center of the cemetery as a gateway to hell. He would, according to legend, pass through the gateway twice a year—at midnight on the Spring Equinox and Halloween. The church no longer stands, but hundreds of eyewitnesses have said it would stay bone dry, even in wet weather conditions; this is what ultimately led the town to tear down the church, which made the spirits angry. Even Pope John Paul II, while he was flying to Colorado in 1993, forced his private plane to re-route his flight around the cemetery because the grounds, as well as the air above, were tainted by evil. 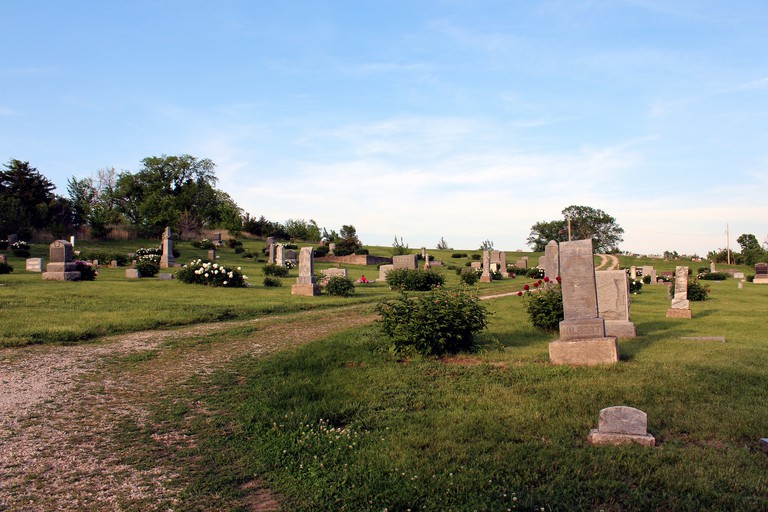 The land surrounding the small abandoned Bachelor’s Grove Cemetery outside of Chicago was originally settled by English homesteaders. Its original name was the Everdon Cemetery, named after the original property owner, Samuel Everdon. There have been several reports of supernatural activity at Bachelor’s Grove, including floating orbs or light, a two-headed ghost, a “white lady” carrying an infant (there is a grave at the cemetery belonging to an infant girl), and phantom cars. Claims of these sightings peaked during the 1970s and 1980s, which is when several paranormal researchers conducted a series of experiments at the cemetery. Findings by the Ghost Research Society included images that contained light resembling ectoplasm, and other researchers have reported electronic voice phenomena in the graveyard.

Tucked away behind St. Paul’s Episcopal Church in Key West is the cemetery of the same name. The widow of John Fleming, who was one of the original owners of the island of Key West, donated the land for the cemetery in 1832, but she had one request, which was that her husband’s remains never be removed. Due to supernatural phenomena that have occurred over the years, there has been speculation that Mr. Fleming’s grave was disturbed by church reconstructions that took place. Some believe that a man who appears in 19th-century clothing at the graveyard may actually be the spirit of Fleming. Others have noted a spirit, resembling a sea captain, who enjoys frightening visitors, as well as several children who gather near the angel statue. These kids apparently died in a fire started by the pastor when he discovered his wife was having an affair with the deacon.

Located east of Savannah, Georgia, is the Bonaventure Cemetery. It was made famous after being featured in the 1997 Clint Eastwood-directed movie, Midnight in the Garden of Good and Evil, based on the book by John Berendt. Most people who visit the cemetery seek out one particular headstone—that of Gracie Watson, also known as “Little Gracie.” In 1889, she died of pneumonia at the age of six, and her parents, Wales and Margaret, were devastated. Margaret claimed she could still hear Gracie laughing and playing at their residence, so she and Wales moved into the DeSoto Hotel. However, over the years, staff members of the hotel said they could hear Gracie’s voice, and some refused to go into the basement because of a clanking metal sound. At Bonaventure Cemetery, a statue stands in Little Gracie’s honor, surrounded by an iron fence. Some visitors claim that they’ve seen blood-like tears running down the statue’s face, especially when someone removes toys or gifts that were left by visitors. 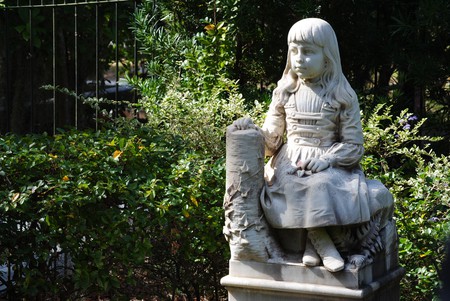 The historic Green Mount Cemetery in Baltimore, Maryland, was dedicated on July 13, 1839. It is the resting place of many prominent historical figures, including John Wilkes Booth, the man who conspired to assassinate President Abraham Lincoln. Many visitors leave pennies on his grave, with Lincoln’s face up, as a way to give Lincoln “the last word.” While there haven’t been many stories about ghost sightings or other paranormal activity, there has been eerie speculation surrounding the grave of John Wilkes Booth. Because of his notorious reputation, his family thought that giving him an elaborate headstone would attract unwanted attention, and visitors believe that a small, unmarked headstone is that of Booth, whose family is also buried in the same plot. 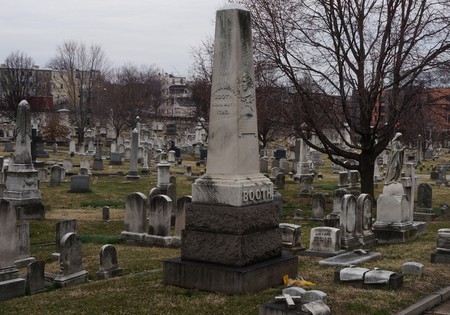 Dating back to the 1700s, Union Cemetery in Easton, Connecticut, is one of the most haunted cemeteries in the U.S. It sits beside the Easton Baptist Church near the intersection of Routes 59 and 136. Demonologists Ed and Lorraine Warren wrote a book about Union Cemetery, titled Graveyard, and Ed even claims that he has a video of the “White Lady” ghost who is said to haunt the cemetery. Dozens of people have even stated that they have seen her and describe her as wearing a white nightgown or wedding dress. The story of her death has several versions, with one account saying she was buried after she died during childbirth. Others speculate she was murdered and her body thrown down a sinkhole behind the church, or that her husband killed her. 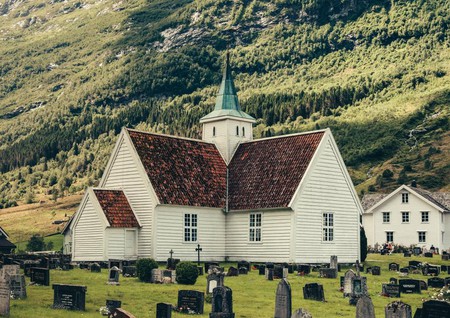 Now a graveyard, Westminster Hall and Burial Ground was once Westminster Presbyterian Church. Iconic author Edgar Allan Poe is among the notable figures buried at Westminster Hall, with many people believing that his spirit lingers among the graves. He died unexpectedly, and to this day, his death is still a mystery. What is possibly the most disturbing tale about this cemetery, though, is that of the “Skull of Cambridge,” rumored to be the head of a minister who was murdered by decapitation; some people say that the skull would scream continuously, day and night. Legend has it that several people even ended up in psychiatric wards after hearing the screaming skull because they began to go insane.

Also known as the Iowa Men’s Reformatory Cemetery, the Anamosa State Penitentiary Cemetery lies west of Anamosa, Iowa. The original cemetery held the bodies of prisoners who were left unclaimed or had no families to give them a proper burial; they were buried in graves that contained up to eight bodies. When the current cemetery was established in 1914, those graves were moved, along with the subsequent graves that held individual bodies. There are three styles of limestone markers used at Anamosa Cemetery: upright stones, with either a triangular top or a rounded top, and a flat, horizontal marker that is still in use today. 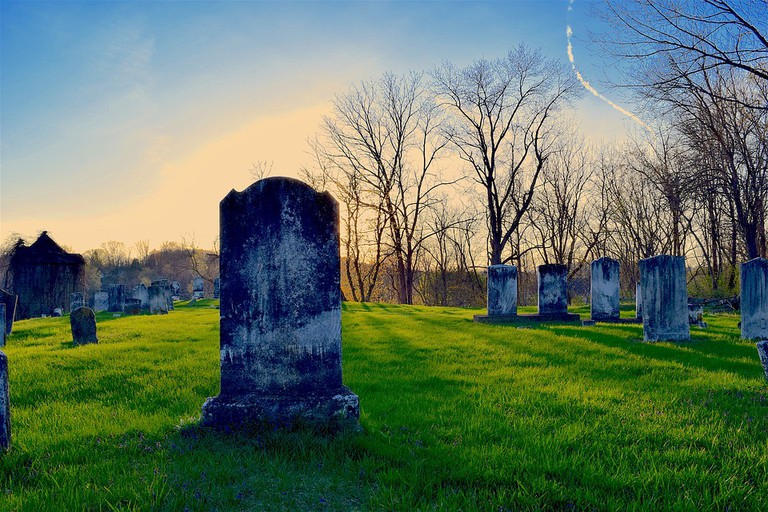 When Giles Corey refused to stand trial during the Salem Witch Trials in 1692, he was crushed to death in an alley beside Howard Street Cemetery. After being stripped naked, the sheriff placed a heavy board on Corey’s chest and piled rocks on top of it to try and make him admit that he practiced witchcraft, but he didn’t. Instead, he put a curse on the town and all of the subsequent sheriffs who worked in Salem. After being tortured for days, Giles Corey died on September 29, 1692. Today, many people claim to see his ghost floating through the cemetery. The memorial marker for Giles Corey stands at the Salem Witch Trials Memorial in Salem, Massachusetts.

In a pit on the edge of this graveyard next to the Old Salem Jail, Giles Corey was tortured in the name of religion. He was being slowly crushed to death by the weight of heavy stones, and when asked for a confession to witchcraft all he muttered was "more weight". After two days the life was pressed out of him on September 19, 1692 after being neither tried nor convicted. #salem #ma #massachusetts #baystate #essexcounty #massachusettshistory #colonialhistory #colonial #salemwitchtrials #witchhunt #howardstreetcemetery #oldsalemjail #salemjail #innocent #ushistory #americanhistory #graveyard #cemetery #burialground

The Sumner Knight Chapel sits within the Woodland Cemetery in Keen, New Hampshire. The chapel supposedly has a ghost in the form of a giggling little girl who peeks behind tombstones and trees. Legend says that there is also an unhappy spirit that lives in the chapel, and if you curse near it, you will taste soap in your mouth; the disciplinarian spirit objects to cursing and punishes people with the soapy sensation.

During the 19th century, Idaho City was a mining town, and when gold was discovered in 1862, people starting flocking to the city. Laws weren’t strict; whiskey was cheap; diseases were rampant; people tried solving problems with gun fights. The city also suffered several fires that destroyed about 80% of the town. Many people died in Idaho City because of these circumstances, and Boot Hill Cemetery is the final resting place of nearly 2,000 of those people. Today, only about 300 marked graves remain. Residents and visitors have spoken of apparitions that appear after the sun goes down; they are said to be the spirits of those who died during the gold rush. 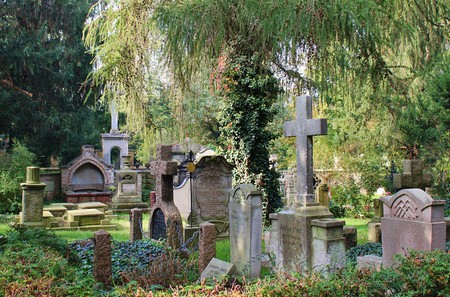 gravestones in cemetery / (c) Pixabay
Give us feedback