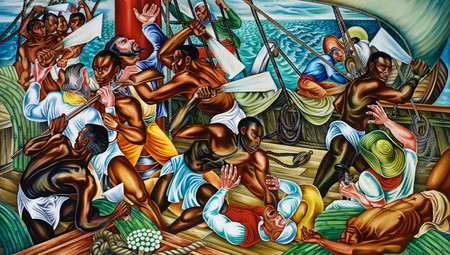 A Paris-trained artist best known for large-scale murals, Hale Woodruff was one of the most influential African-American artists of the twentieth century. His work reflects the African-American struggle and experience in bold, vivid color. Learn more about Woodruff’s role in the American arts and history.

Some works of art transcend the name of the person who created them. If, by chance, you happen to know the name Hale Woodruff, it is almost inevitably in connection with one very specific work: The Amistad Murals.

Woodruff was born in 1900 in Cairo, Illinois, although he grew up mostly in Nashville, Tennessee. The African-American artist attended segregated schools for most of his life until 1926 when he won an award from the Harmon Foundation, which enabled him to spend four years studying art in Paris at the Academie Scandinave and the Academie Moderne. A few years later, he would move to Mexico to study under Diego Rivera, where he learned how to paint frescos and how to portray figures in Rivera’s signature style.

Before long, Woodruff’s work became deeply political. He started painting scenes rooted in the American Great Depression. He won a commission at Talladega College in Alabama, which would become his most famous work.

The three-paneled mural for the college’s Savery Library was based on the 19th-century slave revolt aboard the Amistad ship. The three parts of The Amistad Murals — painted between 1938 and 1942 — are entitled The Revolt, The Court Scene and Back to Africa. There are three other murals he painted for the library outside of the Amistad series: the Underground Railroad; the first day of college registration for freed black men at the college; and one of the library building itself. At six feet tall, the murals are awe-inspiring. Some span 10 feet across and others are 20 feet wide.

In 1942, Woodruff founded the Exhibition for African American artists, one of the only spaces where African-American artists could exhibit their work. A few years later, he became a teacher at New York University, where he remained until his retirement in 1968. Woodruff also founded an artist collective,Spiral, that provided African-American artists with a space to discuss art in politics and the civil rights movement. Although it was only in existence for three years, Spiral would become highly influential in the Black Arts Movement of the 1960s and 70s. 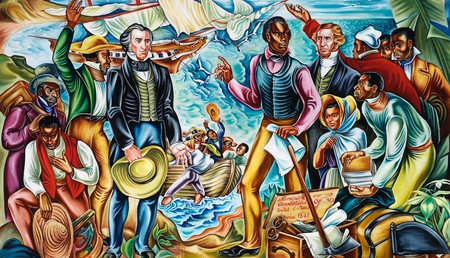 Woodruff’s name may be forgotten in some circles, but he remains one of the most important African-American artists and art teachers of his generation. His critical eye and vibrant flair for color long outlived the man himself (he died in 1980).

When admiring Woodruff’s work today, be sure to look closely: the artist always inserts himself somewhere in his paintings. He may be tucked away somewhere in the back, but his gaze can never be forgotten.