Controversial and Shocking Secrets Behind National Anthems Around the World 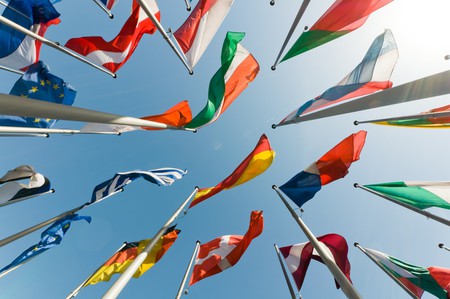 From a young age, the national anthem of our nation of birth is ingrained into our memory, designed to serve as a call of unification and pride in our home. But what do we know about national anthems outside of our country’s? In fact, many of us probably don’t even know the history behind our own anthems, or all of the words if it features verses rarely sung.

From withholding sex to Ricky Martin, check out several hidden facts about national anthems below, some amusing and some appalling.

By now, we’ve all heard of the controversy that has dominated a huge portion of American media ever since former San Francisco 49ers’ quarterback Colin Kaepernick refused to stand for the national anthem back in 2016. Whether you believe his, and all those who have taken a knee, motives in protest to racial injustice in the United States are valid, or if you think such actions are disrespectful, it’s important we acknowledge the sketchy roots of “The Star-Spangled Banner.”

The tune’s author, Francis Scott Key, was a slave owner who believed the African people to be “an inferior race,” and in writing the eventual U.S. anthem, he composed a third stanza that essentially asserts that the blood of the slaves who joined the the British forces at the promise of freedom has “wash’d out [the British] foul footstep’s pollution.” While some might disagree, claiming that the third verse has long been hidden so as to not offend the British, a lot of questions remain about the anthem’s intent and definition of “land of the free.”

We’ve heard that before …

Doesn’t it feel like all national anthems sound the same? Well, in some cases, this is very true. Estonia and Finland: same song. Tanzania, Zambia, and South Africa: all ripped off of the same song. Lichtenstein’s “High on the Young Rhine” is a copy of Britain’s “God Save the Queen,” or “My Country, ‘Tis of Thee” for the Americans.

Even the U.S. national anthem’s melody is derived from another song titled “To Anacreon in Heaven,” which was a drinking song written by an 18th-century gentleman’s amateur musicians club in London.

No sexy time until you write an anthem

When Mexican President Antonio López de Santa Anna declared that there would be an open contest to write the country’s anthem, poet Francisco González Bocanegra had no interest in entering. His fiancée, however, believed in his talents. So much so that one day she brought him into a bedroom in her parents’ house to engage in some consensual adult activities, but then instead locked him in the room, refusing to release him until he wrote some lyrics. Four hours later, Bocanegra slipped the 10 verses of “Himno Nacional Mexicano” under the door, winning the competition by a unanimous vote.

It seems this time, albeit temporarily, abstinence was an effective method.

As a British territory, St. Helena’s anthem is technically “God Save the Queen.” However, that hasn’t stopped the remote island from adopting its own song, “My Saint Helena Island.” Oddly enough a country and western ballad, the tune was written by a man named Dave Mitchell, who DJ’d on Ascension Island approximately 800 miles northwest of Helena. Amazingly, Mitchell never visited St. Helena, writing the song entirely off a few postcards his friend provided him with, but the island’s inhabitants fell in love with the record all the same.

The national anthem of Netherlands, known simply as the “Wilhelmus,” is the oldest known anthem in the world, dating back to at least 1572. Written by the leader of the Dutch Revolt, William of Orange, in first person, the first verse concludes with a rather unprecedented statement: “To the king of Spain I’ve granted / A lifelong loyalty.” Obviously, this claim would not stand for the Dutch people, who officially renounced King Philip II’s rule in 1581. However, for whatever reason, this lyric has remained in the nearly 450 years since its creation.

No wonder Spain beat the Netherlands in the 2010 FIFA World Cup final, right?

Similar to how the Netherlands name-dropped Spain, Italy gives a shout-out to Austria—but it’s all beef this time around. While the majority of “Il Canto degli Italiani” focuses on celebrating Italy’s unity, as well as constantly shouting, “We are ready to die!” (which we’re not convinced all Italians actually agree with), things get a little bitter in the final stanza when it references the obstacle the Austrian Empire presented in Italy’s quest for independent nationhood: “The Austrian eagle / Has already lost its plumes / The blood of Italy / And the Polish blood / It drank, along with the Cossack / But it burned its heart.” Ouch.

Strangely, “Song of the Italians” was only a provisional anthem up until it was made official this past November.

Neither Borat nor Ricky Martin wrote the anthem of Kazakhstan

Despite what many might believe—or, at least, want to believe—the Kazakh national anthem doesn’t declare it “the greatest country in the world,” or claim to be the “number one exporter of potassium”—which, it isn’t. However, that didn’t stop Borat’s parody from being mistakenly played at the 2012 International Shooting Grand Prix in Kuwait. It also didn’t stop the beginning of Ricky Martin’s hit “Livin’ La Vida Loca” from being accidentally played instead of the Kazakh anthem during the opening of a ski resort that same month.

“Menin’ Qazaqstanym,” or “My Kazakhstan,” is the name of the nation’s actual anthem. One of the newest anthems out there, it replaced its predecessor in 2006, and features lyrical contributions from the country’s president, Nursultan Nazarbayev. And we have to say, despite the suspect lyric “Our country is happy / Such is our country,” it’s pretty tight, as far as anthems go.

The most violent anthem goes to …

Vietnam’s”Tiến Quân Ca.” Sample lyric: “The path to glory is built by the bodies of our foes.” Enough said.