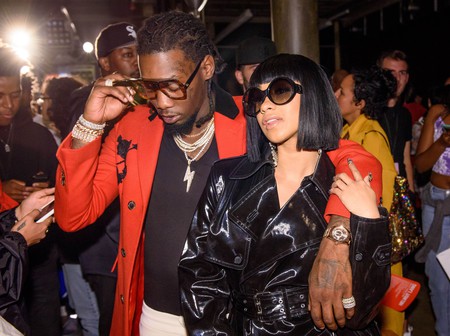 Offset of Migos and Cardi B | Zach Hilty/BFA/REX/Shutterstock

While September was a month for remixes, October saw a surge in exceptional indie releases.

Most impressive of the crop is Los Angeles’ Lo Moon, whose new track—the third released since their mysterious debut in September 2016—might be their best bet yet. “Thorns” is the slow burner that is meant to define a particularly passionate moment of an evening spent with a loved one, sounding something like a Phil Collins track written for the streaming era. Lo Moon’s slow reveal may be frustrating for fans who are eager to spin a full record, but the band is proving that even in today’s industry taking your time can yield great rewards.

On the hip-hop side of things, Future and Young Thug have officially sealed the peace agreement on their beef with the release of their Super Slimy tape, while Migos, who are looking to replicate the success of “Bad and Boujee” with their first cut off Culture 2, have smartly recruited hip-hop’s top female names in Nicki Minaj and Cardi B for “MotorSport.”

But this month’s top drop goes to Big K.R.I.T.’s double album 4eva Is A Mighty Long Time. While the first side is dedicated to Southern subwoofer slappers like T.I.-assisted “Big Bank,” the second side slows things down and allows the Mississippi native to achieve vulnerable majesty like never before. From a traditional lens, K.R.I.T. is indeed the current King of the South.

Oh, and Floating Points released a near-19-minute track that is probably, most likely the month’s best.

So, as the leaves continue to change, and eventually fall, listen to our October favorites below.