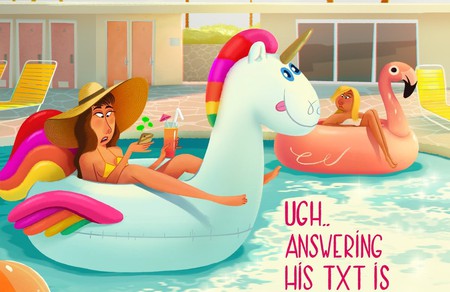 With so many hilarious and relatable Instagram accounts that repost overheard conversations from all over the world, we didn’t think there could be anything funnier. But we were wrong, because, as the saying goes, a picture speaks a thousand words.

Enter Avner Geller, an animator for DreamWorks whose personal illustration project #ThingsThatIHear is taking over Insta and the internet.

Instead of merely posting the funny exchanges he hears as quotes typed out on a blank background, he illustrates them! Basically, Geller creates a whole comic around the convos, adding a whole other layer of fun to what is surely the millennial version of eavesdropping.

When she’s right she’s right. #thingsthatihear I love getting ideas from you guys! This one is thanks to @rachael_derby I’d love to get some more fun Things that YOU hear. So comment below with something you heard or tag a friend that might enjoy this, and hopefully I can draw the ones that ring right. Thanks so much for your support!

The artist’s drawings are colourful, bold and slightly retro in style. His characters don exaggerated facial features and wonderfully dramatic expressions – the perfect complement to the absolutely bonkers phrases they utter.

May we all make better decisions in 2018. happy new year everyone! #thingsthatihear

No topic is off limits, from mocking the West’s current obsession with non-dairy milk (‘Oh, I only drink coconut milk eggnog’) to iPhone dependency and dating apps (‘Tinder is more fun than Candy Crush but way worse for my carpal tunnel’). Basically, the whole project is serious lols.

Getting into the holiday spirit #thingsthatihear

In an interview with My Modern Met, Geller explains: ‘The conversations reveal moments of public intimacy, hilarious contradictions and the discomforts of luxury – shining a light on just how ridiculous human existence can be in our modern life.’

The project is witty, irreverent, intelligent and just plain fun, taking the whole ‘overheard’ concept to the next level, one belly laugh at a time.