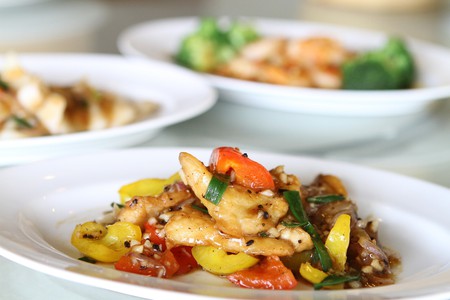 CHOW: Making the Chinese American Restaurant, the exhibit currently on view at the Museum of Food and Drink in Brooklyn (through summer 2017), explores the political and socio-economic forces that drove the rise of Chinese restaurants in America over the past century and a half. Here’s a very brief summary of what we learned there.

The first known Chinese restaurant in America, Canton Restaurant, opened in San Francisco in 1849. Today, the cuisine (though much of it bears little resemblance to any dishes you’d find in China) has become a favorite throughout the country, with nearly 50,000 Chinese restaurants across the U.S.

It originally arrived with the flood of Chinese immigrants to California in the mid-nineteenth century—mostly from Canton province—drawn by the Gold Rush and fleeing economic problems and famine in China. By 1880, there more than 100,000 Chinese people living in the U.S; restaurants had begun to crop up to feed the growing population of workers, missing the flavors of home. Of course, the dishes had to be modified to use ingredients that were available in the U.S. to replace those found only in China; they also were tweaked to make them more familiar to American palates. Soon, America faced its own economic downturn, in the 1870s. White workers felt threatened by Chinese laborers, who would work for less money. As a result, the Chinese Exclusion Act, a law forbidding Chinese immigration, was passed in 1882.

An exception was available to a few select groups; starting in 1915, merchants, including high-end restaurateurs, could apply—and many did, exploiting the exception. According to the exhibit, the number of Chinese restaurants in New York City alone quadrupled between 1910 and 1920. Well before that, however, late-1800s versions of hipsters were heading into the city’s Chinatown to seek new flavors to satisfy their adventurous palates. They discovered the novel flavors of Americanized Chinese dishes like chop suey and egg foo young, popularizing them to the point that they spread throughout the city. “By 1903,” the exhibit says, “over 100 chop suey houses existed between 14th and 45th Streets, from the Bowery to Eighth Avenue.” It spread across the nation, reaching a peak in the 1920s and ‘30s. Meanwhile, the restaurants also went upscale. That merchant visa available to Chinese restaurateurs? It was only for “high grade” restaurants, so the ones that opened featured high-end finishes and gilded carvings; going out for Chinese became a luxury experience.

The Chinese Exclusion Act was repealed in 1943. By that time, the cuisine had entered the mainstream and Chinese restaurants had become ubiquitous. Increased prosperity allowed Americans to dine out more often, and authenticity came into vogue. Classic Americanized dishes like chop suey were abandoned in favor of more-authentic regional Chinese dishes like General Tso’s Chicken, invented by a Hunanese chef in the 1950s and brought to the U.S. soon after. Today, the dish is the most-ordered Chinese dish on grubhub.com and the fourth most-popular dish on the website.

To see more about MOFAD’s exhibit, check out our video.