A Brief History Of Baked Alaska

Baked Alaska at the Oceannaire in San Diego, California | © vxla/Flickr

To some, it is known as omelette surprise, but to Americans, it’s nothing more than Baked Alaska: slices of sponge cake topped with a ball-shaped mass of ice cream encased in meringue – a patisserie made from egg whites and sugar. The dessert is typically flambéed or baked until browned. French chef Charles Ranhofer from New York icon Delmonico’s Restaurant lays claim to its creation, said to have been served to celebrate the purchase of Alaska in 1867. But glace au four has been making appearances in some form or another since the beginning of the 19th century.

Early versions of Baked Alaska appeared as early as 1802. According to historians, Thomas Jefferson was one of the first presidents to serve ice cream at a state banquet in the White House. As the story goes, Jefferson requested the ice cream to be served encased in a hot pastry. In 1804, American physicist Benjamin Thompson Rumford – who invented several cooking devices, including the double boiler and coffee percolator – was curious about the resistance of beaten egg whites to heat. What he discovered was a new dessert, naming it ‘omelette surprise.’ By the 1850s, ice cream ‘bombes’ – uniquely shaped molds filled with creamy custard before frozen – and meringue-encased desserts were popular at teas and formal dinners. Aunt Mary’s 1855 cookbook, The Philadelphia Housewife, was the first to feature a baked meringue, including ‘Apples aux Pommes’ and ‘Baked Alaska Apple Pie.’ 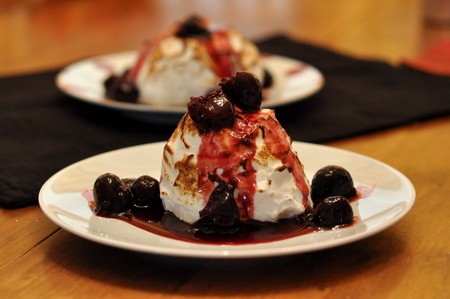 Within a decade, several renditions of Baked Alaska were circulating the globe. And although it was already a popular dish, claims about its genesis continued to be made. In 1866, French food writer Baron Leon Brise stated it was French chef Balzac who introduced the dessert to France; Charles Ranhofer, the chef at Delmonico’s in New York, is said to have put his new dessert on the menu to celebrate the purchase of Alaska from Russia in 1867, and it appeared in his cookbook The Epicurean as ‘Alaska, Florida’ in 1893. In 1895, French chef Jean Giroix from a hotel in Monte Carlo created a replica of the dessert named omelette la norvienne, or ‘Norwegian omelet.’ Baked Alaska continued to gain popularity under several monikers until its contemporary name appeared in The Original Fannie Farmer 1896 Cookbook. 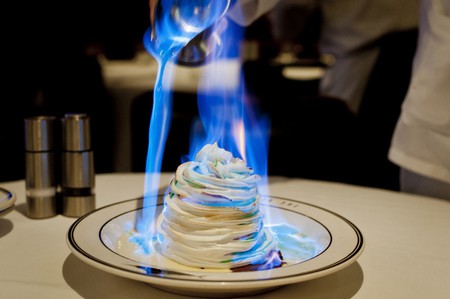 Baked Alaska at the Oceannaire in San Diego, California | © vxla/Flickr

Today, Baked Alaska is served in restaurants across the world. In the US, many restaurants feature a rum-doused meringue that is flambéed tableside, and in Hong Kong‘s version, Flame on the Iceberg, whiskey and syrup are poured over the dessert before being lit on fire. There’s even a ‘reverse Baked Alaska’ known as Frozen Florida, which features a hot toddy-filled frozen meringue.