7 Things John Steinbeck Taught Us About The Great Depression

The great John Steinbeck is best known for his works set during the Great Depression, particularly those that focused on migrant workers. The Grapes of Wrath, a winner of the National Book Award and Pulitzer Prize, and Of Mice and Men are two of his well-known works that are set during this highly stressful period. These books will teach anyone who reads them about the Great Depression, especially how it affected migrant workers. Through his works, Steinbeck was able to give a voice to the overlooked. 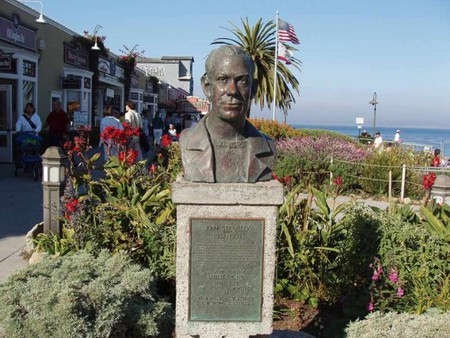 When It Rains, It Pours

The Great Depression started in August 1929 when the economy began to decline rapidly, and things continued to deteriorate when the stock market crashed in October of the same year. People lost their jobs and their homes, businesses’ profits fell dramatically, and so on. Add to that the terrible drought the Midwest experienced and things only got worse as the decade progressed.

Both Of Mice and Men and The Grapes of Wrath reference the ‘Dust Bowl,’ a natural disaster and name given to the time and area where drought and over-farming took a toll on the land of the Midwest. Years of drought combined with increased farming caused the land in the area — Oklahoma, Texas, and Kansas, in particular — to erode. Great dust storms occurred, endangering the area even more and forcing people away. This natural disaster, combined with the banks repossessing land and homes, left people with no choice but to leave and find opportunities elsewhere.

‘The bank — the monster has to have profits all the time. It can’t wait. It’ll die. No, taxes go on. When the monster stops growing, it dies. It can’t stay one size,’ writes Steinbeck in The Grapes of Wrath. People were already struggling and trying to hang onto what little they had. They tried to stay optimistic, thinking maybe, just maybe, the following year would be better for the land and their livelihood. However, once the banks began to fail, they started to take back the land they owned so that they could sell it and make a profit. People lost everything. 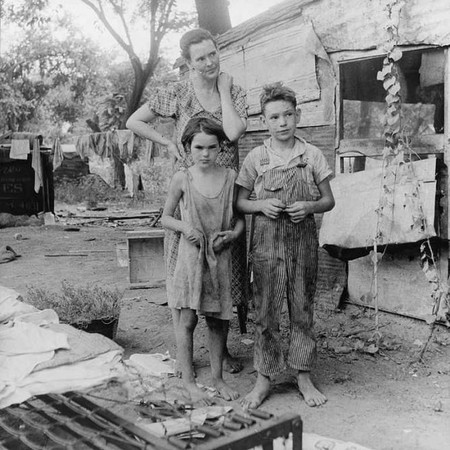 By focusing on migrant workers, Steinbeck, through his books and articles, showed that people did whatever they had to do in order to survive. Without anything left, people had no reason to stay where they were. They wanted to feed their families and keep them together, so they packed what little they had and left in search of greener pastures. Many headed west, by any means necessary, to California, where they thought things would be better. While that really wasn’t the case, they really had no choice; they needed to try.

Once migrant workers made it to California, they realized that things were not going to be any easier. They were seen as outsiders and referred to as ‘Okies,’ whether they were from Oklahoma or not. Not only were those people who were more fortunate suspicious of them, but so were the other field workers who were there before them. People were fearful. All they knew were that things were bad, and they didn’t know what was going to happen next. They were afraid of the unknown. People were weary of each other. Stress levels were extremely high. 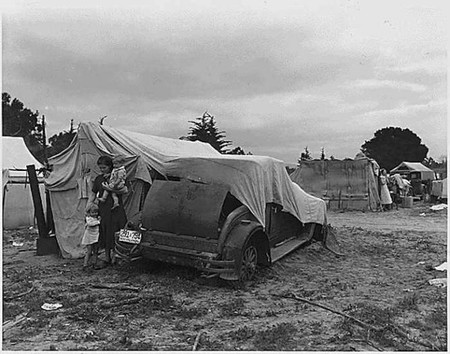 Most of the migrant workers headed toward Central and Southern California, the main agricultural areas of the state. John Steinbeck himself lived in Salinas, an area to which many people moved, looking for a better life. In the mid-1930s, he began writing a series for the San Francisco News called ‘Harvest Gypsies,’ from which The Grapes of Wrath was developed. Steinbeck visited these migration camps and saw the horrible conditions in which the workers lived. He wrote that they ‘have no homes, no bed and no equipment….’ If they did have houses, they was made of ‘corrugated paper’ with ‘a dirt floor,’ and there was ‘no toilet.’ Some people’s ‘homes’ were made of ‘a few branches.’ In the articles, Steinbeck even writes that the settlements, from afar, looked like ‘a city dump.’

While the living conditions were bad enough, the migrant workers during this time dealt with so much more. They didn’t have money for soap, because any amount of money they did have — and oftentimes they didn’t — went toward food. Babies were stillborn, or if they were born alive, they may only have ‘lived a week.’ While many of the people were alive, they weren’t living; their souls were broken. As the federal government started coming to the realization that the migrant workers were living in appalling conditions, they began to build camps with ‘simple’ living quarters, washrooms, toilets, and more – places that started to give those who lost all hope some of their ‘dignity’ back.