Mythical Places Around the World You’ll Wish Were Real 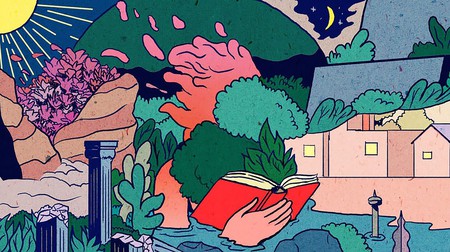 Over the course of millennia, mankind has dreamt up hundreds of beguiling places, shrouded in mystery and lost in time. While Plato told Greeks of the superior lost city of Atlantis, medieval farmers thought up places where gourmet cheese rains from the sky and naps make you money. These better worlds are the stuff of communal daydreams, gathered here to document the paradises of your fantasies.

The archetypical lost world, the sunken City of Atlantis was conjured up by Plato himself in two of his dialogues. The Greek philosopher mocked him for the grandiosity he attributed to the Bronze Age continent (contemporary historian Theopompus even made up another fictional island, Meropis, as a parody of Atlantis). He sketched a highly sophisticated civilisation comprised of several concentric islands, founded by demigods and rich in exotic fauna and flora. Plato also described the nation’s downfall. When the people there grew too hubristic, the ocean swallowed the land whole, though that doesn’t prevent it from having a prominent hold over mankind’s imagination to this day.

The Hanging Gardens of Babylon

Of all the enchanting places on this list, the Hanging Gardens of Babylon’s existence is the one in which people have put the most stock. After all, Herodotus categorised it as one of his Seven Wonders of the World.

However, numerous digs around the suspected location near the royal palace of Babylon have left archaeologists empty-handed time and again, sowing doubt as to whether it was anything more than a story. Historians haven’t given up the fight just yet though, considering other locations and other forms the gardens might have taken: for example, a collection of gorgeous rooftop gardens. However, until these theories are grounded in evidence, the Hanging Gardens must be consigned to fiction.

Merriam-Webster defines Shangri-La as a synonym of Utopia: “a remote beautiful imaginary place where life approaches perfection”. From the mind of British author James Hilton, the term first entered public consciousness in Lost Horizon (1933) as a reimagining of an ancient fictional paradise: Tibet’s Shambala Kingdom. Though thought to be the birthplace of Vishnu’s final reincarnation by Hindus, legends and mentions of this joyful paradise in the form of a Himalayan valley separated from the known world were around long before this organised religion. Hilton’s book popularised the myth in the West by having the hero of his tale find ultimate joy and fulfilment among the wise, immortal beings of Shangri-La.

A mythic world connected to Buddhist belief and, supposedly, hiding in the core of the Earth, Agartha is said to house a superb, wise civilisation. Theories of different possible access points to this tranquil, subterranean continent abound, from the South and North Poles to the Himalayan mountains – to the Mammoth Cave in Kentucky.

A particularly alluring vision in Celtic mythology is the supernatural land of Tír na nÓg (The Land of Ever Young). With an alleged location off the west coast of Ireland, this place – where five days equal three earthly years – is only ever seen by a lucky few. The trees, flowers and hills of this lush dwelling remain green year-round; no wonder the inhabitants never feel sad. It’s also said to home the Tuatha Dé Danann: a mythic Celtic people believed believe to have evolved into the Fae or Fairies that Ireland is so fond of. You’ll need their invitation to live with them in Tír na nÓg; once you get it, you can join them in drinking from crystal glasses and listening to the plucking of golden harps.

Oh, how European gold-rushers have salivated over El Dorado. The myth of this solid gold city – rumoured to be hidden somewhere deep in South America – drove many 16th- and 17th-century explorers, including Sir Walter Raleigh, to one unfruitful expedition after the next.

First popping up in 12th-century folktales before being committed to writing in 1250, the foodie abundance of Cockaigne – where cheeses rain from the sky and wine flows in streams – makes it endear. Even with our lives now immeasurably more comfortable than those of medieval peasants (who you can imagine could do with some daydreaming while ploughing through muddy fields), we still know about the most widespread idea of Utopia from 800 years ago. It’s a place where geese roast themselves, and rooves are made of bacon. It’s also where sexual freedom outdoes the Summer of Love, and sleeping is a well-paid job.

According to Norse mythology, Álfheimr is where the light-elves live, way up in the highest echelons of the world. It’s part of the Nine Worlds that comprise the universe. While some are burning hot places overflowing with lava or permanently clouded in mist, Álfheimr is a fertile place filled with the light and warmth. The elves are gracious demigods, described in the 12th century as “fairer to look upon than the sun”.

In a Japanese folktale, a fisherman rescues a turtle from a group of mean-spirited kids; his reward is a trip to the underwater Dragon Palace, or Ryūgū-jō. By holding onto the turtle’s back, he reaches a royal mansion made of red and white coral, or crystal (depending on who’s telling the story). The home of the Dragon King and the beautiful Dragon Princess, it has a different season on each side. Springtime cherry blossoms are visible from the east windows, with summertime sunflowers to the south. To get a glimpse of the aquatic splendour that the Ryūgū-jō holds, the Japanese believe that you have to find a rare Rumphius’ slit shell and look inside.

Only the cream of the crop makes it into Elysium or the Elysian Fields. The ancient Greeks’ version of heaven was deemed by Homer as a place of perfect happiness, sitting on the edge of the Earth with a soft breeze blowing over from the river Oceanus. While immoral souls were sent to perish in Hades’ underworld, the most virtuous and heroic of mankind – the so-called “deserving dead” – were selected to live here. It’s a land where golden fruit is plentiful; according to The Odyssey, “there falls not rain, nor hail, nor snow”.

Another one of the Nine Worlds is Asgard, home of the warrior gods or Aesir. Ruled over by Odin and his queen, Frigg, it’s connected to the land of mortal humans, Midgard, via a rainbow bridge: the Bifröst. Beyond Asgard lies Valhalla, Odin’s fabulous hall where the greatest warriors gather, as well as several gold and silver mansions for each god and goddess. It’s in many ways the Norse equivalent to the Greeks’ Mount Olympus, with both deity populations frequently getting rowdy on honey-based spirits.

Themyscira has recently re-entered public consciousness as the home of Wonder Woman in the DCEU. However, the legend of the Amazons’ island nation has been around a lot longer than that superheroine. An enchanted city-state, Themyscira is a nation of fierce female warriors, visited in Greek mythology by Heracles, Theseus and Zeus, among others. Imaginings of this paradise have changed hugely over the ages, although the current depiction on the silver screen is an ancient-yet-futuristic, blue-watered wonderland.

In Arthurian legend and Celtic myth, Avalon (the Isle of Apples) was considered the ultimate safe haven. After first extracting his sword Excalibur on the island as a young lad, this is where King Arthur was nourished back to health after his near-lethal battle with Mordred. In the earliest sources, it’s described as a land of plenty, where wild apple trees and vineyards grow of their own accord no matter what the season and British knights gather around their king to live in peace.

The stories of King Arthur’s court and the chivalrous men populating it have become timeless. Filled with jovial jousting tournaments on grassy hills, happy kids scampering, wealthy merchants and a hint of mysticism, the lavish castle city has captivated the imaginations of romantic souls everywhere since the Middle Ages prose.

Somewhere in the vast Libyan desert to the west of the Nile – in the driest, most unforgiving wilderness imaginable – there’s said to be a Shining City. Zerzura is a white-washed oasis in the mode of ancient Egyptian cities. It proved especially alluring among Arabians during the early 20th century, when even nomads had no clear idea of how the Sahara fit together. The elusive dwelling – full of palm trees, wells, treasure, and a sleeping king and queen – is guarded by giants and boasts a gate with a striking bird carved into it.