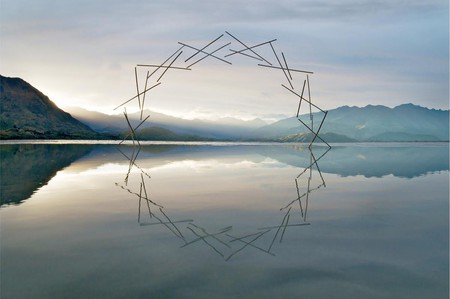 These mind-blowing works of art demonstrate artists’ ability to work in harmony with the earth to produce sculptures that provoke important questions about the relationship between humankind and the environment. We explore fifteen prominent works of land art, from American genre pioneers like Robert Smithson and Nancy Holt to contemporary Canadian stone balance artist Michael Grab.

Late American artist Robert Smithson was a world-renowned land artist known for what he termed his ‘earthworks,’ the most famous of which is his sculpture Spiral Jetty, constructed on the shores of the Great Salt Lake near Rozel Point, Utah. Comprised of over 6,000 tons of rock and earth from the site arranged in a counterclockwise coil jutting out 1,500 feet into the lake, Smithson’s Spiral Jetty is periodically submerged by rising water levels and was last visible again as of October 2015.

New Zealand-based artist Martin Hill’s oeuvre explores the relationship and potential for sustainability between human and non-human systems, focusing on environmental sculptures intended to eventually return to nature. His 2009 sculpture Synergy, a finalist in the 2016 Arte Laguna Prize land art category made in collaboration with partner Philippa Jones, is a series of non-touching raupo stems linked by flax threads held in suspended animation by the principle of tensegrity – one of the properties of tensegrity being synergy, or the effect of something greater than the sum of its parts. Though Martin and Philippa’s sculptures are created to be temporary, prints of their ephemeral works can be viewed and purchased at the artists’ studio and gallery in Wanaka, New Zealand.

Covering an area of 100,000 square meters of land in eastern Egypt where the Sahara Desert meets the Red Sea, Desert Breath is a site-specific work ‘addressing the desert as a state of mind.’ Created in 1997 by D.A.ST. Arteam – a group made up of three Greek creatives, artist Danae Stratou, industrial designer Alexandra Stratou and architect Stella Konstantinidis – the artwork has been subjected to natural weathering and erosion since its inception, though is still viewable via Google Earth almost 20 years later.

Michael Grab began experimenting with the art of stone balance in 2008 while exploring Colorado’s beautiful Boulder Creek, and what started out as a hobby quickly became a creative passion and meditative process for the Canadian-born artist and photographer. Using indentations on each rock to form a natural tripod, Grab has since created a number of his breathtaking, gravity-defying works of art across the globe in locations as far flung as Canada, Germany and Croatia.

Missouri-based artist Jeremy Underwood’s work explores the often complex relationship between humankind and the environment, with a specific focus on the tension between physical terrains and the cultural ideologies humans project upon the landscape, and his Human Debris series is no different. Composed of several site-specific sculptures crafted from trash and debris found in Houston, Texas’s waterways, Human Debris prompts viewers to question consumer culture and the all-pervasiveness of pollution.

The Clemson Clay Nest was a giant bird’s nest constructed in the South Carolina Botanical Gardens at Clemson University by German environmental artist Nils-Udo in 2005. Crafted from various natural materials the artist found on-site including sticks, foliage, berries and earth, Clemson Clay Nest stood in place on the grounds of the Botanical Gardens for two years until the structure was deemed no longer safe and dismantled. Other similar works have been sculpted by Nils-Udo at sites including Germany’s Lüneberg Heath and California’s Red Rock Canyon.

In a corner of southwest Scotland in Dumfries and Galloway, hikers are treated to a spectacular sight – Striding Arches, a series of three Dumfriesshire red sandstone arches dotting the landscape sculpted by British artist Andy Goldsworthy and meant as a celebration of and monument to the Scottish people. Goldsworthy has created other similar site-specific stone arches at locations such as the Cass Sculpture Foundation gardens in England and New Zealand’s Gibbs Farm sculpture park.

Christo and Jeanne-Claude’s – an artist duo and husband-and-wife team hailing from Bulgaria and Morocco respectively – monumental work Wrapped Coast (1969) saw one and a half miles of coastline at Sydney, Australia’s Little Bay swathed in meter upon meter of fabric and rope and involved a staggering 17,000 hours of production over a four-week period. Christo and Jeanne-Claude would return to this theme a number of times with projects including Wrapped Reichstag in Berlin and Wrapped Trees in Switzerland.

San Francisco-based artist Andres Amador creates his beautiful, but entirely ephemeral, earthscapes by painstakingly raking sand into entrancing geometric patterns, often over the course of many hours, before the tide washes them away. Though his chosen canvas is primarily the Northern California coast around his hometown, Amador has created his sand-based artworks at beaches across the USA and internationally at locations including New Zealand’s stunning northwest coast as part of Capturing Impermanence – a collaboration between Amador and filmmaker Jonathan Clark.

Using only materials found in whichever environ he is currently working in, innovative Swiss artist Sylvain Meyer has the power to transform and enchant an otherwise ordinary, familiar landscape with his breathtaking sculptures and installations which so far have included a spider crafted from moss and a snake-like work crafted from chestnuts. His 2009 work Ondulation was a series of concentric circles crafted from earth found in the terrain surrounding the Alps’ beautiful Mont Blanc.

Harvard University sociology lecturer by day and talented sandcastle artist in his spare time, Matthew Kaliner – also known by his moniker Sandcastle Matt – began producing his amazing creations in 2004 on Boston’s north shore and hasn’t looked back. Far from simple castles constructed with a kid’s bucket and spade set, Sandcastle Matt’s sculptures are striking, Gaudi-esque structures that seem to defy the laws of gravity. While a true artistic feat, Sandcastle Matt says of his works, ‘I am motivated entirely by the sheer joy of playing on the beach, and making something out of what I can find that day.’

In the remote high desert of western New Mexico lies late American sculptor Walter De Maria’s 1977 land art installation, The Lightning Field – a series of 400 stainless steel poles arranged in a grid shape designed to attract lightning strikes. Though the artwork is not open to the general public, The Lightning Field’s commissioner and managing body Dia Art Foundation offer overnight trips to the site from May to October.

American artist James Turrell is known worldwide for his work with light and sound, and his magnum opus, Roden Crater – an ambitious land art project converting the cinder cone of a dormant volcano in northern Arizona’s Painted Desert into a huge naked eye observatory – is the culmination of his oeuvre. Over 30 years in the making, the Roden Crater is as yet unfinished, though a select group of art aficionados were invited to visit the site for the princely sum of $6,500 in May 2015. Plans are in place to eventually open up the work to the public.

Nancy Holt, the wife of fellow land art pioneer Robert Smithson, gained acclaim across the globe for her large-scale public sculptures and installations before her death in 2014. Her best-known work, Sun Tunnels, is a series of four huge concrete tunnels laid in an X shape in the desert outside the ghost town of Lucin, Utah. Each tunnel is drilled with small holes laid out in the pattern of constellations (Draco, Perseus, Columba, and Capricorn, to be specific) through which visitors are invited view the surrounding remote landscape of the Great Basin Desert.

Contemporary American land artist Michael Heizer said of his 1970 work Double Negative, ‘There is nothing there, yet it is still a sculpture,’ and he wasn’t exaggerating. Composed of two long trenches measuring 30 feet wide and 50 feet deep cut into Nevada’s Mormon Mesa, the work is more a commentary on what has been removed from the site – that is, the negative space created by the trenches – than what the work actually appears as. Currently owned by Los Angeles’ Museum of Contemporary Art, Double Negative is open to the public and can be accessed by four-wheel drive.