12 Of The World's Most Extreme Restaurant Locations 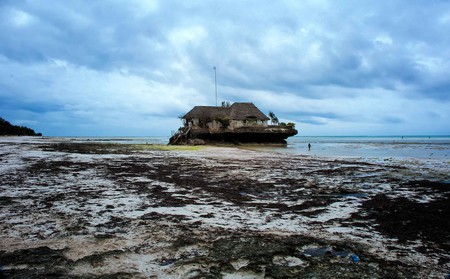 Unique dining experiences are one of the highlights of travel for adventurous foodies. These 12 restaurants take one-of-a-kind dining experiences to the next level, offering spectacular settings – from the treetops of Thailand to the bottom of the ocean – that complement inventive menus.

Sarnic Restaurant is located in a 1,000-year-old Roman cistern, a receptacle once used to collect rainwater. Set at the top of a hill in Istanbul, the restaurant takes its name from the Turkish word for cistern. Its grand interior features 30-foot-high brick ceilings supported by six enormous stone columns. Wrought iron accents, a large stone fireplace, and low lighting provided by hundreds of candles give the restaurant a hauntingly beautiful ambiance. In the summer, the restaurant’s naturally cool environment provides relief from the hot weather. 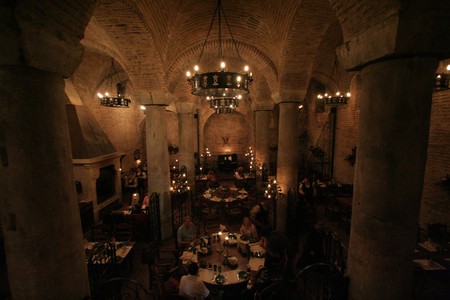 The Tree Pod is part of Soneva Kiri, a chic eco-resort located on the Thai island of Koh Kut. Up to four diners are seated in a bamboo pod which is hoisted 16 feet into the foliage of an ancient rainforest. Inspired by the appearance of the surrounding rainforest, the pod is made from woven rattan and resembles an enormous coconut hanging from the tree tops. Guests can enjoy picturesque views of the rainforest and the nearby sandy beaches. Pre-ordered dishes are delivered by personal servers using a zip-line.
The Treepod, Soneva Kiri Resort & Residences, RO Pho Cho Trat 4107 Rd, Ko Kut, Ko Kut District, Trat, Thailand +66 39 619 800

Not for those afraid of heights. Tree Pod dining is on offer at the stunning Soneva Kiri resort on Koh Kood and its a very memorable and unique experience #treepoddining #sonevakiri @sonevagroup

Located in China’s Hubei province, Fangweng Restaurant is carved into a limestone cliff in the Happy Valley of the Xiling Gorge. After passing through the restaurant’s unassuming gray entrance, patrons walk along a precarious path leading to the dining area, set several hundred feet above the ground. Part of the dining area is set over the cliff, while other tables are located inside a natural cave. Low lighting and traditional furnishings give the dining area an intimate, mysterious ambiance. The menu is a blend of local specialties and dishes commonly offered throughout Hubei province.
Fangweng Restaurant,Yemingzhu Rd, Xiling, Yichang, Hubei, China +86 717 8862179

The Rim is a fine dining restaurant set within Volcano House, Hawaii’s oldest hotel. The restaurant is positioned on top of the Kilauea Caldera, offering dazzling panoramic views of the Halema’uma’u crater. The view is particularly impressive at sunset, when diners can catch a glimpse of an orange glow rising above the crater rim which is created by molten lava. The restaurant menu highlights locally sourced meat, veggies, and seafood, including wild mushrooms and sweet potatoes grown on the Hamakua Coast.
The Rim, Hawaii Volcano House Hotel, 1 Crater Rim Drive, Volcano, HI, United States +1 808 756 9625

Named ‘the most beautiful restaurant in the world‘ by the New York Daily News in 2014, Ithaa is the world’s first undersea restaurant. Part of the Conrad Maldives Rangali Island resort, the restaurant takes its name a word meaning ‘mother-of-pearl’ in the Maldivian language of Divehi. The restaurant is set 16 feet below sea level, accessible via a staircase surrounded by a thatched pavilion. With all-glass walls, the restaurant offers dinners stunning 180 degree views of the surrounding coral gardens, as well as colorful fish, sharks, manta rays, and other aquatic life.
Ithaa, Conrad Maldives Rangali Island, Rangali Island, Rangali, Maldives +960 668 0629 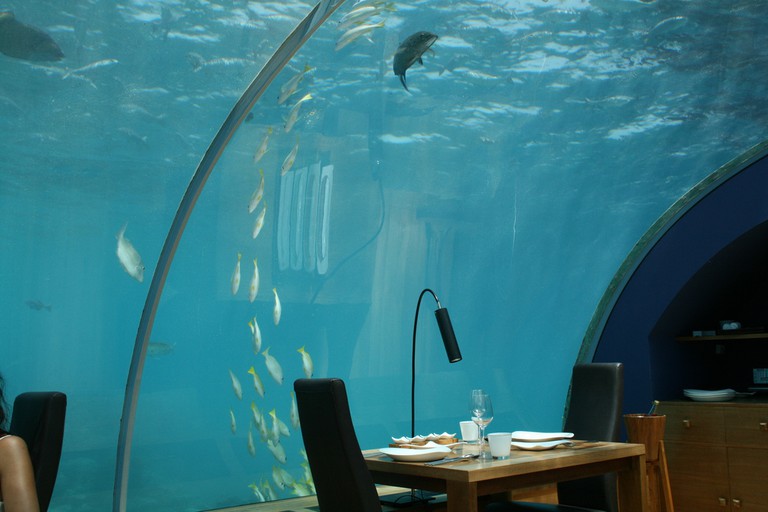 Restaurant, Asian
Facebook
Email
Twitter
Pinterest
Copy link
Share
At the Villa Escudero Resort in San Pablo City, guests can dine at the base of a powerful waterfall. The resort’s Labassin Waterfalls Restaurant features bamboo tables set in a few inches of spring water, allowing diners to soak their feet while admiring the impressive adjacent waterfall. Open for lunch only, the restaurant offers traditional Filipino dishes served buffet style. The waterfall provides a refreshing relief from the country’s humid climate, and many diners relax after their meal by lying against the tumbling water.

Set in a former fishermen’s post off the coast of Michanwi Pingwe beach, The Rock is located on top of a rock in the middle of the Indian Ocean. During low tide, diners can walk out to the restaurant from the shore, while a boat service is available during high tide. Specializing in fresh seafood, the tiny restaurant accommodates only 12 tables. It features a gorgeous patio overlooking the sea and a cozy interior topped with a Makuti palm tree roof. 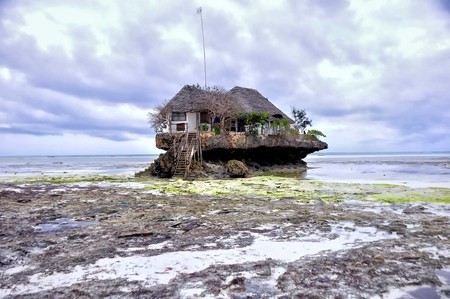 The Airplane Restaurant is set inside a grounded 1953 Boeing KC-97 tanker, accommodating up to 275 between the plane itself and an attached building called ‘the terminal.’ Inside the plane, seating is offered in booths along both sides of the central aisle. The plane’s left wing projects into the terminal seating area, which is decorated with aviation-related artifacts, including hundreds of photos. Patrons are free to explore the plane, including the cockpit, where it’s possible to sit in the pilot seat and try out the dials.
The Airplane Restaurant, 1665 Newport Rd, Colorado Springs, CO, USA +1 719 570 7656 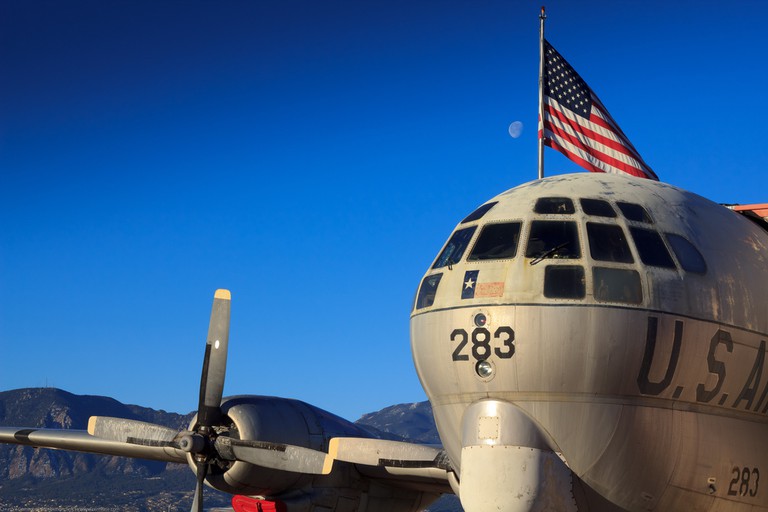 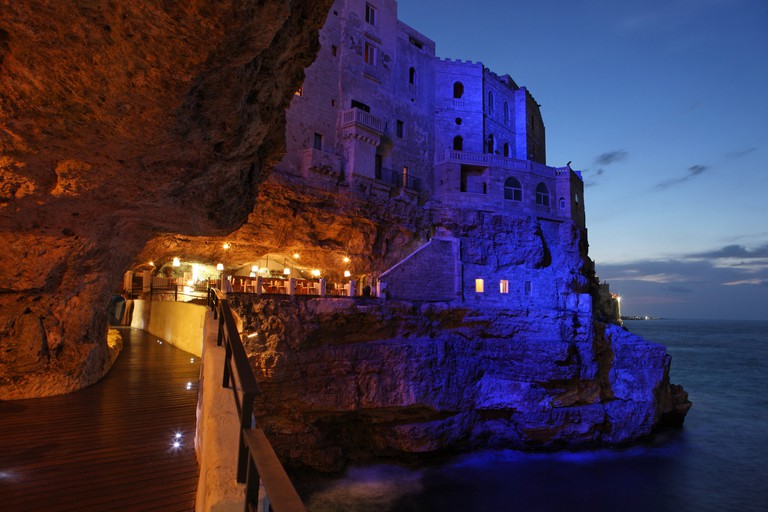 Ristorante Grotta Palazzese, Italy | © Prisma by Dukas Presseagentur GmbH / Alamy Stock Photo
The Ristorante Grotta Palazzese is built inside a limestone cavern overlooking the blue-green waters of the Adriatic Sea. Constructed 74 feet above sea level, the restaurant offers amazing views of the sea. Part of the Grotta Palazzese hotel, dinners for local nobility have been hosted in this secluded cavern since the 18th century. Located in the province of Bari, the restaurant is open only in the summer from May to October. It offers an ever-changing menu, with a focus on fresh seafood.

Located in the Finnish city of Kemi, the LumiLinna SnowCastle Restaurant is sculpted entirely from ice and snow. The restaurant is part of the larger SnowCastle, which also includes a SnowHotel and SnowChapel. Open from January to April, the restaurant is reconstructed each year using a special set of molds, and the interior temperature is always around 23° F. Patrons sit at tables made from ice, on chairs made from tree stumps covered with reindeer- and sheepskin.
LumiLinna SnowCastle Restaurant, Kauppakatu 29, Kemi, Finland +358 16 258878 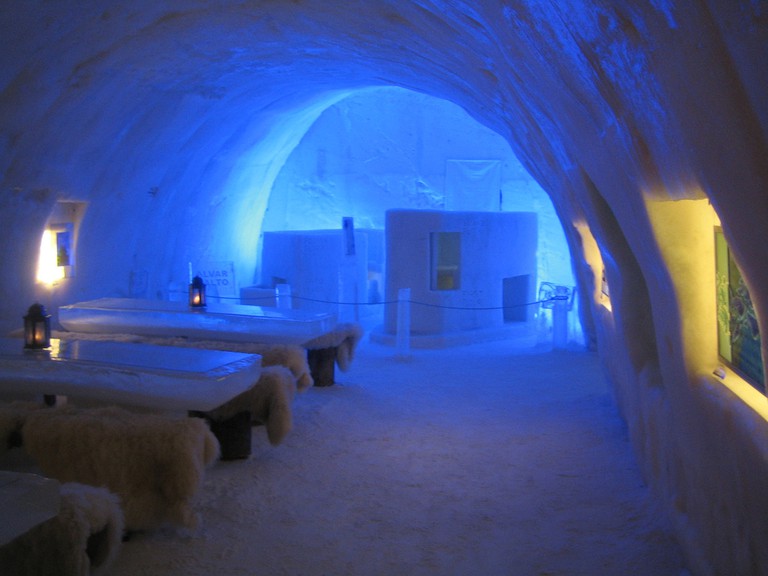 The fine dining restaurant at the Ngorongoro Crater Lodge is built on the edge of the world’s largest unbroken volcanic caldera. The restaurant’s wide terrace offers fantastic views of the grassy crater below, with wildlife ranging from big cats to wildebeests often visible with binoculars. The interior features a central fireplace and walls decorated with prehistoric cave paintings. The menu focuses on Pan-African dishes, with most of the meat, dairy, and veggies sourced from communities surrounding the conservation area.
Ngorongoro Crater Lodge Restaurant, Ngorongoro, Tanzania 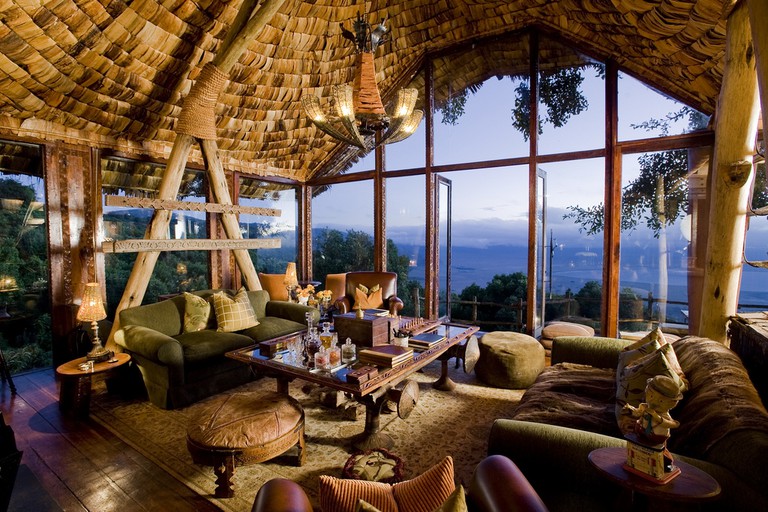 As its name suggests, the Redwoods Treehouse is set in a 30-foot-tall redwood tree in a forest near Auckland. Designed by New Zealand-based Pacific Environment Architects, Ltd, the treehouse was originally commissioned as part of the marketing campaign for the Yellow Pages phone directory. It’s now open permanently for private parties, weddings, and corporate events. The restaurant’s pod-like shape appears to wrap naturally around the tree trunk. Diners access the restaurant via an elevated walkway made from redwood milled on the site.
Redwoods Treehouse, 1415 State Highway 1, Warkworth, New Zealand 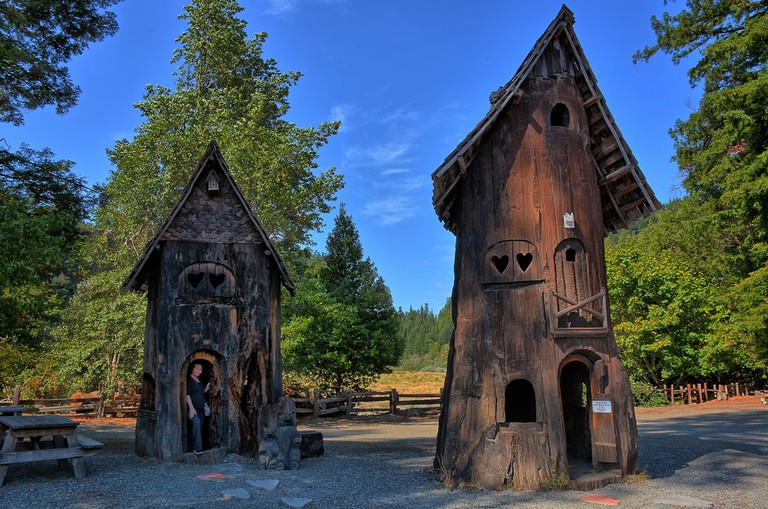