The Maya Angelou Biography: A Voice For Black America

Maya Angelou (commonly misspelled as Maya Angelo) was one of the most celebrated African-American writers of the 20th century and one of the most important literary voices of America, perhaps most famed for her autobiographical novel I Know Why The Caged Bird Sings (1969) and her pivotal involvement with the Civil Rights Movement. On November 20th, 2013, Angelou received the Literarian Award for Outstanding Service to the American Literary Community at the 2013 National Book Awards in New York City. Here, we look at the Maya Angelou biography, tracking her life and works. 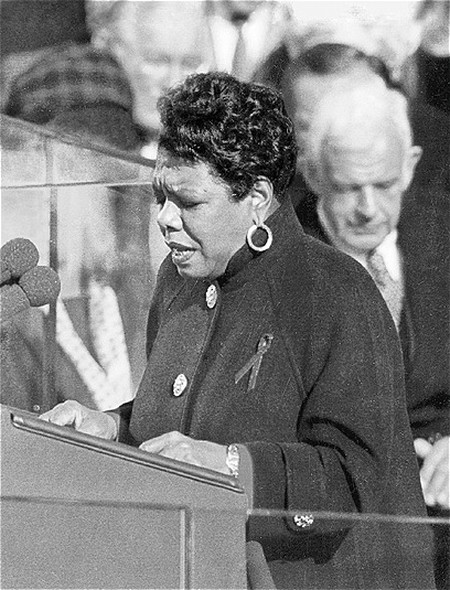 Maya Angelou reading at the presidential inauguration in 1993 | @Wikimedia Commons

Reflecting on her time working alongside Civil Rights leader Martin Luther King as the Northern Coordinator for the movement, Angelou recalled that they speculated on the likelihood of America having a black president together and Angelou predicted that it would not happen in her lifetime. Overjoyed to be proven wrong, at the ripe age of 83 she was one of President Obama’s most ardent supporters, campaigning tirelessly for his election. She continued to speak out on a range of topics throughout her later life, from the polarizing nature of celebrating ‘Black History Month’, to the detrimental effect of black rappers using the ‘N’ word, and reflected on her own life, which was characterized by optimism despite adversity.

Angelou accredited much of her development as a writer to her childhood growing up in the small town of Stamps, Arkansas with her paternal grandmother. Back then it was a town ravaged by racial inequality, affording the young Angelou her first taste of the injustices she would spend a lifetime trying to right. Her grandmother was the only black store holder within a very segregated community, her store was thus a gathering point for the black people in the area. It was here that Angelou first witnessed the strength and spirit of the African-American community when it drew together.

This fueled her involvement with the Black Arts Movement, a highly influential New York-based artistic collective. Unlike the Harlem Renaissance before it, the Black Arts Movement developed after the assassination of Malcolm X and was associated with the Black Power Movement; it therefore embraced a more radical, militant aesthetic. Angelou was one of the seminal figures of this group, primarily involved in the Harlem Writers Guild, along with figures such as Amri Baraka and James Baldwin who together opened doors for greater African-American creativity and empowerment. The assertive nature of much of this creative output inspired later generations to express their outrage at social injustice through creative means.

Maya Angelou’s contribution to American culture was recognized by President Obama when she was awarded the Presidential Medal of Freedom, America’s highest civilian honor in 2011.

Although she is not best known for her love poetry, Angelou is a poet who writes from the heart. When she published her autobiography I Know Why the Cage Bird Sings in 1969, she was praised for being the first African American woman who was able to discuss her personal life openly. This trend continues in her poetry, which is characterized by its autobiographical slant. While Maya Angelou love poems do not exist as a concrete collection, poems such as Remembrance, When You Come, and Touched By An Angel authentically get to the root of what it means to have an intimate connection with another person.

The breadth and range of Angelou’s work gives her a deserved place on our list of the 10 Best San Francisco Artists.
By Kate Kelsall